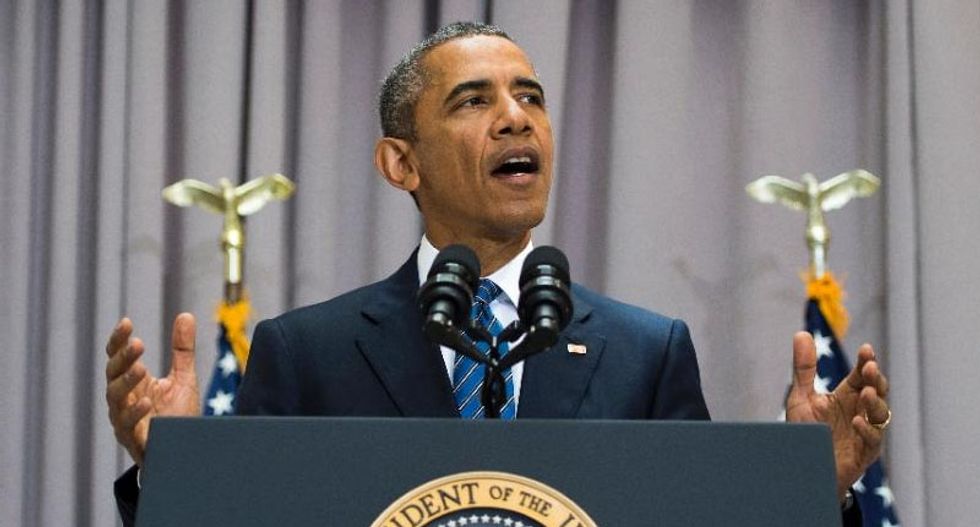 President Barack Obama made an aggressive case for his signature nuclear deal with Iran Wednesday, telling lawmakers that rejecting diplomacy would lead to war and destroy US credibility.

Casting it as "the most consequential foreign policy debate" since the Iraq War, Obama said Congress must not waver under pressure from critics whom history had already proven wrong.

"Congressional rejection of this deal leaves any US administration that is absolutely committed to preventing Iran from getting a nuclear weapon with one option: another war in the Middle East," he said.

"Many of the same people who argued for the war in Iraq are now making the case against the Iran nuclear deal," he added, urging lawmakers to instead choose a forsaken American tradition of strong diplomacy.

Obama was swept into office on a tide of anger over George W. Bush's decision to invade Iraq.

The invocation of the Iraq War will touch a nerve in Congress, particularly among the Senate Democrats whose 2002 vote for war helped launch the bloody eight-year conflict and marked their record.

Still, Obama said the vote this time round was bigger than any political career.

"If Congress kills this deal, we will lose more than just constraints on Iran's nuclear program or the sanctions we have painstakingly built," he warned.

Obama's remarks were made at the American University, in Washington, where in 1963 Kennedy used a commencement address to argue vehemently for peace amid a drumbeat of calls for military buildup against the Soviet Union.

Speaking a year after the Cuban missile crisis and months before his death, Kennedy cautioned against the use of US power to bring about "peace of the grave or the security of the slave."

Obama, brandishing his own record as evidence he is not weak or willing to appease, said: "I have ordered tens of thousands of young Americans into combat. I've sat by their bedside sometimes when they come home. I've ordered military action in seven countries."

He added: "There are times when force is necessary" and that time may yet come if Iran does not respect the deal -- but not yet.

The agreement would give Iran sanctions relief in exchange for curbs on its nuclear program, which Washington long believed was cover for building a bomb.

Congress is expected to vote on the issue within weeks.

Critics have angrily denounced Obama's rhetoric and what they say is a false dichotomy between war and peace.

The alternative to a bad deal, they say, is a better deal that not only subjects Iran to inspections and limits enrichment, but which also completely dismantles the nuclear program.

The debate has split Congress largely -- although not exclusively -- along party lines, with Republicans, who are in the majority, staunchly against the accord.

Obama will need to win the support of fellow Democrats like Senator Chuck Schumer in order to avoid having the deal rejected by lawmakers.

Here, history has proved as much of a burden as an aid to Obama.

Iran's antagonism toward the United States, Israel and support for terror groups in the Middle East since then has given many lawmakers pause, with a number of Democrats already breaking ranks.

Obama admitted that Iran might use cash coming its way under sanctions relief to fund "terrorist organizations."

But he said that was preferable to an Iran armed with a nuke.

Obama singled out Israel as an opponent of the deal, but said it would also benefit from an Iran blocked from gaining nuclear weapons.

"No one can blame Israelis for having a deep skepticism about any deals with a government like Iran's," the US leaders said.

But he added "a nuclear armed Iran is far more dangerous to Israel, to America, and to the world than an Iran that benefits from sanctions."