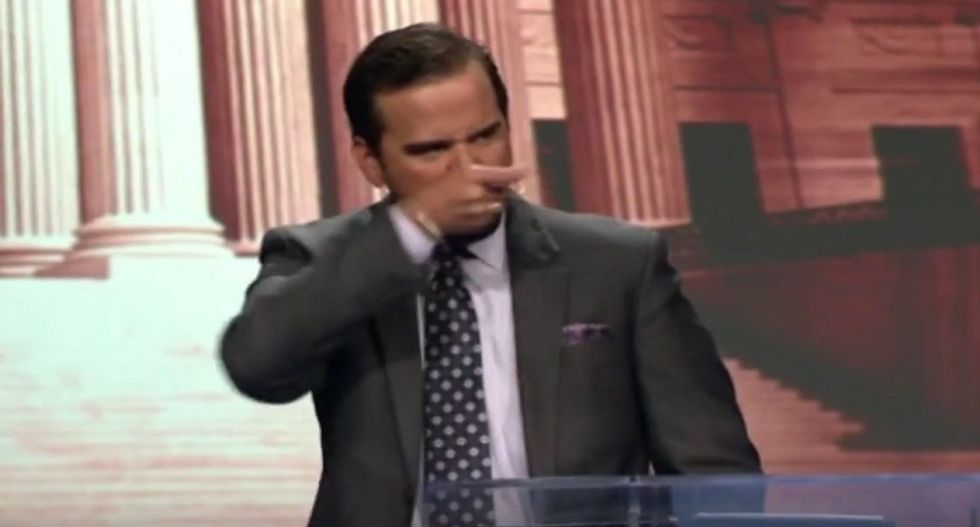 While telling his father's church about how much he values human life, Matthew Hagee thanked God for giving him a finger he can use to pull the trigger in a recent sermon, Right Wing Watch reports.

Hagee, the son of John Hagee, gave the talk at the elder Hagee's Cornerstone Church on Sunday, in which he said that teaching the theory of evolution has killed 55 million Americans.

"Evolution is a lie from the pit of Hell itself," Hagee said. "And it has cost us 55 million Americans."

Hagee discussed discredited, heavily-edited propaganda videos made by the Center for Medical Progress, a group that sneaks into women's health clinics and a recent National Abortion Federation convention to get footage which it then manipulates and shares to make it look as though Planned Parenthood exists as a profit racket to sell fetal tissue.

"God help a country that is more concerned about a lion in Zimbabwe than we are 55 million children that we've murdered in a senseless, senseless fashion," he yelled at the cheering crowd.

"How did we do it? I'll tell you how, we taught ourselves to do this," he continued. "We went to classrooms where they didn't tell us that we were made by God our Creator. They told us that we were the highest form of a scientific process called evolution. ‘There’s just one little chromosome between us and Cecil the lion.’ Thank God for that chromosome, because it gave me a finger and I can use it to pull the trigger!”