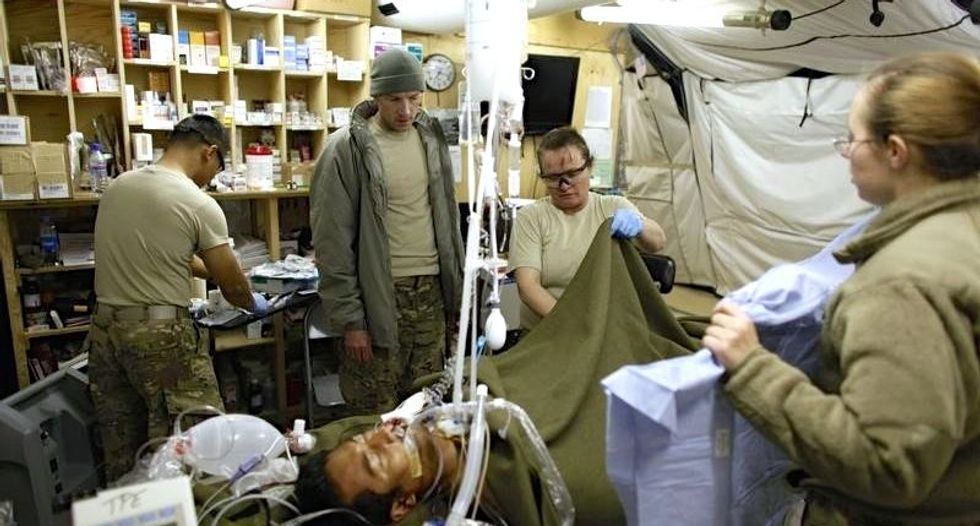 A U.S. Defense Department system for tracking and helping speed blood supplies to combat field hospitals does not work, threatening to cause blood shortages for wounded soldiers, according to a Defense Department Inspector General report.

The Theater Blood Application, introduced in 2011, is now in use at more than 249 sites, Defense Health Agency spokesman Kevin Dwyer said.

The Inspector General’s report, dated July 17, 2015, and released last week, said the system was built to faulty specifications. As a result, it said, the system does not meet basic needs for “a blood-tracking tool to ensure accurate blood inventory, patient safety, and deliver high quality products to support the warfighter.”

It recommended halting further spending on the project until the faults can be fixed.

Dwyer disputed the Inspector General's finding that the system could cause shortages where blood is needed urgently. He said individuals can correct problems and redirect blood if the system cannot properly handle demand.

The report said no information was available on how much had been spent on the project, and how much more it would cost.

The system was meant to automate the tracking of blood inventory, beginning with individual donors through delivery and use in a combat zone medical facility. It replaces a system that required manual entry of data into Excel spreadsheets, which the report said caused frequent errors.

Akimeka did not respond to a request for comment.

The report said the specifications omitted a list of essential requirements that had been drawn up earlier. “There was no clear connection from the user needs to the awarded contract,” the report said.

The report said the new system was designed with another basic flaw. The Pentagon is moving to integrate all medical records into a single Defense Department-wide system. That system is being built to replace scores of separate, antiquated computer databases. The Theater Blood Application is incompatible with the new overall database and so can’t feed information into it.

The problem is consistent with Defense Department-wide faults in adopting modern computer systems to replace thousands of antique systems built with no coordination since the 1960s. Those faults were detailed in a 2013 Reuters series titled “Unaccountable: the high cost of the Pentagon’s bad bookkeeping.” As reported in that series, waste from failed new systems has totaled billions of dollars in recent years. The series can be read at reut.rs/1cH1F7I.

Battlefield injuries often require large amounts of transfused blood. Surgeons say that sometimes more than the entire amount of blood in a patient’s body has to be replaced before blood loss can be stopped.

Trauma surgeons who spent extensive time in Iraq and Afghanistan said a faulty inventory system could create blood availability problems where there were none before.

Six surgeons said they had never experienced blood shortages in Iraq or Afghanistan. The biggest problem, they said, was waste from having too much stored blood, which ended up expiring.

Joseph Rappold, a former Navy trauma surgeon who served multiple tours in Iraq and Afghanistan, said there was “40% to 60% wastage in Iraq,” far more than in civilian U.S. blood banks. “This was just a necessary evil, making sure there was adequate blood supply.”

The surgeons said that when blood stores ran low, they had a ready supply from a “walking blood bank,” soldiers who lined up by the field hospital to donate blood when needed. The practice has been faulted because the blood isn’t screened for diseases that can be transmitted by transfusions.

Canada's Trudeau wins another minority, sees 'clear mandate to get through this pandemic'

Canadian Prime Minister Justin Trudeau hung onto power on Monday as his main rival conceded defeat, but his Liberals fell short of his goal for a majority win.

Trudeau, in power since 2015 and governing with a minority of House of Commons seats since 2019, decided to gamble on an early vote and capitalize on his government's handling of the pandemic, which included massive spending to support individuals and businesses and a push for high vaccination rates.

Abortion rights advocates geared up for a major fight as the U.S. Supreme Court announced Monday it will soon hear arguments in Dobbs v. Jackson Women's Health Organization, a case in Mississippi which poses a direct challenge to Roe vs. Wade.

The high court confirmed it will consider the case December 1 after months of speculation regarding when it would take up the dispute over Mississippi's ban on most abortion care after 15 weeks of pregnancy.