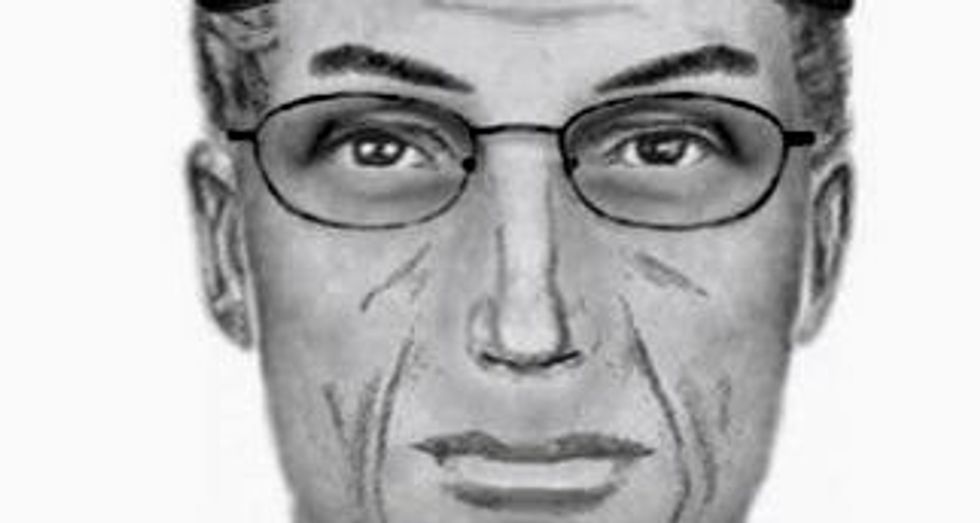 An unidentified suspect wanted in connection with a kidnapping and murder near Bakersfield, California is shown in this police sketch released to Reuters August 4, 2015. REUTERS/Kern County Sheriffs Office/Handout

Police were searching remote deserts and foothills in Central California on Tuesday for a unidentified fugitive with survivalist skills wanted in a brazen crime spree that a includes a kidnapping and the murder of a retired dentist.

The man, last seen wearing military-style clothing, was being sought in the jagged foothills and high desert areas east of Bakersfield but has not been heard from since opening fire on sheriff's deputies who cornered him in a trailer on Saturday evening, Kern County Sheriff's spokesman Ray Pruitt said.

Two deputies suffered non life-threatening gunshot wounds in that incident and the gunman, described as dirty with sun-weathered skin, was able to escape.

"It's a remote area with very rugged terrain. Isolated, sparsely populated, a lot of it is high desert terrain; other parts are mountainous," Pruitt said.

"I'm told there are caves in the area, there are mines, unoccupied homes, outbuildings, just a lot of places for a person to hide," he said. "We know that on two or three occasions he made entry into unoccupied homes and was able to obtain firearms and supplies."

Pruitt said some 75 people, including Kern County deputies, support personnel and authorities from other jurisdictions, were taking part in the search, both on foot and using air support, and were urging residents to be on guard.

"We would consider this suspect extremely dangerous and most likely armed," he said, adding that the man, described only as white and likely in his early 30s, appeared to have knowledge of the area and survival skills.

Temperatures in the area have soared to nearly 100 degrees (38 C) in the past few days, Pruitt said, making conditions even more difficult for both the wanted man and authorities hunting him.

The string of violent crimes attributed to the suspect began on July 28, when authorities say he held three young men at gunpoint in a cabin where he may have been squatting. When the men escaped their assailant fled, possibly by stealing a pick-up truck.

Two days later the former dentist, David Louis Markiewitz, was shot to death in a cabin about 10 miles (16 km) away.

Members of the Kern County Sheriff's SWAT team tracked the suspect on foot for two days following the murder until he eluded them after the gunfight that left two deputies wounded.