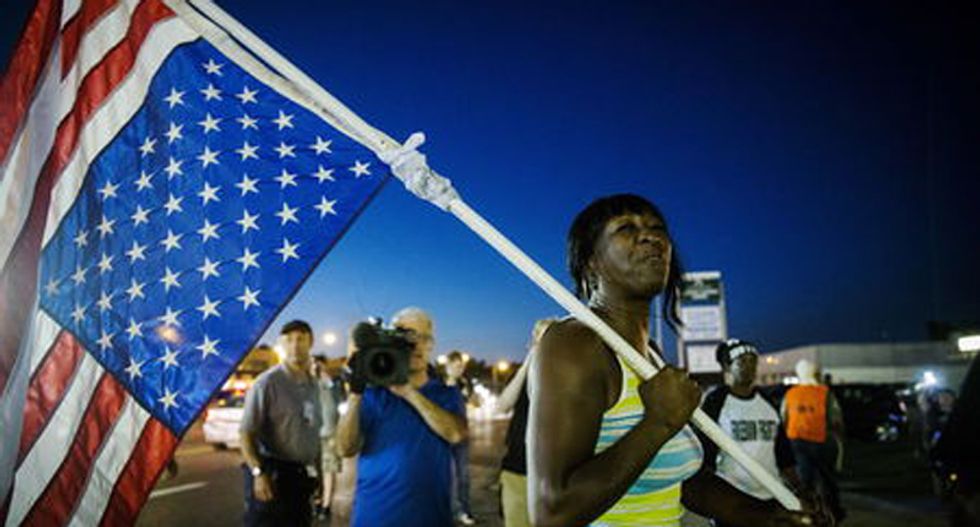 Riot police clashed early on Tuesday with protesters in the streets of Ferguson, Missouri marking the anniversary of the police shooting of an unarmed black teen whose death sparked a national outcry over strained race relations. 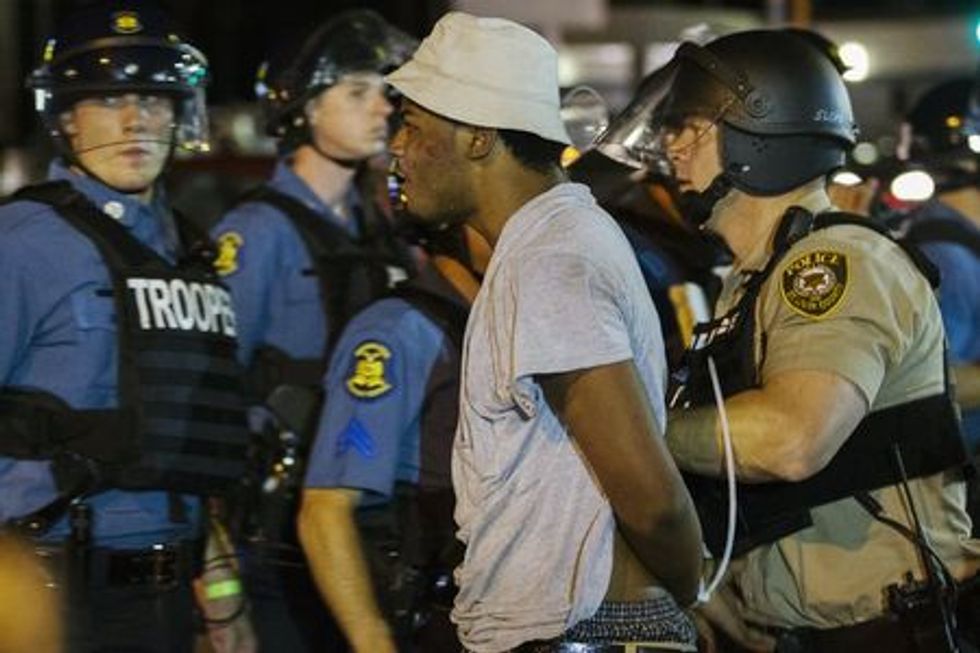 About 200 demonstrators, some waving flags, beating drums, and shouting anti-police slogans, marched along a street that was a flashpoint of riots that erupted last year after white police officer Darren Wilson killed 18-year-old Michael Brown.

Police carrying shields rushed into a crowd of protesters around midnight, prompting many to scream and run away. Twenty-three people were arrested, some for throwing frozen water bottles and rocks at officers, according to the St. Louis County Police Department. 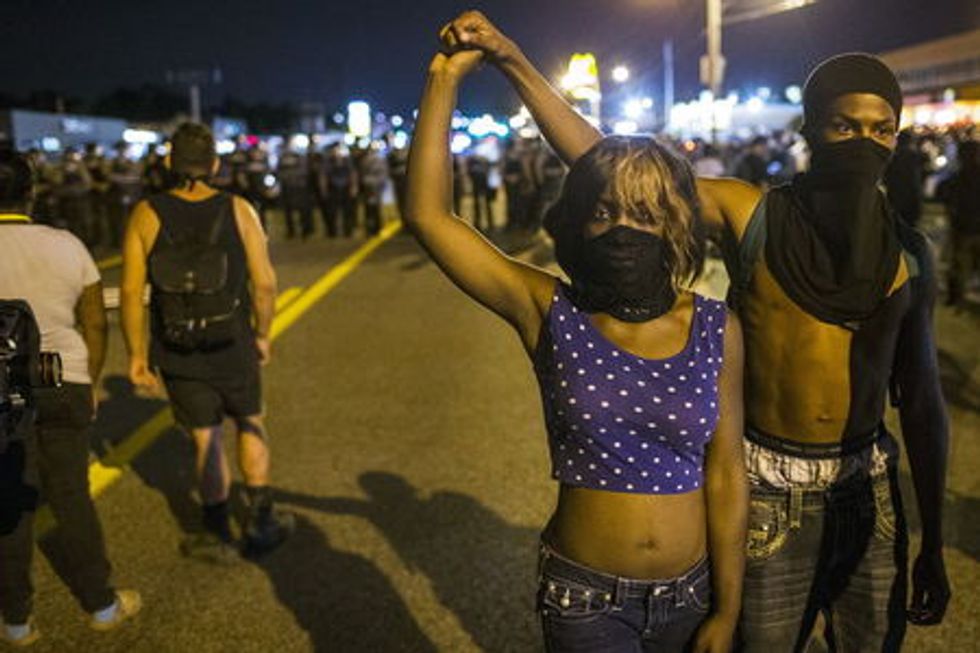 Authorities declared a state of emergency on Monday for the St. Louis suburb and surrounding areas after police officers shot and critically wounded a man in an exchange of gunfire Sunday night, marring what had been a day of peaceful demonstrations to commemorate the anniversary.

Ferguson resident Roberta Lynch, 51, one of the demonstrators on Monday evening, said relations between police and the community had improved little over the past year.

"They are doing the same old stuff, taking our rights," Lynch said. "They need to give us our space." 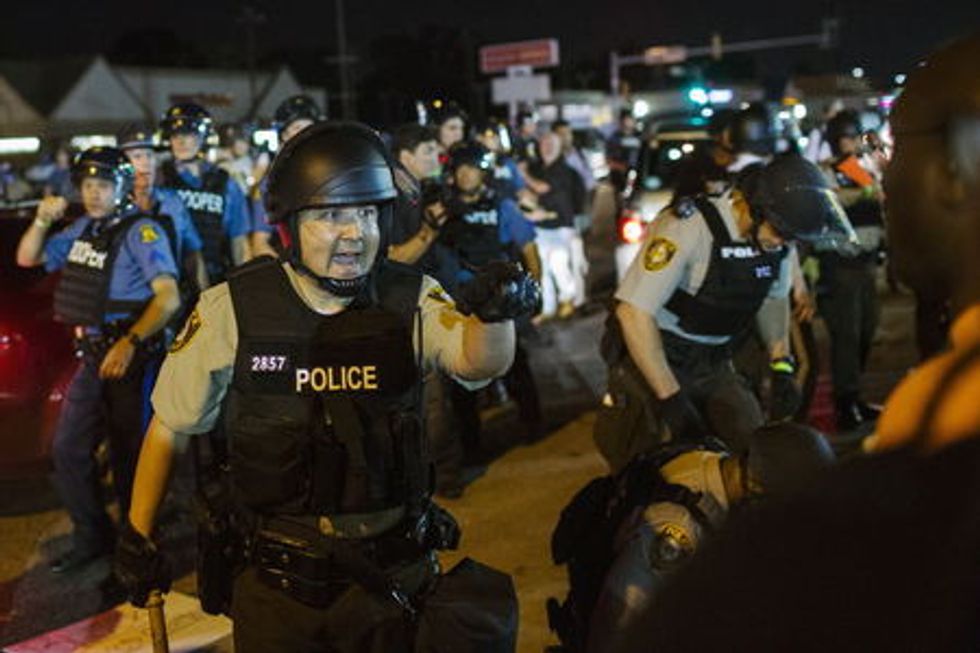 Monday's demonstrations capped a day of civil disobedience called by activists to protest against the shooting of Brown and other unarmed black men by police across the United States.

Clergy and civil rights groups led a series of protests, staging a demonstration at a courthouse in St. Louis where 60 people were arrested, including Princeton University professor and activist Cornel West, according to a protest organizer. 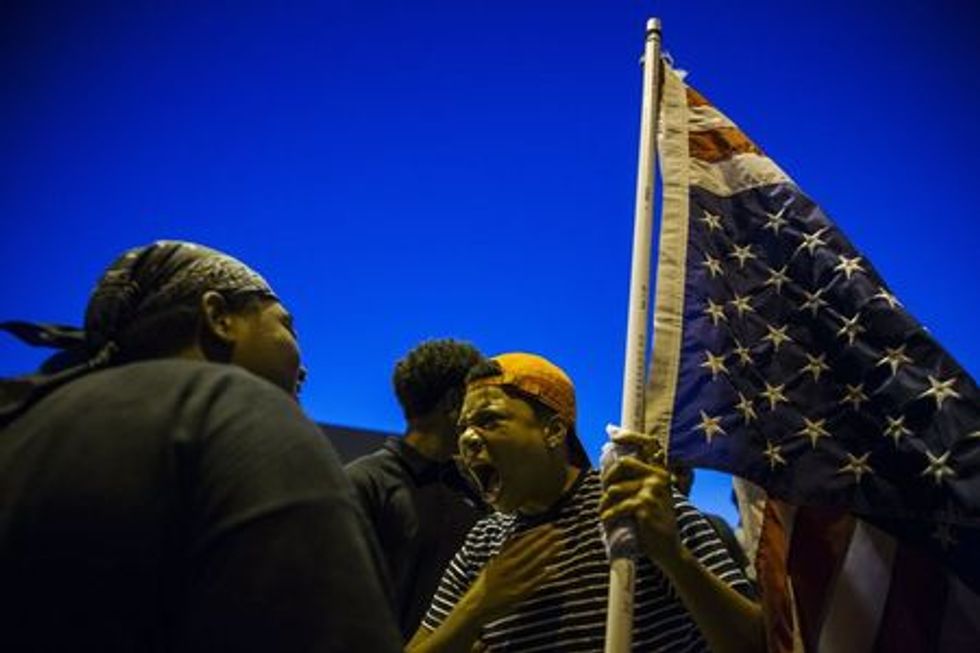 Protesters scream as they march in protest in Ferguson, Missouri August 10, 2015. REUTERS/Lucas Jackson[/caption]

Police arrested several dozen other protesters who blocked rush-hour traffic on Interstate 70 a few miles from Ferguson hours later, according to a Reuters witness.

The death of Brown and a grand jury's decision to spare the white officer from criminal charges provoked a wave of demonstrations that boiled over into rioting and arson at times and spawned sympathy rallies across the country. 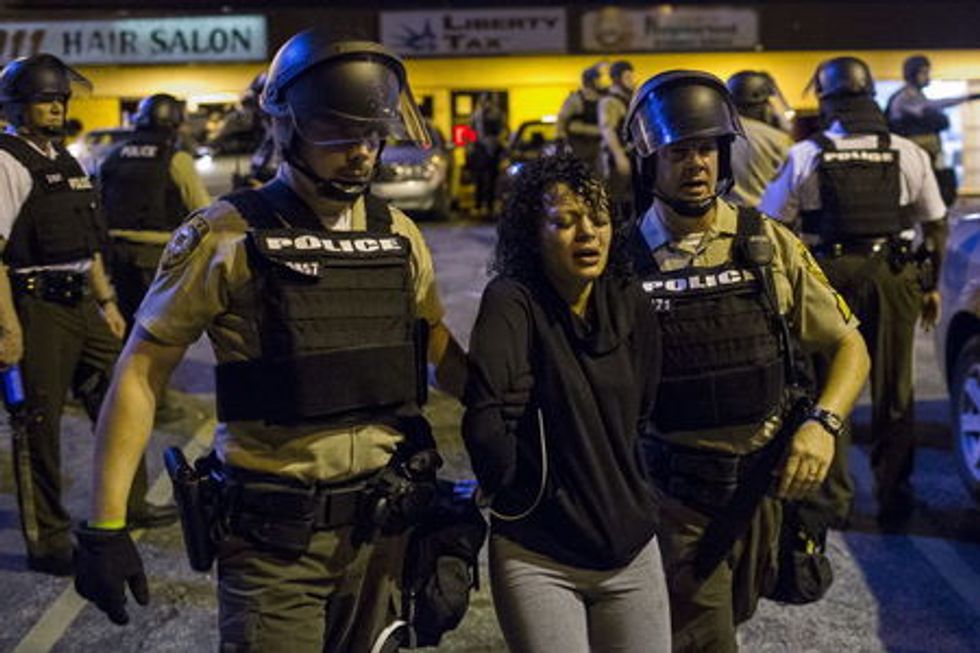 In Ferguson, tensions rose after darkness fell on Monday, with some demonstrators throwing objects at officers who pushed back with shields. Small unmanned aerial drones circled above the crowd. It was unclear who was flying the drones. 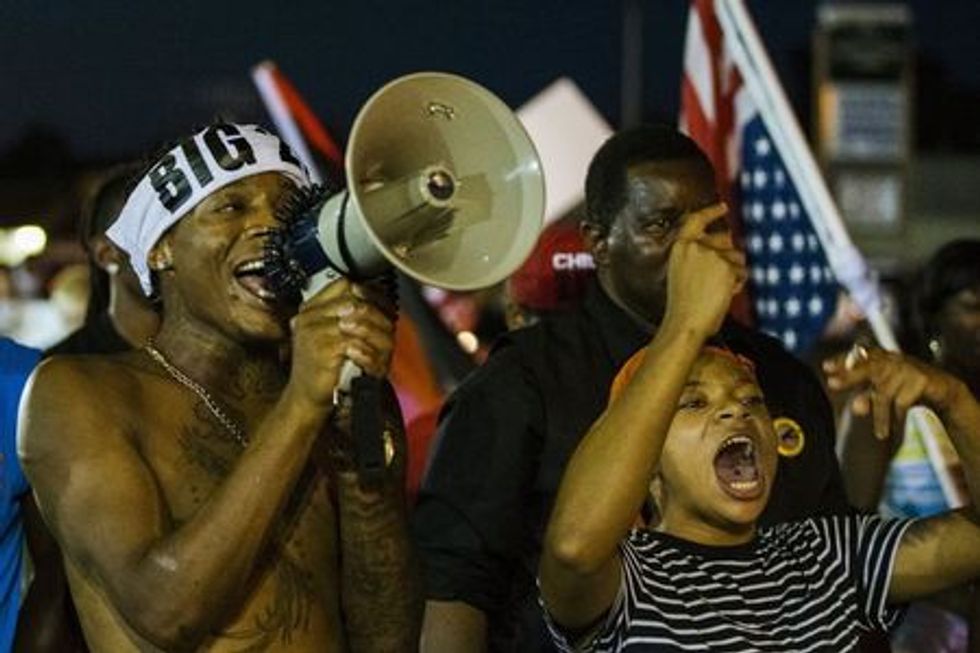 Demonstrators scream as they march in protest in Ferguson, Missouri August 10, 2015. REUTERS/Lucas Jackson[/caption]

Others protesters called for calm on the streets. By early morning, most people had vacated areas where confrontations had occurred and police reopened streets to traffic.

There were no shots fired, looting or property damage and no injuries were reported by police or civilians, the St. Louis County Police Department said. 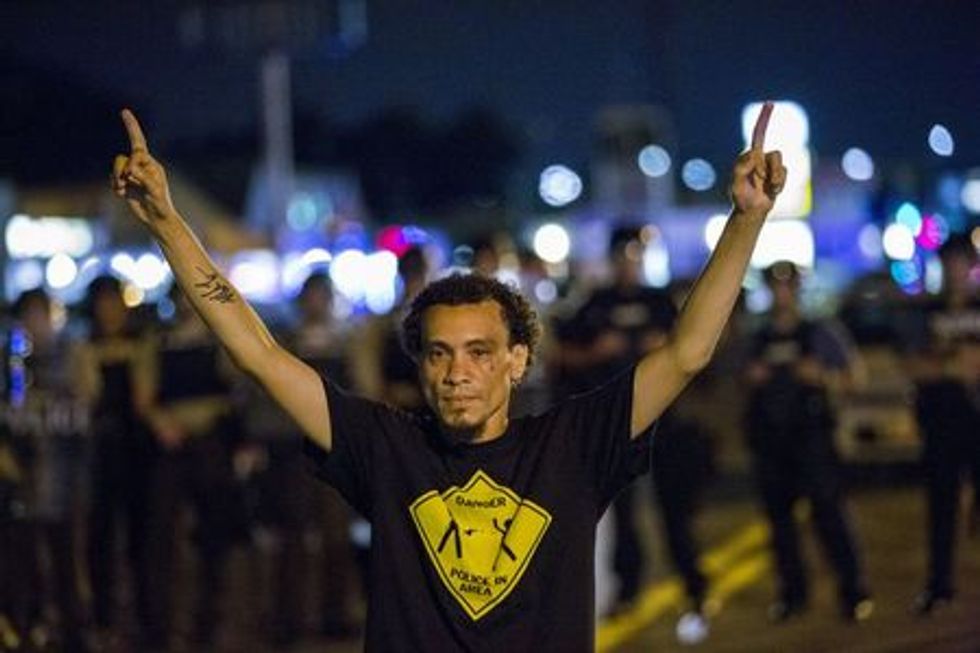 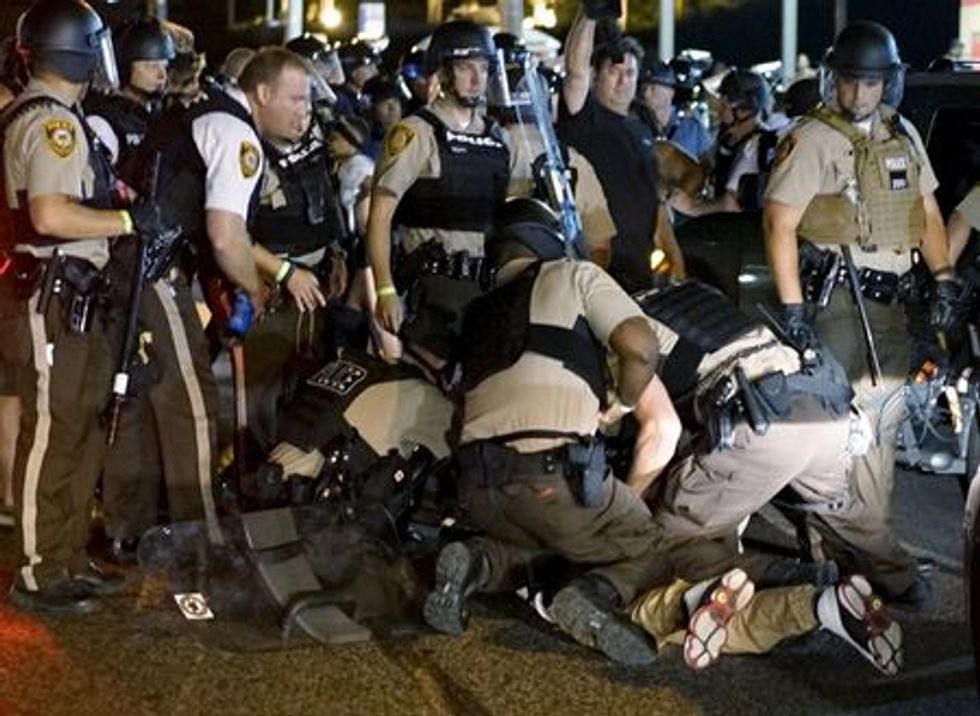 "We are going to let them vent and we are going to manage it the best we possibly can. Last night was pretty out of control at times. Unfortunately, all the good work that's happening on both sides of the street has been marred by violence."

The violence, according to Belmar, erupted Sunday when two groups of agitators apparently began shooting at each other, disrupting what had been peaceful demonstrations. At one point, a gunman darted across a parking lot and was confronted by four officers who pulled up in an unmarked vehicle.

The officers wounded the suspect critically in an exchange of gunfire, according to police.

Prosecutors charged the man, Tyrone Harris with four counts of assault on law enforcement, five counts of armed criminal action, and one count of shooting at a vehicle. His bond was set at $250,000.

Harris's father said his son, who was hospitalized, did not have a gun. "He was running for his ... life because someone was shooting at him," Tyrone Harris, Sr., said in a telephone interview from his St. Louis-area home.

The younger Harris was out on bond awaiting trial on charges from November of stealing a motor vehicle, theft of a firearm and resisting arrest.

Activist groups said the plainclothes officers who shot Harris should never have been deployed to the scene.

Michael Brown's father, Michael Brown Sr., said on Facebook that the peaceful weekend protests were "meaningful, inspiring and successful ... With your support, we properly honored your friend and my son's memory."

Protester Rayna Martin, 17, who lives in the neighborhood where Brown was shot, said the violence within her community has been made worse by the actions of police. "They kill us, they get away with it. It's crazy," she said.