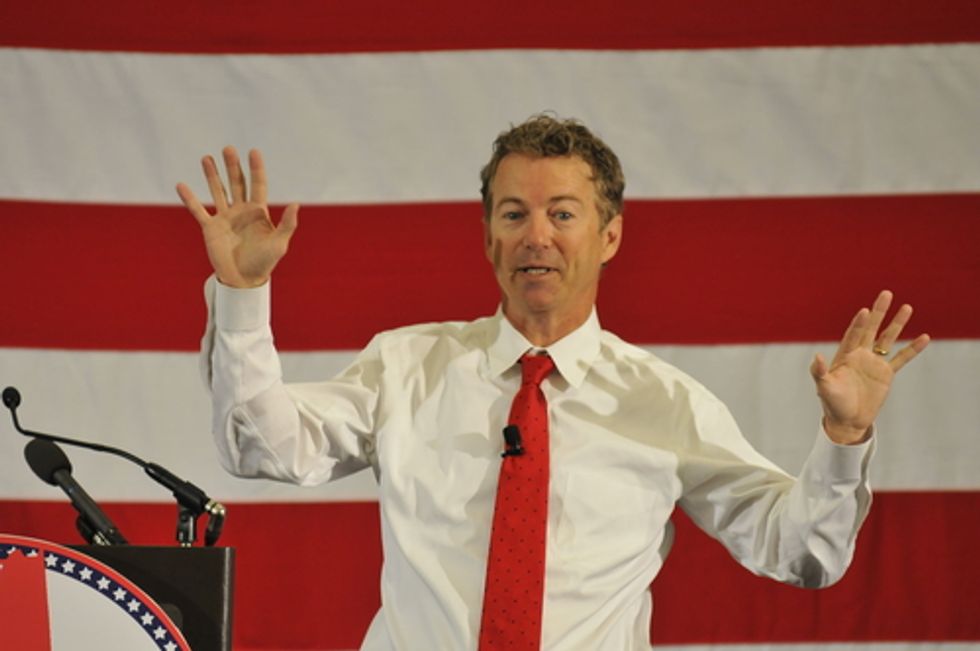 Whee! Look at me! I swear I'm different than those other guys!

Rand Paul's schtick is that he's not a conservative, he's a libertarian. Like most libertarians, he pretends this is about some principled opposition to state overreach, instead of just a pseudo-intellectual justification for removing protections against labor abuse and discrimination while also stripping away the social safety net, all for the purpose of creating a permanent underclass that is disproportionately composed of people of color. He has been trying to prop up this facade by claiming that he isn't racist, oh no, he wants to help black people by fighting the war on drugs!*

But the pressures of the election cycle are clearly getting to him. Turns out that the base is less interested in principled libertarianism and more interested in attacking anti-racism activists and their concerns. So as conservatives grossly try to exploit the horrible murders of two journalists working for WDBJ out of Virginia to silence discussion about ongoing race problems in this country, Rand Paul hopped right on board.

"I think they should change their name maybe, if they were ‘All Lives Matter’ or ‘Innocent Lives Matter,'" Paul told Sean Hannity last night, in regards to the Black Lives Matter movement. "I am about justice, and frankly I think a lot of poor people in our country, and many African-Americans, are trapped in this war on drugs and I want to change it. But commandeering the microphone and bullying people and pushing people out of the way I think really isn’t a way to get their message across.”

What the tactics have to do with the name, I don't know. And frankly, it's irrelevant, because his little glib suggestion to rename the movement is merely an attempt to shut down discussion about systemic racism in our country, in favor of everyone posturing about how they think murder is bad and rainbows are pretty. You don't need movements to back ideas that everyone already agrees with.

But more importantly, this shows that Paul's libertarian act is just smoke and mirrors. Black Lives Matter is an anti-violence movement. It's targeting a specific kind of violence, however: Police violence, which is fueled by unfair and untrue social narratives that paint black Americans as inherently dangerous people. Considering that it's a movement focused on preventing violence, if it shifted its mission somewhat to encompass all forms of violence (not saying it should, but if they took his suggestion and became an All Lives Matter movement), the most likely form that new movement would take would be....an anti-gun movement.

That's how you know that conservatives are just concern trolling BLM activists with this "all lives matter" or "black on black violence" stuff. First of all, it's facetious to imply that BLM activists don't already agree that intra-citizen violence is a problem. But we all pick our battles, and that's not their focus right now. More to the point, we already know how one way to effectively fight intra-citizen violence: Gun control. Gun control on a national scale, preferably enforced by the federal government, if I'm being honest, because even when one state or city cracks down, gun dealers flood it with weapons just purchased across state borders. I suspect that most BLM activists, if they shifted gears to work against violence generally, would focus on gun control.

Contrast that with what BLM is actually about: Protesting state-sponsored violence and bad policing that disproportionately affects black people. Shouldn't that be a cause that a so-called libertarian would back to the utmost? Would that be a cause that a supposed libertarian is so indifferent about that he gets off the train the second he sees a couple of activists make a choice that he thinks could have been played better?** Isn't protesting state overreach supposed to be libertarian's thing?

So there you have it: Rand Paul, in his eagerness to pander to the GOP base and its well-known resentments against  people of color fighting oppression, basically suggested that a movement shift focus from fighting state overreach to fighting for gun control.

He's not a libertarian. To be fair, almost no one who says they are is. They're just conservatives who confuse talking too much with being intelligent.

*Ending the war on drugs would be a good thing, don't get me wrong. He's right about this, but considering his dim view of nearly every other issue of important to anti-racism activists, his correct opinion on this matter isn't enough to redeem him, I'd say.

**To be clear, I think interrupting Bernie Sanders was clearly effective. But most liberals I know who disagree still nonetheless fully support BLM and its aims.