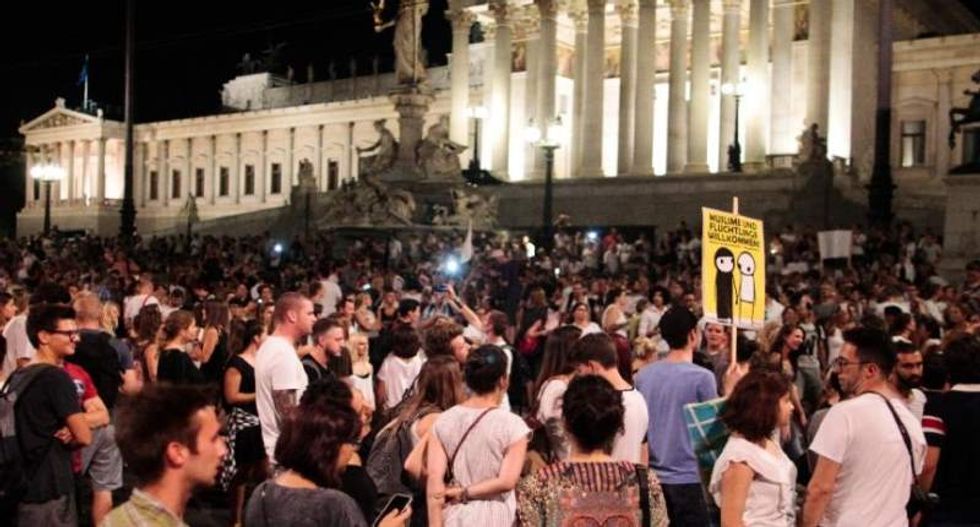 Protesters gather to demonstrate against ill-treatment of migrants after the bodies of 71 refugees were found in an abandoned truck last week, in Vienna on Aug. 31, 2015. Photo by Patrick Domingo for Agence France-Presse.

Around 20,000 people took to the streets of Vienna on Monday to demonstrate against ill-treatment of migrants, police said, after the bodies of 71 refugees were found in an abandoned truck last week.

Holding up large banners reading "Refugees welcome" and "I don't want Europe to be a mass grave", demonstrators of all ages rallied at the city's Westbahnhof train station before heading down a major shopping thoroughfare.

A large part of the inner city had been cordoned off for the march.

As they slowly wound their way through the capital, the protesters sang Austrian pop songs about love and solidarity, to spontaneous applause from bystanders.

Among those marching were parents carrying children on their shoulders, while police officers watched from the sidelines with their helmets under their arms.

The demonstrators, many dressed in white, congregated in front of parliament, where they lit a sea of candles.

"See how many we are -- we too can move things," she said in an emotional speech.

Authorities praised the calm nature of the demonstration after it had finished at 1930 GMT.

"There was not a single incident," police spokesman Patrick Maierhofer said.

The march took place as a service was held for the dead at St. Stephen's Cathedral.

"We've had enough -- enough of the deaths, the suffering and the persecution," the archbishop of Vienna, Cardinal Christoph Schoenborn, told the congregation, which included senior government members.

He said it was "too awful" to think of the plight of the migrants in the truck, four of whom were children.

The grim discovery was made in a refrigerated truck found off a motorway near the Hungarian border.

Trains carrying hundreds of migrants arrived at Westbahnhof from Budapest on Tuesday after they had been stopped at the Austrian border for several hours.

After pulling into the station, many migrants boarded a train to the Austrian city of Salzburg, while others climbed on to another one headed for Munich in southern Germany, with police looking on, an AFP correspondent at the scene said.