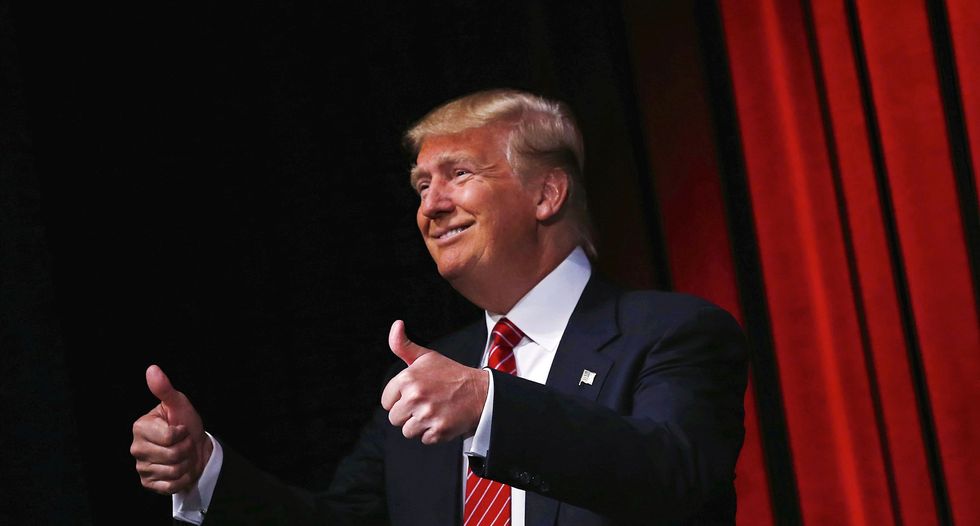 Nine presidential candidates showed up in Atlanta, Georgia, to address diehard conservative activists at the RedState Gathering – but all the talk was of the tenth who wasn’t there.

The big topic was Donald Trump, the controversial Republican frontrunner who was disinvited after implying that Fox News anchor Megyn Kelly asked him tough questions because she had her period .

Trump had been scheduled as keynote speaker at the event’s grand finale, a “tailgate” at the College Football Hall of Fame in downtown Atlanta. Without him, attendees gathered on an indoor artificial turf field to eat Chik-Fil-A, drink from a cash bar and listen to an address from the secretary of state of Georgia. No one really seemed to mind and, according to RedState, only one person asked for a refund upon hearing Trump wasn’t coming.

The weekend mirrored an astonishing fall from grace for Trump. At a debate party on Thursday night the real estate mogul was lustily cheered almost every time he opened his mouth. Yet within 48 hours attendees had soured on Trump after his tasteless comments about Kelly.

Pat Moore of Boerne, Texas, who on Thursday night told the Guardian that he was a Trump fan, had changed his tune two days later. On Saturday he said that even if Trump misspoke “he should have apologized” for his remarks, and he’d had enough of a candidate who “just keeps imploding”. Overall, though, his vote had always been with Ted Cruz.

Even those who still showed up on Saturday night in Trump shirts had had enough. Colby Delaney of Kennesaw, Georgia, who bought a ticket to the event just to see the former Celebrity Apprentice host, had soured on Trump. While still wearing a T-shirt with a screenshot of Trump from reality television, and bearing the phrase “haters gonna hate”, he wasn’t sure he could support him any more. “He just needs to tone it down,” said Delaney.

Trump dominated the conversation with the other nine candidates. At every press availability they were pressed about the latest controversy. It got to the point where former Arkansas governor Mike Huckabee exasperatedly told reporters on Saturday: “I’m running for president. I’m not running for social media critic of someone else.”

The candidates who are not Donald Trump did in the end manage to make an impression on voters. It seemed nearly impossible for Texas senator Ted Cruz to speak at the event without being interrupted by a standing ovation. He even ended up clapping along with them.

Afterwards, Cruz went out of his way to avoid the complicated subject of Donald Trump. When inevitably asked he steered his answer into a four-minute long condemnation of the Obama administration’s Iran policy.

After a disappointing debate appearance on Thursday the former Florida governor Jeb Bush gave an impassioned speech and won over a skeptical crowd when he had been booed only two days earlier. The political scion, who is perceived as a comparative moderate in the GOP field, touted his conservative record.

A surprising favorite at the event was the former Hewlett Packard CEO Carly Fiorina, who had followed up a strong performance at the second-tier debate on Thursday by impressing the crowd with sharp attacks on Hillary Clinton on Friday. She appeared on stage with all the confidence with a winner, telling attendees: “I think we kind of rumbled last night, what do you think?”

Erick Erickson, the organizer of the event, said on Saturday that Fiorina drew more questions from the crowd than any speaker. Afterwards one attendee, Andrew Carlton of Atlanta, told the Guardian: “If she’s not at the next top-tier debate there’s a big problem.”

In the meantime, with Trump still dividing the conservative movement, a bigger problem may be whether the real estate mogul is at the next debate. Trump has expressed utter confidence in his campaign and will be appearing on four different talk shows on Sunday morning to tout his message.

And for all the policies put forward by other candidates and all the organizing they do, it’s clear that for now nothing else matters once Donald Trump opens his mouth. He may not always keep the support of conservatives but Trump will always have their attention – and that of the press.