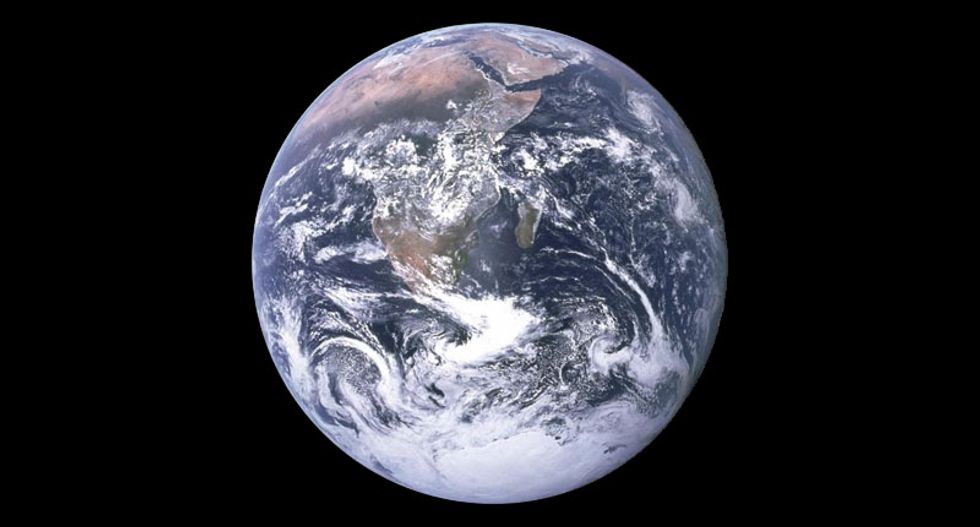 A view of planet Earth from space (AFP Photo/)

The idea of a deep-frozen world, “snowball Earth”, has captured the imagination since first proposed in the 1990s. On several occasions in history, long before animals evolved, apparently synchronous ice sheets existed on all the continents. However, much like falling into a crevasse on a glacier, it’s easy enough to enter such an ice age, but very difficult to escape.

The snowball Earth theory came from climate modellers who found that low carbon dioxide levels could trigger the growth of ice sheets. The whole planet would become glaciated and its mean temperature drop to as low as -45°C. As ice is much more reflective than the sea, or bare land, the Earth at that point would have been bouncing nearly all of the sun’s radiation back into space. So how could the planet ever emerge from such an ice age?

Volcanoes had to be the answer. Only they could emit enough carbon dioxide into the atmosphere to overcome the effects of Earth’s cool reflective surface. But climate models still found it difficult to plausibly describe how the Earth could have shed its glaciers.

We now have the first full explanation for how the best-known snowball event, the Marinoan, finished 635 million years ago with a several hundred metre rise in sea level. The study is the result of work by an international team of scientists, including myself. Our results are published in the journal Nature Geoscience.

We found slight wobbles of the Earth’s spin axis caused differences in the heat received at different places on the planet’s surface. These changes were small, but enough over thousands of years to cause a change in the places where snow accumulated or melted, leading the glaciers to advance and retreat.

The Earth was left looking just like the McMurdo Dry Valleys in Antarctica – arid, with lots of bare ground, but also containing glaciers up to 3km thick. Such an Earth would have been darker than previously envisaged, absorbing more of the sun’s radiation; it was easier to see how the escape from the snowball happened.

Today, to find exposed rocks that can tell us about the carbon dioxide content of the atmosphere in the Marinoan, you have to go to the Norwegian Arctic island of Svalbard. In 2009 snowball theory was vindicated after we found the telltale signal of high carbon dioxide levels in Svalbard limestone that formed during the ice age.

Immediately underneath the Marinoan deposits are some beds of rocks deposited at very regular intervals – so regular that they must have formed over thousands of years, influenced by wobbles in the Earth’s orbit. Since Svalbard was near the Equator at the time, the most likely type of wobble is caused by the Earth slowly shifting (“precessing”) its axis on cycles of approximately 20,000 years.

Researchers also found evidence of the same process in the Snowball deposits themselves. Fluctuations in ice in relation to the Earth’s orbit are a feature of our modern ice ages over the past million years, but had not been found in such an old glaciation.For a long time the Earth was too cold for glaciers to erode and deposit sediment – the main snowball period. The sediments then show several advances and retreats of the ice. When the glaciers retreated, they left behind a patchwork of environments: shallow and deep lakes, river channels, and floodplains that appeared as arid as anything known in Earth’s history.

Carbon dioxide appears to have remained at the same high level throughout the deposition of these sediments. Since it takes millions of years for CO2 to build up in the atmosphere, this implies the sediment layers must have formed quickly – on the order of 100,000 years. All this fits with the idea of 20,000 year precession cycles.

A group of climate modellers from Paris tested the theory. The rocks and the models agreed: wobbles in the Earth’s axis had caused the planet to escape its snowball phase.

So after several million years of being frozen, this icy Earth with a hot atmosphere rich in carbon dioxide had reached a Goldilocks zone – too warm to stay completely frozen, too cold to lose its ice. This transitional period lasted around 100,000 years before the glaciers fully melted and present-day Svalbard was flooded by the sea.

By Ian Fairchild, University of Birmingham

Ian Fairchild is Professor of Geosystems at University of Birmingham