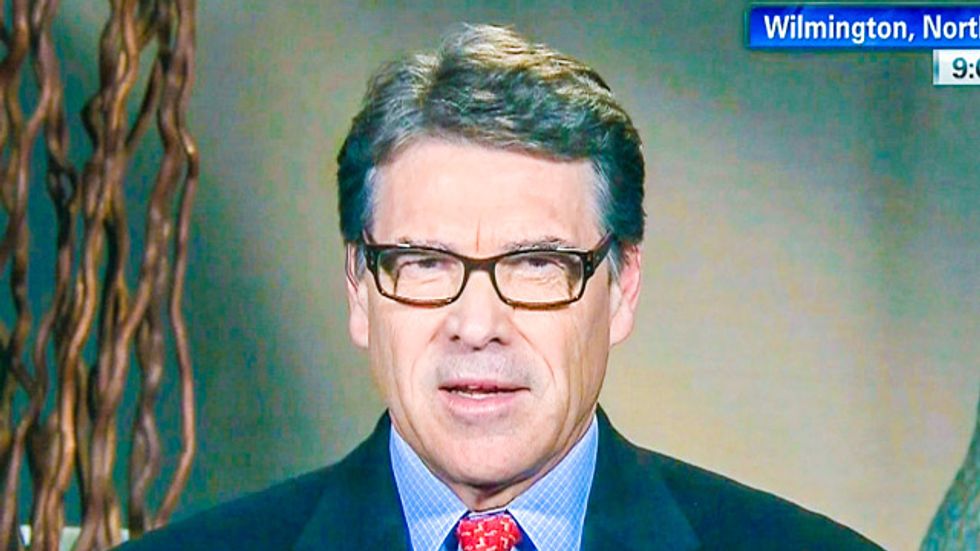 Former Texas Gov. Rick Perry compared himself to Jesus over the weekend during a "We Stand With God" rally in South Carolina -- but the Republican presidential candidate is really nothing like the biblical Christ.

Jesus promised his followers eternal life, while Perry asked supporters whether they were "willing to die" in the battle against the "political corruption" of "the left." "Will you join me in that effort? Will you load up? Are you ready to sacrifice?" Perry asked Saturday. "What are you willing to die for? Are you willing to rise up and stand for God and to go forward and live for the principles and the values that this country were based upon? Are you ready? Onward Christian soldiers!"

Jesus said the "kingdom of heaven" belongs to children, but Perry agreed with the Texas legislature's GOP majority that slashing education funding by $5.4 billion was a "thoughtful reduction." Most of those reductions were endured by teachers like Jesus, who were laid off by the thousands.

Jesus urged his followers to create new disciples by baptizing them in the Holy Trinity -- the father, the son and the Holy Spirit. Rick Perry infamously was unable to remember during a 2012 presidential debate which three federal agencies he would shutter.

Rick Perry signed nearly 300 execution orders as Texas governor, including the death penalty of a father convicted in the arson deaths of his children after prosecutors hid evidence of his innocence, and vetoed a ban on executing mentally disabled inmates. Let's just say that Jesus wouldn't have done that.

Perry and the GOP legislature turned down billions in federal dollars that would have expanded Medicaid health coverage to 1.5 million poor Texans, but Jesus scolded those who have "the world's goods, and sees his brother in need and closes his heart against him."

Jesus had a lot to say about killing and lying being wrong, so he might have been angered by Perry claiming the shootings of nine black worshipers at a South Carolina church by a white supremacist were simply an accident -- and not all that bad compared the killing of 12 people earlier this year at the French magazine Charlie Hebdo.

Jesus urged his followers to treat workers fairly and ethically, but lax enforcement of existing safety laws were blamed for a "preventable" explosion that killed 14 workers at a Texas fertilizer plant. "Texas is the land of freedom from over-regulation," the former governor boasts on his campaign website. Perry also has reportedly stopped paying his campaign staffers.

Jesus and Rick Perry are alike in at least one way. Neither of them looks all that much smarter wearing glasses.

Obama and Trump: Who laughed last?

As legendary quarterback Tom Brady celebrated the Tampa Bay Buccaneers' 2021 Super Bowl victory with President Joe Biden, Brady cracked some jokes at the expense of a guy widely perceived his friend — at least until now. Along with ridiculing one of Donald Trump's disparaging nicknames for Biden, Brady also mocked Trump's claims that he didn't really lose the 2020 election by quipping, "Not a lot of people think that we could have won. In fact, I think about 40% of the people still don't think we won."

As the Delta variant of COVID-19 continues to spread rapidly in states across America, Republican lawmakers appear to be changing their tunes about the coronavirus vaccine.

According to Politico, there is a growing divide among Republican lawmakers now expressing concern about the resurgence of the virus, versus those who sow doubt about the push for more Americans to be vaccinated.