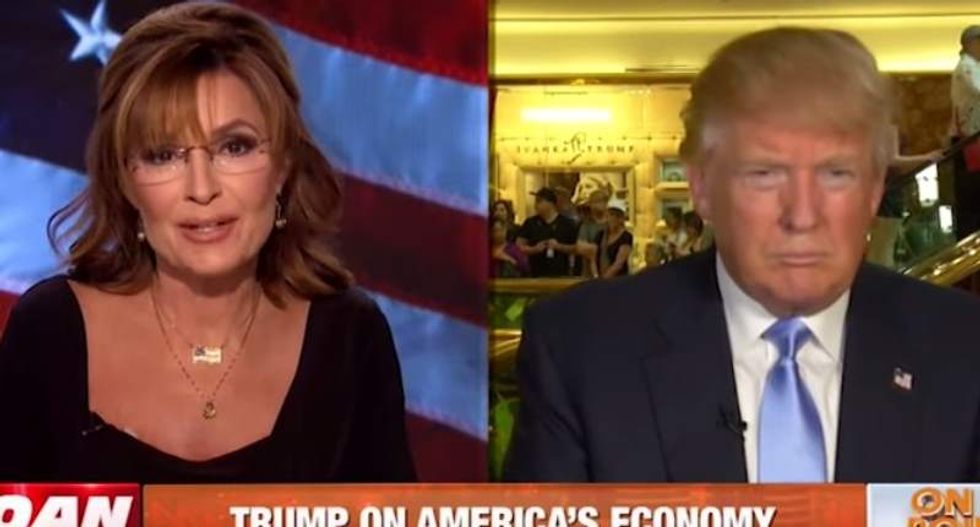 Former Alaska Gov. Sarah Palin and Donald Trump shared gripes on Friday over what Palin has characterized as an unfair question -- which verse from the Bible Trump likes the most.

"I listened to that going, 'Do they ask Hillary that? What does it have to do with running for the office of the presidency? Is it anybody's business?'" Palin told Trump during an interview on Friday. "These personal 'gotcha' questions, really trying to get you us, anybody running for office off game. How are you finding that, and finding a technique to put them in their place so that the American public isn't wasting their time and actually get to hear what's important via candidates' message?"

"You saw that. I love the Bible, and I'm Protestant, I'm Presbyterian. And they were hitting me with different questions, one right after the other," he replied. "I don't know if it's 'gotcha questions,' it probably is. And then they said, 'What's your favorite verse?' You know, that's a very personal thing. I don't like giving that out to people that you hardly know. Frankly, I don't know if they're fair questions, or not fair questions, but there are certain things that you, myself and a lot of other people like to personal."

Neither of them mentioned that the "gotcha" moment happened in connection to Trump's repeated declaration that the Bible is his favorite book of all time. CNN reported on Friday that Marble Collegiate Church, where Trump said he attends services, does not consider him to be an active member.

Palin also failed to mention a CNN report from earlier this year stating that Clinton, a self-identified Methodist, willingly recited Corinthians 13 during a meeting with a pastor in Columbia, South Carolina.

However, the former vice-presidential nominee did pick up the conservative media trend of trying to discredit Fusion anchor Jorge Ramos by calling him a "political activist" following their encounter earlier this week in Dubuque, Iowa.

"You schooled that radical activist," she said. "And it was the right thing to do, 'cause I don't think he's gonna pull that again. Where'd you get your guts for that kind of necessary confrontation?"

"The press was very good to me on that one," Trump said. "He was totally out of line. He was screaming and ranting and raving. And I actually said, 'Who is this guy?' Then I actually figured it out."

While conservative outlets have applauded Trump, the National Association of Hispanic Journalists condemned him for kicking him out of a press conference before having a combative exchange regarding Trump's plan to deport all of the country's 11 million undocumented immigrants.