School board member tells female colleague: All you know is 'laying on your back' with legs in the air 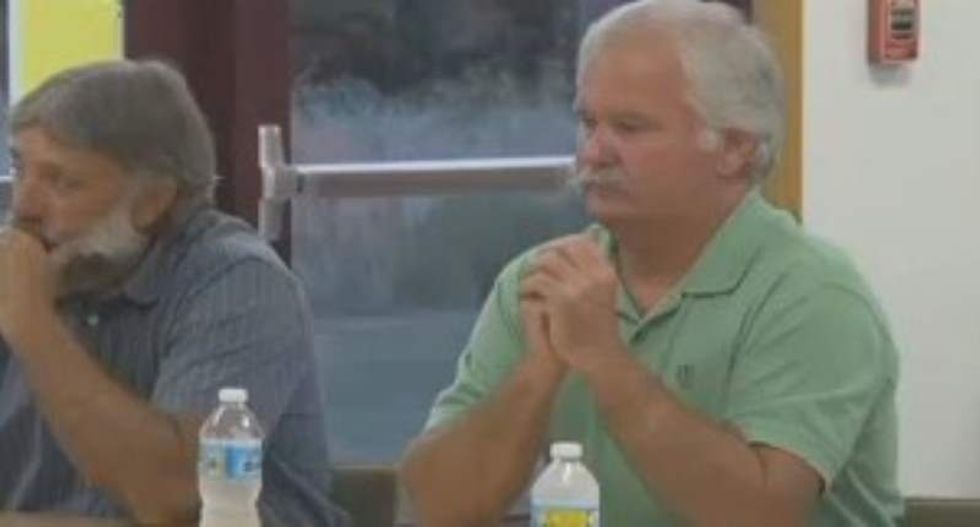 School board members in Perryville, Missouri censured one of its members and voted to ask for his resignation after he made a sexist remark toward a female colleague, KFVS-TV reported.

The board voted 4-3 to ask Mark Gremaud (pictured above, right) to quit for telling fellow board member Kathy Carron, "Kathy, you are just a woman, the only thing you know is laying on your back with your legs in the air splayed" during a closed session. The group does not have the power to expel a member on its own.

According to the Cape Girardeau Southeast Missourian, board president Nancy Voelker read the remark during a public meeting on Tuesday, on the advice of the group's legal counsel.

Gremaud, who has denied making that "exact" statement and addressing Carron by name, was silent during the meeting except for asking to speak to his attorney.

One of the board members who voted against asking Gremaud to resign, Jeff Weilbrecht, objected to the issue being aired out in public, saying Gremaud had already apologized in private and said that the remark "was not sexual in nature."

"I'm not saying Mark Gremaud is the perfect board member. I'm not saying I'm one either," he said during the meeting. "I do ask that the rest of us stop and put our petty differences aside once and act like adults and accept that we have differences."

However, Voelker said in a statement released on Wednesday that the seriousness of the matter meant it could not be settled solely through an apology.

"I assure you that the comments for which Mr. Gremaud was censured were unprovoked. This is a fact uncontested by six members of the board," the statement read. "The discussion was not about teachers, students, farmers, or any other conjecture you may see on social media. We were discussing board procedures and board behaviors. Mrs. Carron's statement was not directed to Mr. Gremaud, but was rather directed to the entire board. Mrs. Carron made a reasonable comment in a reasonable manner, before Mr. Gremaud's unprovoked verbal attack."

Watch KFVS' report, as aired on Tuesday, below.