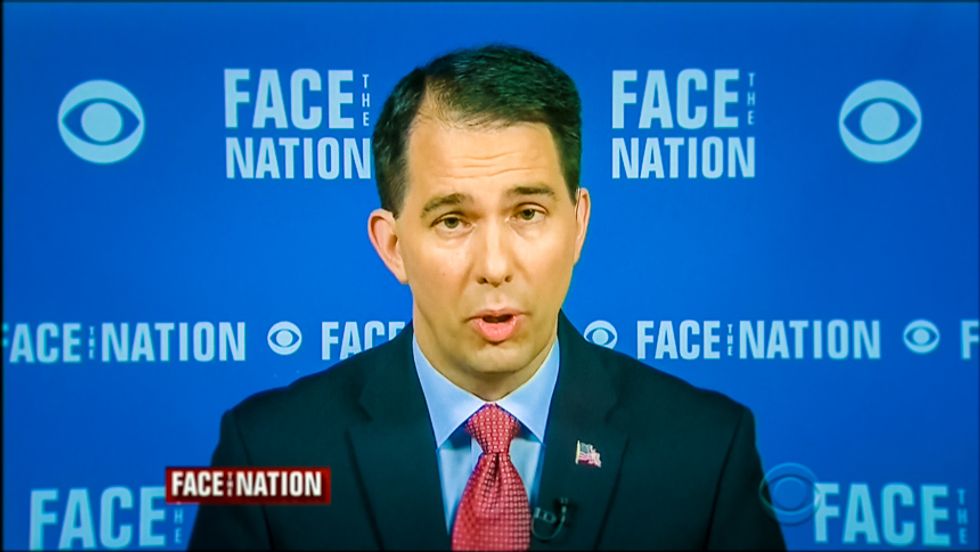 Today is a very good day for assessing how much the modern Republican Party is in the thrall of the John Birch Society/fluoride in the drinking water/black helicopter set. The answer appears to be, "Completely", mostly because Senate Republicans are holding a vote to defund Planned Parenthood based on a bizarre and completely unfounded conspiracy theory about the organization selling "baby parts".

But we also have this gem that shows how bad things have gotten:

“I don’t know,” the Republican presidential candidate said Saturday during an appearance before 450 donors to the political network backed by conservative billionaires Charles and David Koch. “I presume he is,” Walker continued when asked if he has had time to check since he set off a firestorm in February when he couldn’t answer if the President is Christian.

Since he's running for president, he immediately started hedging, hoping he doesn't come across as a complete lunatic.

“You’re not going to get a different answer than I said before,” Walker said toward the end of a Q&A session moderated by Politico’s Mike Allen. Walker said he’s never asked Obama about his faith. “As someone who is a believer myself, I don’t presume to know someone’s beliefs about whether they follow Christ or not unless I’ve actually talked with him.”

But don't be fooled by him trying to hide behind some bizarre technicality-style argument. I doubt very much Walker would hesitate to affirm the religious beliefs of a fellow white Christian. This is him pandering to the people who believe President Obama is a "secret" Muslim. The fact that he hedges doesn't change that. After all, most right wing conspiracy theorists are paranoid and believe that the "truth" is being suppressed by an all-powerful "liberal media". So they're going to see this hedging and think, "Poor man, he's trying to tell the truth, but the all-powerful liberal media would crucify him, so he has to be careful." His intended audience of mouth-breathing right wingers are hearing their belief that the president is not just a secret Muslim but a secret anti-American jihadist loud and clear.

I don't know what can be done about the increasing capitulation to the far right in the Republican Party. On one hand, part of me welcomes it. They've always been a bunch of paranoid nuts, and this feels like a big coming out party. Maybe next time I point out that global warming "skepticism" is a conspiracy theory, I won't have as many people argue that is overstating the case.

On the other hand, it's not unreasonable to be worried about one of the two major American political parties being completely controlled by Alex Jones-level nutters who believe in black markets for baby parts and secret Muslim conspiracies to take over the White House. I worry about it a lot myself. There's a huge amount of damage being done every day because of this. Our country has real problems---environmental problems, massive economic problems---and that is all being completely ignored while half of D.C. chases shadows.

Yes, I get that Republicans don't want to fix global warming or income inequality and so screaming about Planned Parenthood is a way to distract people and rile up the wackaloon base so they can hold onto power. But that just shows why this is such a problem. People who want power but have no interest in responsible governance have no business having that power. They only have it by playing along with the Alex Jones crowd. This is a real fiddling-while-Rome-burns situation here, and there doesn't seem to be a solution in the near future.