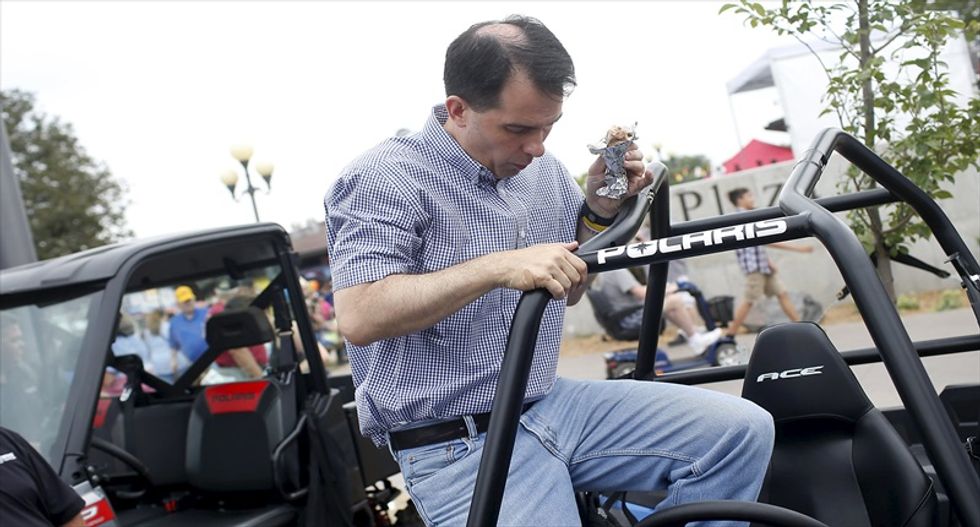 Republican presidential candidate and Governor of Wisconsin Scott Walker climbs out of an ATV vehicle at the Iowa State Fair in Des Moines, Iowa on Aug. 17, 2015. Photo by Joshua Lott for Reuters.

Sinking in the polls here, Scott Walker started on Monday to sound very much like the man he is now chasing in the Republican presidential race, Donald Trump.

Speaking to a rowdy crowd at the Iowa State Fair, Walker took a decidedly more anti-establishment and aggressive tone than he has employed so far on the campaign trail, talking about taking power from Washington and playing up the need to build a fence along the southwest U.S. border, a much-discussed Trump priority.

Aping Trump further, Walker took credit for the immigration debate roiling the Republican Party, saying that it stemmed from his opposition to President Obama’s executive actions that gave some immigrants relief from deportation.

As the governor of neighboring Wisconsin, Walker was once widely considered the front-runner in Iowa, a critical early voting state where he was leading in some polls as late as last month. But Trump’s surge has knocked the wind out of his campaign. A recent CNN poll had him in single digits in Iowa, with Trump holding a double-digit advantage.

Walker’s largely indistinctive performance at the first Republican debate in Cleveland this month only heightened the perception among many in the party that his campaign is losing steam and that he is being eclipsed not only by Trump, but by another Midwestern governor, John Kasich of Ohio, who has also seen his poll numbers rise.

Iowa was once projected to be Walker’s strategic linchpin — the jumping off point from which he would wage a national campaign. But all anyone was talking about Monday morning as Walker arrived here was Trump’s audacious visit to the fair on Saturday, when he first circled the fairgrounds in his helicopter.

Trump has also shown that he is serious about building a credible operation in the state, hiring operatives skilled at building support at the grassroots level. Political observers say it is likely that few rivals have been harmed more by Trump’s surging candidacy than Walker.

“If Trump has done anything to Walker, it’s take away all the attention he once enjoyed in Iowa,” Craig Robinson, former political director of the Iowa Republican Party, told Reuters.

Even so, as of Monday Walker still would not go as far as Trump on some issues. A fairgoer, Jenny Turner, asked whether Walker would pledge, as Trump did Sunday, to deport millions of immigrants who entered the U.S. illegally. Walker demurred, talking up the need to “secure the border” and “enforce the law.”

That left Turner, 35, a resident of Burlington, Iowa, disappointed. “He wouldn’t do the plain-speak,” she said afterward. “That’s what we’re looking for, the plain talk.”

But she said she still viewed Walker’s appearance favorably. “I think Walker is playing up the populist line because Trump is hitting it,” she said.

Walker’s remarks were frequently disrupted by protesters who had traveled from Wisconsin to heckle the governor, who made curtailing the power of public-sector unions the centerpiece of his tenure in the state. They shouted, “You failed your state!” and “Down with Walker!”

The rancor only seemed to energize Walker, who boasted of staring down the thousands of protesters who packed the state capitol in Wisconsin in 2011 in protest of his anti-union push.

“There are a lot of people who talk tough, I’m the only one who stood up to 100,000 protesters,” he shouted over the catcalls. “I am not intimidated!”

Anthony DeFino, 18, of Ankeny, Iowa, said he thought the exchange boosted Walker in the eyes of conservatives in the crowd. “I think today helped him,” DeFino said.

“To see a governor stand up and succeed is empowering,” added Joe Carroll, 20, of Davenport, Iowa.

Walker, who said he will release a blueprint for his healthcare reform proposal Tuesday, told the crowd he will be ramping up his efforts in Iowa. The caucuses are in January, five months away. “We’re going to keep coming back,” he said.

Robinson said Walker’s failure to capitalize on his early success here has been a bigger problem for him than was Trump’s surge.

"Now team Walker is ready to go, and a lot of the excitement is gone,” Robinson said. “You have to harvest support whenever the crop is ready. For Walker, that was a couple of months ago.”