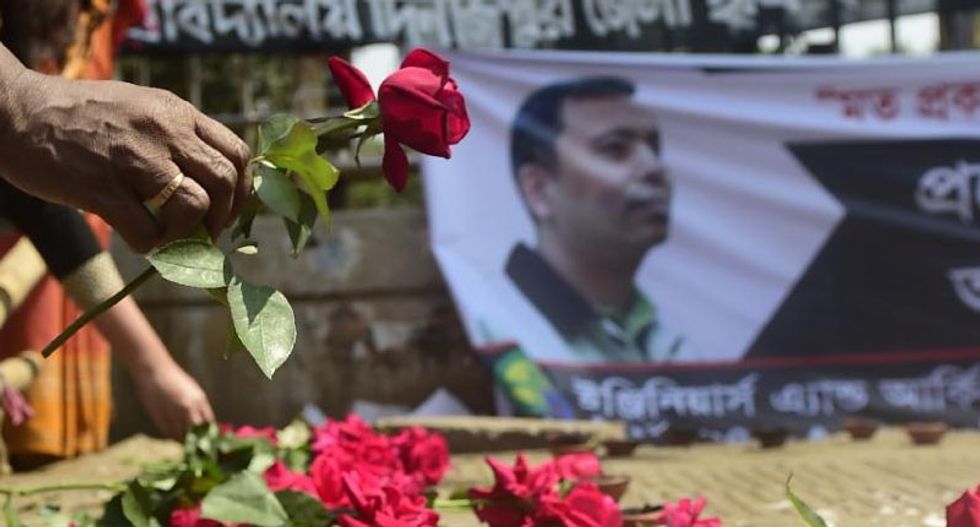 A Bangladeshi activist pays his respects to slain blogger Avijit Roy, who was killed on February 26 (AFP Photo/Munir Uz Zaman)

A gang armed with machetes hacked a secular blogger to death at his home in Dhaka on Friday in the fourth such murder in Bangladesh since the start of the year, an activist group and police said.

Niloy Chakrabarti, who used the pen-name Niloy Neel, was killed after the gang broke into his apartment, according to the Bangladesh Blogger and Activist Network, which was alerted to the attack by a witness.

"They entered his room in the fifth floor and shoved his friend aside and then hacked him to death. He was a listed target of the Islamist militants," the network's head, Imran H. Sarker, told AFP.

Police confirmed Chakrabarti had been murdered by a group of half a dozen people in the capital's Goran neighbourhood, although they had no details on his background or the motive for the killing.

"There were six people who knocked his door, saying that they were looking to rent a flat," Muntashirul Islam, a deputy police commissioner, told AFP.

"Two of them then took him to a room and then slaughtered him there," Islam added.

"His wife was in the flat but she was confined to another room."

Asif Mohiuddin, another secular blogger who himself survived an attack by militants in Bangladesh in 2013, described Chakrabarti as an atheist "free thinker" whose posts appeared on several sites.

"He was critical against religions and wrote against Islamist, Hindu and Buddhist fundamentalism. He was a founding member of a rationalist organisation," Mohiuddin, who is now based in Berlin, told AFP by phone.

In his latest blog, which was posted on August 3, Chakrabarti asked why mosques were being air-conditioned.

He is the fourth secular blogger to be killed in the Muslim-majority nation since February, when Bangladeshi-born US citizen Avijit Roy was hacked to death in Dhaka. His wife was also badly injured in the attack.

The other victims include Ananta Bijoy, Das who was attacked by a group wielding machetes on May 13 as he headed to work in Sylhet, and 27-year-old Washiqur Rahman who was hacked to death in Dhaka in March.

Most secular bloggers have either gone into hiding, often using pseudonyms in their posts, or have fled abroad.

Activist groups say they fear that Islamist hit squads have hitlists which contain the full names and addresses of the bloggers.

Bangladeshi authorities banned the hardline Islamist group Ansarullah Bangla Team (ABT) following Das's murder in May, after facing accusations that they were doing too little to stop such attacks.

In a recent petition addressed to Prime Minister Sheikh Hasina, authors including Salman Rushdie and Margaret Atwood called on her government "to do all in their power to ensure that the tragic events of the last three months are not repeated, and to bring the perpetrators to justice".

"We are gravely concerned by this escalating pattern of violence against writers and journalists who are peacefully expressing their views," said the petition.

Bangladesh is an officially secular country, but more than 90 percent of its 160 million people are Muslim.