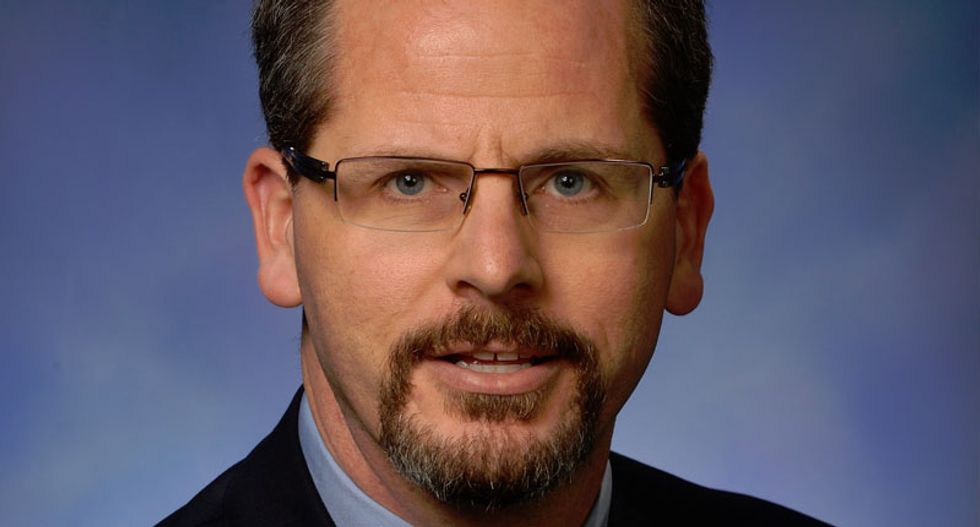 The Michigan Tea Party Republican who was caught on tape plotting to create an anonymous email accusing himself of having a gay fling in order to deflect from an affair with a fellow married Republican says he won't step down, the Detroit Free Press is reporting.

State Rep. Todd Courser (R) was caught on tape attempting to get an aide to assist him in creating an anonymous email smearing himself with a rumor of a hook-up with a gay prostitute behind a nightclub prior to word getting out that he was having an affair with fellow Tea Partier Rep. Cindy Gamrat (R).

While state lawmakers have opened up an investigation into the two, Courser --who is a father of four -- released a rambling audio on his campaign website admitting "My actions in and around the events in the e-mail sent to misdirect attention were my doing in planning and execution," before pointing the finger at anonymous blackmailers and lawmakers.

"The e-mail was put in motion to disrupt the blackmailer and give me some clues as to the surveillance of my life. It was all done in a pressure cooker and … it put me in a situation where a bad choice was the choice that I made," he said, stating the unnamed blackmailers were trying to get him to resign.

"But to change the country, men and women must be able to stand unafraid even when they're a broken messenger. And I'm a certainly a broken messenger," he said in the recording. "I have chosen to stay and make them play their hand. I think it is absolutely necessary to have these clandestine operations to control public officials be exposed. So I have refused to leave quietly and have decided that these efforts really need to come out."

He added, "I see this as the establishment machine getting everyone to do what they're told to do and no one dare question their authority."

Fellow Republican and Speaker of the House Kevin Cotter said Courser's latest shenanigans were unsurprising and expected given his past behavior.

"So much of the audio file was just another in a long series of deflections. He’s trying to deflect from himself and allege that others have done wrong," he said. "He has a long pattern of this type of behavior."

He added, "If this weren’t so offensive, it might be funny. He sends out these ridiculously long e-mail rants, about the so-called establishment, and uses words like 'mafia' and 'cartel' but no one else did wrong here. These two representatives voluntarily engaged in the affair and they need to own up to that. There are 107 other members of the House currently serving. It’s so unfair to this institution as a whole and it’s so unfair that we have this type of distraction."

Cotter said lawmakers won't be making any moves on the two lawmakers until the investigation is complete.

Rep. Gamrat, a mother of three, has refused to comment on the ongoing controversy.