St. Louis cops use tear gas against protesters after killing another black suspect 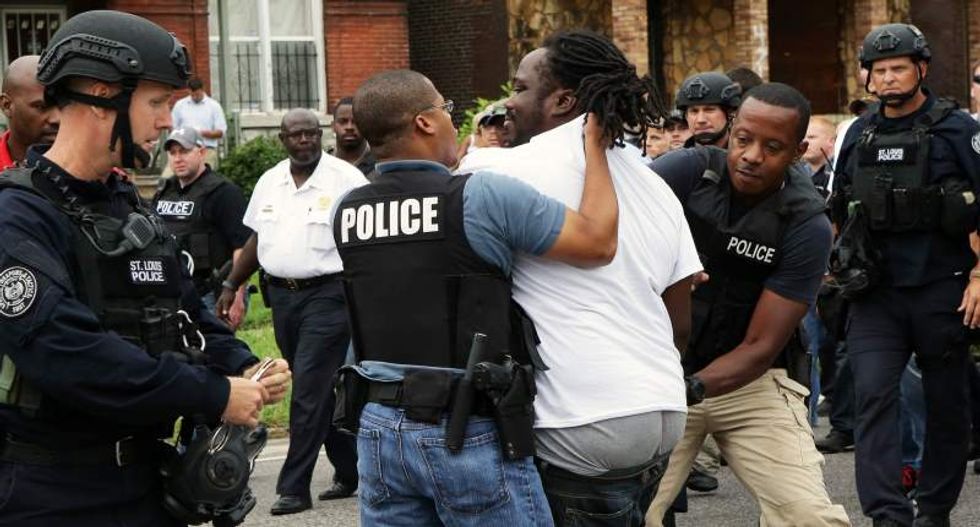 Police arrest a protester that was in the middle of the street after a shooting incident in St. Louis, Missouri on Aug. 19, 2015. Photo by Lawrence Bryant for Reuters.

Police arrested nine people during a clash with protesters on Wednesday, following the fatal shooting of an 18-year-old suspect as officers executed a search warrant earlier in the day, the St. Louis Post-Dispatch reported.

Police Chief Sam Dotson said his officers used tear gas and smoke canisters to disperse the crowd from a busy thoroughfare after demonstrators ignored their order to leave the area and threw rocks and bottles at them. Footage aired by KMOV-TV shows someone throwing a tear gas canister back toward officers after it landed near him.

At least one vacant house and one car were set on fire during the course of the day, as well as pieces of furniture set on a street.

Another video, " target="_blank">posted online from the scene of the protest, shows demonstrators criticizing the heavy police presence, including a moment when officers are seen accosting an older man:

According to the Post-Dispatch, the crowd had initially gathered downtown to mark the one-year anniversary of the death of 25-year-old Kajieme Powell, who was shot and killed by police less than a minute after officers responded to a report that he stole donuts and an energy drink from a local convenience store.

Police identified the suspect killed in Wednesday's shooting as Mansur Ball-Bey, saying he and another unidentified suspect ran out of a house in the city's north side as officers were executing a search warrant. The officers fired at Ball-Bey after he allegedly pointed a gun at them. The alleged weapon was described as a stolen handgun.

The other suspect was able to escape the scene and is still at large. Authorities confiscated crack cocaine and four guns from the house.

Watch KMOV's report, as aired on Wednesday, below.