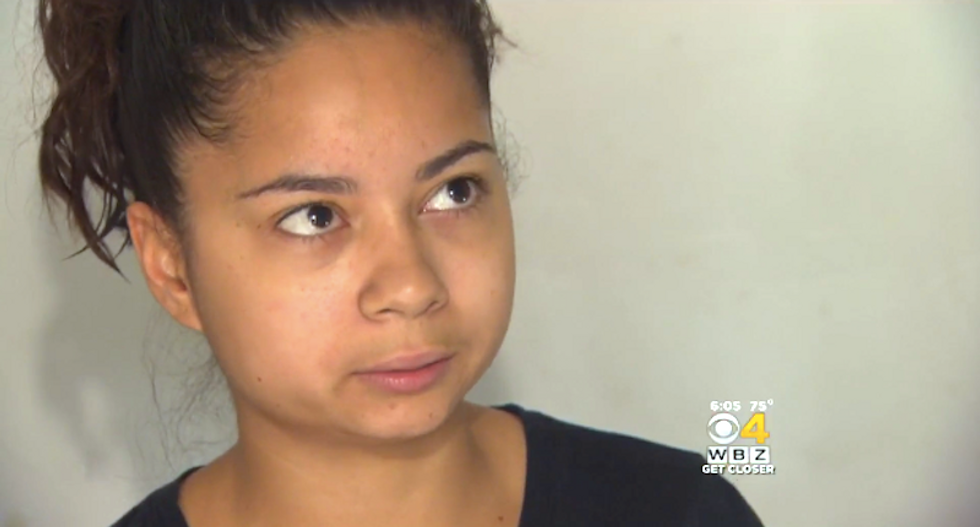 Police terrorized a naked woman and her children at gunpoint last week during a no-knock raid on the wrong apartment.

Marianne Diaz said she was awakened about 5:30 a.m. Wednesday by SWAT officers knocking down the door to her Worcester, Massachusetts, apartment as officers wearing helmets and shields burst inside and pointed "big guns" at her head, reported the Telegram & Gazette.

Diaz said her 7-year-old daughter was shaking in terror as she held her 18-month-old daughter in her lap, and she said officers would not allow her to cover up for about 10 minutes -- after a woman officer frisked her nude body.

ALSO SEE: 60 years ago today, Emmett Till whistled at a white woman — and he was executed for it four days later

“It was terrorizing, and the worst thing I’ve ever been through in my life," Diaz told WBZ-TV. "They were loud, vulgar and disgusting in behavior."

Police were looking for a man who had previously lived in the apartment, where the 23-year-old Diaz has lived since May with her children, her 23-year-old fiancé and a 27-year-old mutual friend.

Prosecutors said Friday that police acted on the "best information" they had before obtaining a search warrant from a Central District Court judge, but court documents show the man police were looking for had been arrested nearly two weeks earlier and listed another address as his home.

The affidavit shows no indication that state Trooper Nicholas Nason had firsthand knowledge the man still lived at Diaz's apartment or that any surveillance had been conducted on the residence.

The Registry of Motor Vehicles shows two people claim the apartment as their residence -- Diaz, who has no criminal record and pays the utility bills under her own name, and another man with a lengthy criminal record.

Police listed no evidence of a relationship between Diaz and that man, who authorities considered armed and dangerous.

“I’m really upset about that,” Diaz said. “If they knew I lived there and had no criminal record, and the electricity was under my name, then why (do this) and use excessive force?”

Officers burst through the front and back doors of the third-floor apartment, throwing Diaz's fiancé Bryant Alequin and their roommate Joshua Matos to the ground.

“I screamed and tried to explain my wrist was messed up,” said Matos, whose fractured wrist was re-broken during the raid. “They told me to shut the f*ck up.”

After officers failed to turn up any drugs, weapons or the target of their warrant, Diaz said they started murmuring to one another.

"Oh sh*t, the snake got away," one officer said, according to Diaz.

Diaz has asked the city and police department to investigate why the raid was permitted in the first place, but prosecutors have already said it "was executed in the manner it was for the safety of all involved."

The young mother said she still couldn't believe what had happened.

“Before they left, one (officer) said, 'We treated you with respect,’” Diaz said. “They didn’t even apologize.”