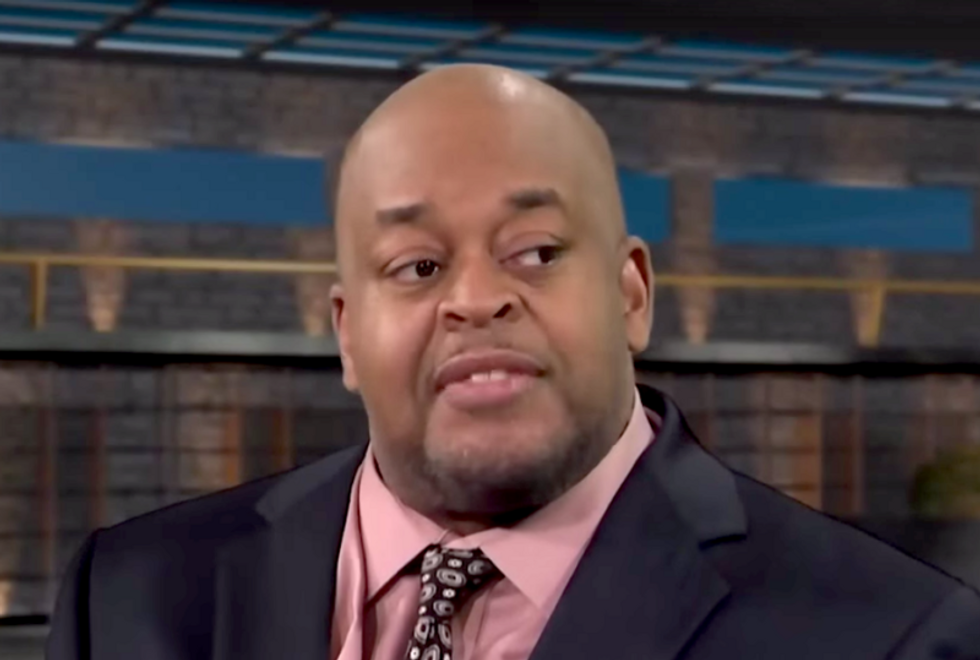 On the Newsmax.com video series The Hard Line with Ed Berliner, Tea Party leader Niger Innis went off on a conspiracy-heavy rant connecting the #BlackLivesMatter movement to the far-right's perennial bogeyman George Soros.

Berliner asked Innis -- the executive director of the website TeaParty.net -- if anything has really changed on the ground in Ferguson, Missouri at the year anniversary of the slaying of unarmed teen Michael Brown by Officer Darren Wilson.

Innis started off reasonably enough, saying that with an increased presence of African-Americans on the police force and in city leadership, things are improving in Ferguson.

"Plus, I think the whole idea of police as tax collectors with guns is dead," he said, referring to city officials' policy of using fines against the city's poorest citizens as a major source of civic revenue, meaning that police have no incentive to reduce crime.

"Then you have to look at the other perspective where you've got these George Soros-funded anarchists like the #BlackLivesMatter campaign and other such anarchists and socialists," he said.

"Why do we never hear that they're funded by Soros?" asked Berliner. "You're one of the only people who will say that out loud."

"Because they've been intimidated," Innis said. The Democratic Party, he went on, needs to replace its donkey mascot with MSNBC's Al Sharpton. "They have become the party of Al Sharpton."

He went on to call the activist movement a "cancer" on the nation because "in the United States, blacks and whites? We've never been better off."

Innis went on to say that the discrimination that BLM and its adherents see in the U.S. is "the difference between perception and reality."

The difference between BLM and radical groups like Outside Agitators 206, Innis said, is virtually nonexistent.

"There's two kinds of anarchists," he said. "Some anarchists want to create chaos and confusion within the law. Others do not, but they're all a part of the same package. And they do not represent the interests of the community of Ferguson or black communities generally."

"What we need is a president that it does not care about political correctness," Innis said, "that is not intimidated by little thugs like the #BlackLivesMatter campaign that has intimidated O'Malley and Bernie Sanders and Hillary Clinton. He's got to be willing to stand up to the American people and say 'These are the facts of life.'"