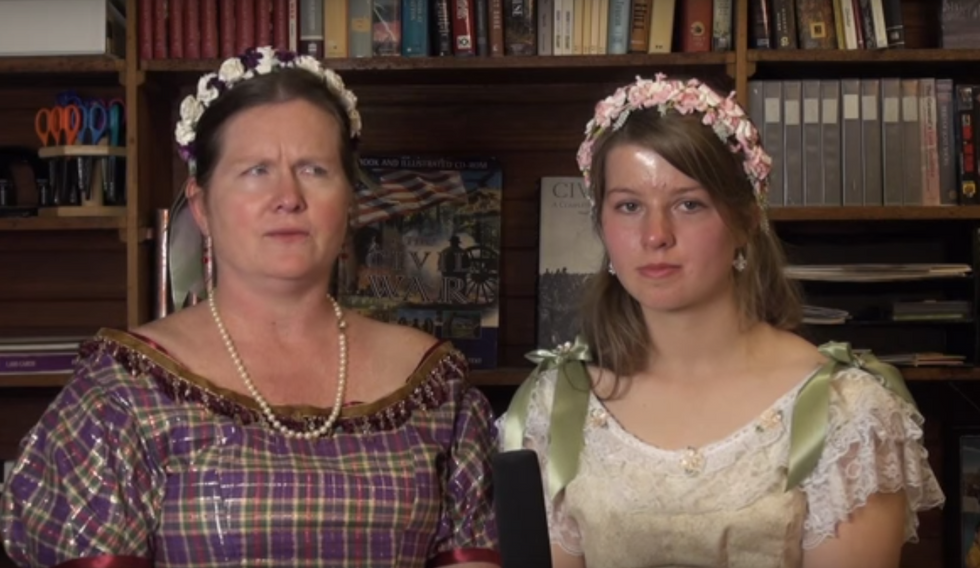 A chain of youth camps claims that it teaches teens about southern history, but one of its leaders reportedly has ties to the Ku Klux Klan.

According to Vocativ, Sam Davis Youth Camps are dotted throughout the southern states and each summer they welcome teens from across the region. At camp, the teens are taught to have reverence and respect for the antebellum era and the Confederacy, which unsuccessfully attempted to break away from the rest of the United States, sparking the U.S. Civil War.

“Our kids aren’t getting taught this stuff in the schools,” said organizer Phil Walters. “Great American heroes like Jefferson Davis and General Robert Lee…our kids are not gonna be told that these people are evil, hate-mongering slave-holders and not have us do something to correct it.”

The families that send their children to Sam Davis Camp for a week each summer are concerned that their heritage and traditions are dying out. The camps are an attempt to instill these values in younger generations.

“Probably one of the largest...problem[s] that all of these heritage organizations...[have] is the age of the membership,” said Johnnie Holley of the Sons of Confederate Veterans (SCV), one of the groups that sponsors the camps. “In the schools today, the war is not taught properly, our children are dying for information about their ancestry and their heritage. If we don’t bring our young people into our organizations, then the organizations will eventually die.”

Kids at the camp take archery, swimming, crafts and other regular camp activities, but they also take courses in the SCV's revisionist history of the Civil War, which they call "The War of Southern Independence."

In their retelling, the Civil War had nothing to do with slavery. Abraham Lincoln was a racist, they say, and the only reason people believe that Confederate boosters are racist is because of the NAACP, which has declared “war on everything Confederate.”

“When you get down to it, this is a small group of people -- the NAACP -- who say that everything in the South is evil and that it needs to be erased,” said Holley.

The Southern Poverty Law Center (SPLC) has categorized the SCV as a hate group. The SCV's long-range strategist and a key actor is the Sam Davis Youth Camp program is Kirk Lyons, an attorney and founder of the Southern Legal Resource Center. Lyons has a history of defending white supremacists and Klan members in court.

Lyons said it has been years since he worked on a case of that kind and said that if you have any questions about his purported racism, you can ask his black friend.

“They don’t tell you that my best friend of 17 years is H.K. Edgerton,” Lyons said.

Edgerton -- an African-American SCV member and former NAACP chapter president-- currently sits on the board of the Southern Legal Resource Center.

“How many white supremacists do you know who have a black best friend?” Lyons asked.

Voactiv said, "According to the SPLC, Lyons is a former member of the National Alliance, a neo-Nazi organization founded by William Pierce, the author of the Turner Diaries, a fictional blueprint for starting a race war and something of a bible for hate groups since it was published in 1978. Pages of Pierce’s novel were found in the getaway car driven by Oklahoma City bomber Timothy McVeigh in 1995."