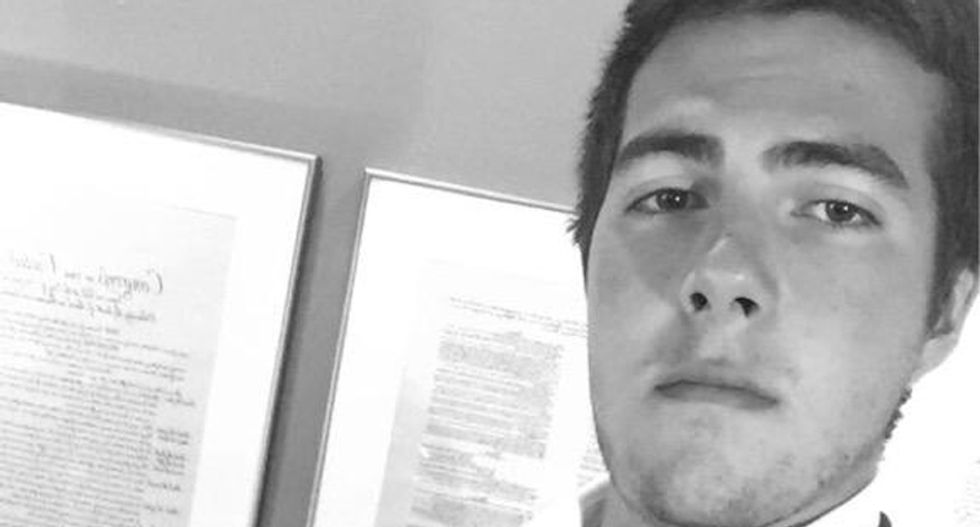 A Texas Christian University student suspended for tweets calling Baltimore protesters "druggy hoodrats" and referring to Hispanics as "beaners" claims the university is trying to make him out to be a "classic bigoted hateful white male," reports Todd Starnes at Fox News.

Harry Vincent, who tweets under the name "@ClassyPatriot" was suspended by the university for a series of tweets the university called “inappropriate.”

Speaking with Fox News, the 19-year-old Vincent complained that the school is railroading him, saying, “They’re trying to make me out to be the classic bigoted hateful white male. That’s the complete opposite of what I am.”

Vincent received a letter  from the school accusing him of violating the university’s code of student conduct causing “infliction of bodily or emotional harm” and “disorderly conduct.”

A former middle school classmate of Vincent's wrote on Tumblr, “This a**hole has been posting racist and disgusting comments on Twitter/Facebook. When I confronted him about it, he referred to me as an ‘Islamic s**thead,” before urging others to contact the school about his bigoted tweets.

Among his online comments, he wrote: "These hoodrat criminals in Baltimore need  to be shipped off and exiled to the sahara desert. Maybe then they'll realize how much we provide for them, (welfare, college tuition, obama phone's, medicare, etc.)"

Responding to someone who complained about his comments, he responded: "When I said you would be reincarnated as a beaner I was being generous"

Planning a school getaway, he noted: "Almost as tan as a terrorist. Going to be thoroughly disappointed if I'm not racially profiled on my trip to the gulf shores"

According to the Dallas Morning News, Vincent was put on probation and banned from most campus activities causing the Baltimore resident to consider leaving school, saying he might just join the Marines leaving behind his buddies he calls the "Squad."