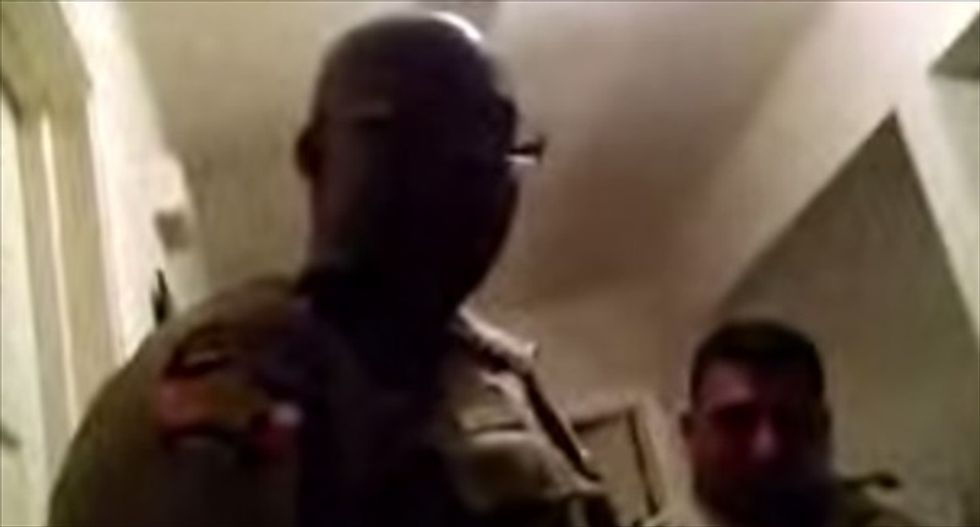 The local sheriff's department confirmed in a statement that it was investigating the Aug. 2 encounter between the deputies and Tori Thayer, but added, "Any further statement or publication of evidence in the case, on television or social media, before a thorough investigation is completed is inappropriate and interferes with the integrity of the investigation."

Thayer started recording the encounter with her phone after the deputies allegedly barged into her home around 3 a.m. that morning looking for her roommate, identified as Carly Christine. The deputies said they had been asked to perform a welfare check on Christine, who was reportedly suicidal. Thayer can be heard in the video asking, "Gentlemen, can you provide a warrant?" after telling them she did not know where Christine was.

"I have reason to believe," one of them says, before reaching for her phone. The picture goes black, but Thayer can be heard yelling, "Stop, you guys can't handle me like this."

Thayer said the video stopped when the deputy threw her on the ground by the arm, claiming another deputy "got behind me and put his knee into my back and thrust me to the ground while one stayed on my chest the entire time and handcuffed me."

Seconds later, the deputy can be heard telling her her, "You're not helping." Around two minutes in, one of them says they were told that Christine intended to kill herself.

"Why couldn't you just tell me?" Thayer asks. "Why did you have to come in here and f*cking abuse me?"

The video resumes after the deputies give Thayer her phone back. She tells them, "Nothing here. Please here. You don't have a warrant. Please."

None of the deputies follow her request or contest their lack of a warrant. Instead, one asks, "When was the last time you actually had communication, talked to --"

"Told you, three days, get out," she replies. "I haven't seen Carly. You do not have a warrant. Please exit my household."

The deputies eventually left the house, but Thayer filed a complaint against the department on Wednesday morning.

"I was dumbfounded," she told KTBC. "Honestly I'd never imagine something like this happening to me, I hear it on the news see on my newsfeed. But you never think about it happening to you."

Courts have upheld police's authority to enter a residence without a warrant when responding to a possible suicide call.

Watch KTBC's report, as aired on Wednesday, below.

Thayer's video, as posted online, can be seen here.