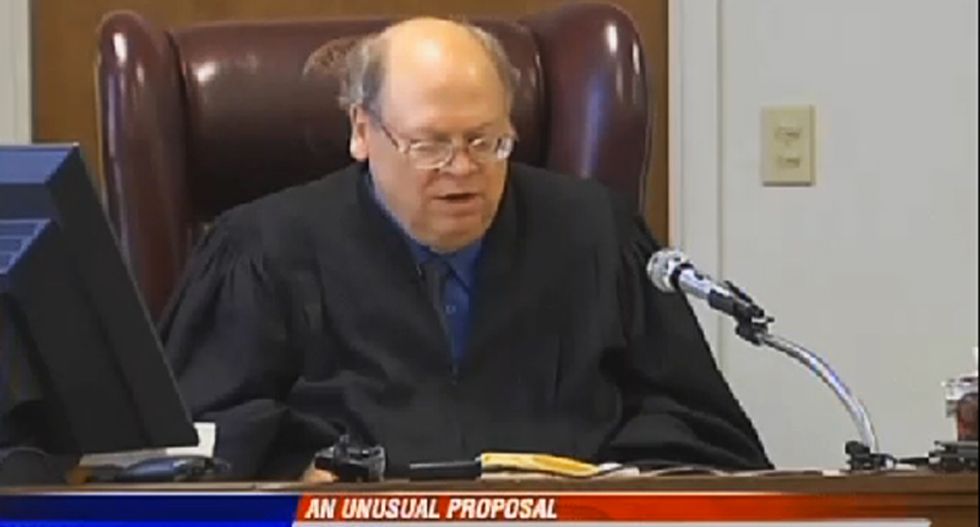 A Texas man facing jail time for getting into a fight with his girlfriend's old boyfriend was given two choices by an East Texas judge: go to jail or marry his girlfriend in  30 days, reports KLTV.

Josten Bundy stood before Smith County Judge Randall Rogers in mid-July on misdemeanor charges of assault after getting into a fight with the ex-boyfriend of his girlfriend at the time, Elizabeth Jaynes. According to Bundy, the judge gave him a choice: 15 days in jail or marry his girlfriend within thirty days as part of his probation.

Bundy said that he got into the fight because her ex was being "disrespectful" to her, telling the judge, “I took matters into my own hands and I know that’s wrong.I know I was raised better, but it happened.”

“Is she worth it?” Judge Rogers asked Bundy, according to court transcripts.

“I said, well to be honest, sir, I was raised with four sisters and if any man was talking to a woman like that,” Bundy stated, “I’d probably do the same thing.”

That was when Rogers laid down the terms of his release.

“You know, as a part of my probation, you’re going to have to marry her within 30 days.” the judge said, telling him the alternative was 15 days in jail.

“He offered me fifteen days in jail and that would have been fine and I asked if I could call my job [to let them know],” said Bundy. “The judge told me ‘nope, that’s not how this works.’”

According to Jaynes, who was in the courtroom at the time, the judge then embarrassed her by making her stand up.

“My face was so red, people behind me were laughing,” said Jaynes. “[The judge] made me stand up in court.”

“It just felt like we weren't going to be able to have the wedding we wanted,” she explained. “It was just going to be kind of pieced together, I didn't even have a white dress.”

The couple got a marriage license and were married by a justice of the peace, but Bundy was unhappy because the impromptu wedding meant many in is his family couldn't attend, and Jaynes father criticized the judge for forcing the wedding on the young couple.

“[I felt] anger; I was mad. [The judge] can’t do this by court ordering somebody to be married,” said Kenneth Jaynes. “I contacted a couple of lawyers but they told me someone was trying to pull my leg…that judges don't court order somebody to get married.”

According to a local attorney, Rogers' ruling was illegal.

"To say you're not going to be criminally punished if you get married is way out of left field,” said attorney Blake Bailey. “It sounds like the old days of shotgun weddings, but not even the judge is capable of enforcing, what he thinks is best for some people in his court.”

Judge Rogers has refused to speak about the case or to defend some of his sentencing practices which included also demanding that Bundy write out Bible verses as part of his probation.

Watch the video below from KLTV: