The 'Fight for $15': It's not just about raising wages at McDonald's, it's about a living wage for everyone 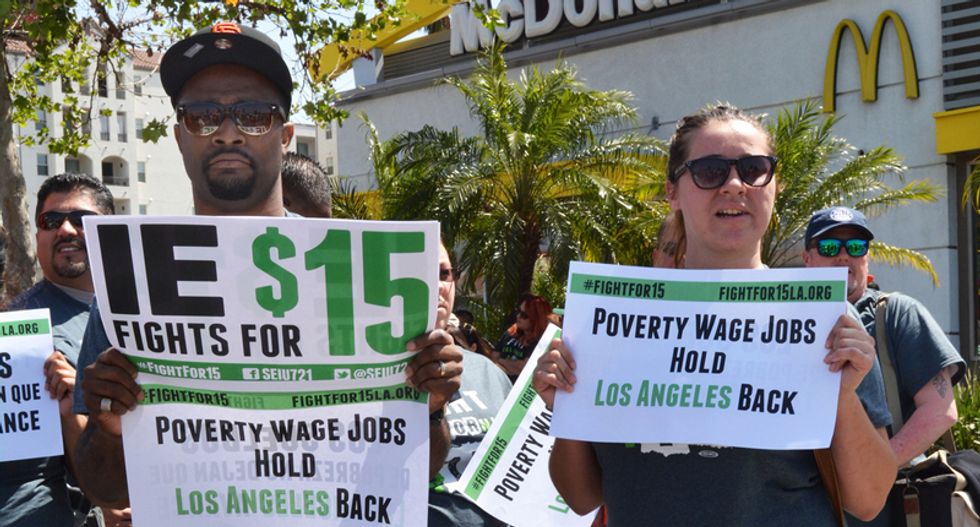 The Fight for $15 is giving McDonald’s a stark choice – either sit down and work together with us to find a way to lift up hundreds of thousands of low-wage McDonald’s workers or face continued economic war.

That warning is not without heft. Already, as a result of the Fight for $15’s prodding, Brazilian prosecutors are investigating alleged wage theft, child labor and unsafe conditions at McDonald’s franchised operations, while the European Union is investigating it for more than $1bn in alleged tax evasion.

In New York, a panel appointed by Governor Andrew Cuomo ruled that the state’s 180,000 fast-food workers should be paid a minimum of $15 an hour, in response to protests and pressure for Fight for $15.

Scott Courtney, the Fight for $15’s chief strategist, is helping to steer the movement through the Service Employees International Union, the union that has spent tens of millions of dollars underwriting the campaign. But Courtney has bigger ideas to expand on the notion of unionization.

“I would call what happened [in New York] collective bargaining, and I would call that a union,” Courtney said, even though there was no “bargaining” with employers.

“If we had a vehicle or mechanism where people could join the organization and fund those fights, I think many people would happily join,” he added.

Courtney rejected recommendations by some labor experts that the Fight for $15 seek to unionize 100 or 200 company-owned restaurants, and then pressure McDonald’s to sign a contract that pays $15 an hour or close to it – and then use that as a model.

“That’s too small an approach,” said Courtney, who also serves as the organizing director for the SEIU. “Our making a deal to organize 100 restaurants, that’s not going to happen. This is about lifting up the 64 million American workers who make less than $15 an hour, who aren’t making enough to live on.”

The SEIU, he said, would continue spending whatever it takes to sustain the movement. He emphasized that without a strong union behind the movement, it would never have grown as large, loud and successful.

“The only way this continues to be fought is if people have an organization that allows them into the process, and it has to have sustainable funding for that to happen,” Courtney said. “The Koch brothers can easily say what they want and get listened to, but if they didn’t have that $900m to contribute to political campaigns, no one would pay attention to them.”

Courtney envisions a giant, nationwide organization of low-wage workers that would be financially sustainable and would continuously pressure companies and lawmakers on wages and working conditions.

“This doesn’t necessary have to be like the union my grandfather helped build at his factory in the 1930s,” he said.

McDonald’s has refused to sit down with the SEIU or Fight for $15. Heidi Barker Sa Shekhem, a McDonald’s spokeswoman, said the SEIU has spent over $80m in members’ dues money “attacking the McDonald’s brand and the independent franchisees who own 90% of McDonald’s restaurants, in an unsuccessful attempt to unionize workers”.

Barker Sa Shekhem said the Fight for $15’s “dwindling US campaign and decreased media attention” have prompted it to launch global attacks against the company. “The admitted purpose of these union attacks is to force McDonald’s and its franchisees to deal with the SEIU, and to bypass the right of the employees of McDonald’s” to vote in unionization elections,” she said. “The SEIU does not represent a single worker in a McDonald’s restaurant, so there is no reason for McDonald’s to meet with the union.”

Courtney warned that unless McDonald’s agrees to hold talks with the movement’s leaders, the company would face more protests across the US and increased efforts to get governments around the world to take action against it. Internationally, he said, if they don’t come to the table the movement will push for more government actions – for instance, on allegations of McDonald’s using anticompetitive practices to squeeze franchisees.

“Our campaign is designed to help them get to the table and help them make the right choice so we can do the right thing for workers,” said Courtney. “We’re not trying to put McDonald’s out of business.”

Courtney noted that McDonald’s new CEO, Steve Easterbrook, has vowed to transform McDonald’s into a “modern, progressive burger company”, and Courtney said his movement would like to help him do that. “I believe this is a smart group of people; they are not ideological,” Courtney said. “The rational thing is to sit down and have a conversation on how to make this a truly good, progressive company. We think it’s in their long-term business interest to do that. Meanwhile, we’re going to shine a light on some things they do, and some of those things don’t smell or look very good.”

Courtney made clear that in any talks with McDonald’s, he’d press it to lift wages for the 750,000 workers at its 1,500 company-owned restaurants and 12,500 franchised restaurants in the US. But he declined to spell out what else the campaign would push McDonald’s to do, including the possibility of unionizing those workers in the traditional sense. He made clear, however, that the Fight for $15 was intent on building a larger, workers organization to push on wages, health coverage, pensions, scheduling and sick days.

Last Thursday’s decision by the National Labor Relations Board, which made it easier to declare franchising companies like McDonald’s joint employers with their franchisees, might not be as big a boost to the Fight for $15 as it might have, because the movement was already focusing its pressures and protests at the parent company – treating it in effect as a joint employer.

Courtney is not shy about discussing the Fight for $15’s accomplishments. “It’s the first really workers movement that has captured the country’s imagination in my lifetime,” he said, noting that when President Barack Obama was re-elected in 2012, Obama and most congressional Democrats were not yet close to endorsing a $10.10 federal minimum wage. “This campaign has dramatically changed the conversation about wages. It’s created a different conversation about what it takes people to live on. Fifteen dollars has become a new rallying cry.”

He noted that New York state, Los Angeles, San Francisco and Seattle have approved a $15 minimum wage, and Chicago and Kansas City $13, while numerous other states and cities have also raised their minimums. (And on Friday, the Democratic National Committee officially adopted a nationwide $15 minimum wage as part of its platform.)

Courtney said several ingredients were key to these successes. “This campaign really made the case that workers willing to stand up and strike and backed up by an organization and resources can make an enormous difference in working people’s lives,” he said. “This movement has helped 11 or 12 million people get raises since the end of 2012.”

Courtney’s parting message to McDonald’s: “We would like you to take a different approach where you’re a modern, progressive company, where you become the hero to this generation by helping lift people out of poverty. You help people have enough money in their pockets to be able to afford Big Macs and fries rather than just the Dollar Menu.”

After being battered by withering criticism of its management of the power grid during last month's winter storm, the Electric Reliability Council of Texas saw several of its board members resign and fired its CEO. The chair of the Public Utility Commission, which oversees the grid operator, was forced to resign.

The political fallout from the long-lasting Texas power outages have hit both entities hard after Gov. Greg Abbott blamed ERCOT's leadership for the near-collapse of the electric grid and made its reform a legislative priority, and state lawmakers hammered the PUC for what they called a failure of oversight.

The three official fundraising arms of the Republican Party are reportedly ignoring a threat from former President Donald Trump to stop using his name and likeness in fundraising appeals as they build up a war chest for the 2022 midterm election.

A man who refused to wear a face mask filmed himself making life miserable for workers at Home Depot as they told him that he could not buy anything unless he masked up.

At the start of the video, the man is seen berating a Home Depot worker who informed him that the store would refuse him service if he refused to wear a mask while inside.