'This is nuts': Rachel Maddow accuses Fox of breaking its own entry rules for GOP debate 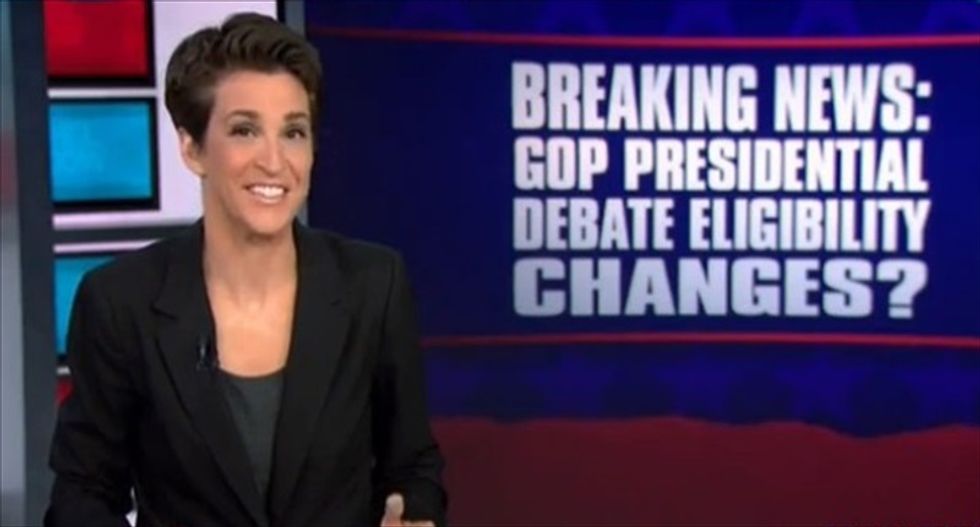 MSNBC host Rachel Maddow accused Fox News on Tuesday of violating their own rules regarding the polls used to determine which 10 Republican presidential candidates would be allowed into its debate event on Thursday.

"This is nuts," she said. "I can't believe they did this. I mean, I get that Fox News only wants to have 10 candidates on the stage. They know, and everybody knows, that arbitrarily setting this 10-candidate cutoff when you've got 17 people running is gonna have politically-fatal consequences for if not all, at least most of the candidates who don't make that top 10."

Maddow explained that Fox originally said it would use the five most recent polls to determine which candidates would make it into Thursday's debate. However, the network ended up ignoring an NBC/Wall Street Journal poll conducted between July 26 and 30 showing Texas Gov. Rick Perry and Ohio Gov. John Kasich within one percentage point of each other and instead used a Quinnipiac University poll gathered between July 23 and 28 showing Kasich ahead by three percentage points.

"That decision had the effect of making John Kasich look like he is way more clearly ahead of Rick Perry than he would look otherwise," she said.

Politico reported that Fox said it dismissed the NBC/WSJ poll "because it did not meet our criterion that the poll read the names of each Republican candidate in the vote question."

However, Maddow argued that the conservative network knew the consequences of its decision, especially regarding the distance between the 10th- and 11-th place finishers, saying they jettisoned the results that "would make it look too close."

"They violated their own previously-announced criteria of what polls they use," she said. "They moved the goal posts in the middle of the game in a way that makes it look like they were trying to justify the lineup of who they wanted on stage."