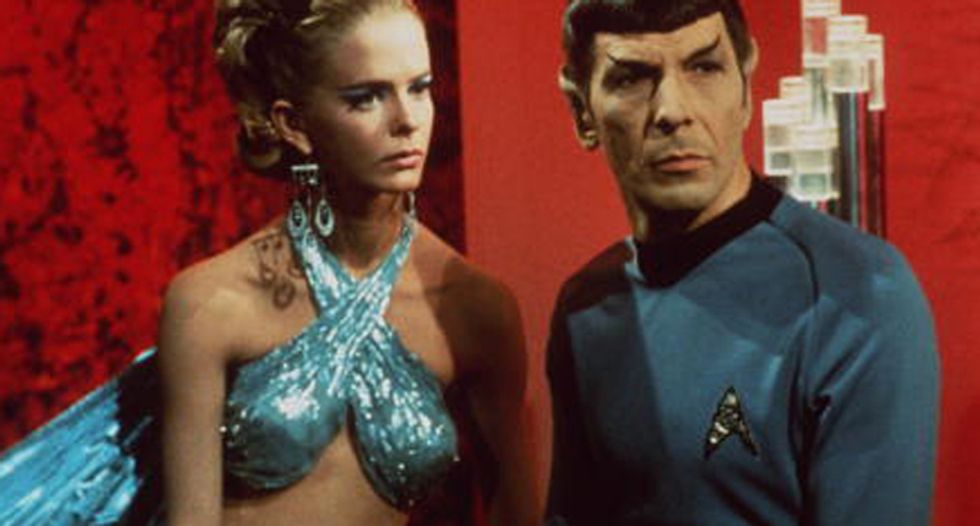 The television series Star Trek: The Original Series (1966–1969) debuted one year after my immediate family and I relocated from the Harlem district of New York City to an area of South Central Los Angeles in 1965.

This was also the year in which that latter metropolis erupted into riots that became known collectively as the Watts Rebellion. The television series became a form of escape from the surroundings of a depressing urban reality and envisioning a more tolerant future.

As it turned out, however, TV was not to be the key to that future. Rather, that entrée would be provided by many subsequent years of formal education that would spark in me an intellectual curiosity about the inner workings of the trek of life – engaging the tangibles of this world as well as the intangibles I imagined to exist beyond the stars.

It was through the arts and humanities that I attempted to grapple with the many intersecting questions I had about things that mattered most to me, such as race, gender and sexuality, as well as technology of the past, present and future.

Fast forward half a century – to where I help my students attempt to make sense of exactly those same relevant, complex questions.

After earning a doctoral degree in art history and teaching at the university level for 25 of those intervening years, I have observed a contradiction in the majority of students of this Generation Y: they seem connected and yet very distanced from the overwhelming complexities of the world around them.

The point of connection appears strongest in the area of popular culture. The disconnect, ironically, seems vested in a contemporary (sometimes blind) obsession with technology.

As a historian of art and visual culture by training, I wrestled with how popular culture and technology might be combined in a thought-provoking fashion with difficult and uncomfortable social and personal matters. How might these issues be made important to a student’s contemporary situation, to her or his daily experiences and encounters?

I found part of the answer by traveling back to the 1960s, when difficult social change movements around race (civil rights, black power), gender (the women’s movement) and sexuality (the gay and lesbian movement) were in full swing and paralleled the national obsession with technology, the space race and indulgence in popular culture as a way to both escape and liberate ourselves.

The result of my time travel was the creation of a new course for the 21st century entitled “Roaming the Star Trek Universe: Race, Gender, and Alien Sexualities.” The course explores the Star Trek universe of science fiction television as one way to probe critical issues of race, gender and alternate forms of sexuality. The response to the course offering was overwhelming.

But why would students be interested, and why teach such a course in today’s complex world?

Why does it matter?

Certainly, this is not the first nor last course to be taught on Star Trek. However, what makes it different, or at least unusual, is its open-ended interest in the intersecting dynamics of race, gender and varying forms of sexuality.

The stories and characters of Star Trek can teach students many things about today’s complex world.

As a persuasive tool in imagining the possibilities of the future, Star Trek has the power and pull to immerse the individual completely through stories and characters that give meaning and purpose to our collective sense of identity and existence.

For instance, in the original series episode, called “Let that be your last battlefield” (1969), the conflict between two bi-colored humanoids named Lokai and Bele leads to questions of racial and political friction, assigning racial designations and bringing out the tensions of identity politics.

As with real life, there are no pat solutions but many consequences.

The science fiction genre, as part of popular culture, provides a seductive means of examining the intersections of the concerns of race, gender and sexuality in exciting and daring new ways such as, for instance, using Klingons as metaphors for Muslims and Vulcans for Jews.

The linking of past, present and future through subjects such as slavery, racism, colonization, feminism, reproductive technologies, homosexuality/homophobia, spirituality and religious fundamentalism, just to name a few, stimulates critical reexamination of today’s very real problems.

One way to do this, for example, is to ask probing questions so to get students thinking about ways in which interspecies conflicts among humans, Vulcans, Romulans, Klingons, Andorians, Betazoids, Cardassians and Bajorans, to name a few, are portrayed and how they mirror or parallel disagreements between today’s nations, races, genders, religions and classes.

The idea of creating futuristic spaces, places and experiences that are modeled on past and contemporary situations poses questions about the possibility of achieving optimistic futures and the inevitability of being left with pessimistic ones.

Science fiction is about everything

Counter to stereotype, science fiction is not only about the future of technology and science, but encompasses what the writer and educator Thomas Lombardo calls “the future of everything” – the future of society, culture, ethics, the environment, the human mind, races, genders, sex and sexuality.

It is in respect to the complex narratives about thoughts on the future of everything from a variety of perspectives that the Star Trek universe presents a challenge and is overwhelming even when restricted to the intersecting matters of race, gender and sexuality.

Of these three concerns, race is perhaps the most difficult to figure out. There is a constant struggle over what race means, and, in most instances, its definition and significance remain unresolved.

There are a host of characters from the Star Trek universe that speak to the logic and illogic of race, signaling the importance and timeliness of racial matters today.

Characters in the television series who are readily identified by the color of their skin include Uhura, Worf, Geordie Laforge, Guinan, Captain Benjamin Sisko and Tuvok. All of them can teach us something about contrived racial (and gender) categories that also go beyond skin color.

However, in order to think more deeply about race, we also have to look at what the series says about the power of whiteness and its tendency to reinforce racial as well as gender stereotypes.

Captain Kirk of the original series, the Prime Directive, and the United Federation of Planets all come to mind here. Characters such as Mr Spock, B’Elanna Torres, Odo and even Commander Data reference the complexity of ethnicity and racial mixtures disguised as hybrid alien species struggling for identity and a sense of belonging in an extended humanoid and technological universe.

Relevance to our lives today

These issues and the struggles they impose are important because they continue to resonate with us today and have direct bearing on the quality of our lives.

The process of teaching and learning about race, gender and sexuality through science fiction stories and technology in television and film can be challenging and even daunting.

But Star Trek may well be one of the more significant ways (even boldly so) through which to not only teach and learn about the past, the present and the future, but to willfully shape the contours of the latter.

This article is part of a series on unique courses.

Tomorrow: A view through the brewing class

James Smalls is Professor of Art History at University of Maryland, Baltimore County.

Twitter on Thursday confirmed that it pulled the plug on several accounts trying to skirt its ban on former president Donald Trump by promoting his blog posts.

The ex-president launched a page on his website earlier this week promising comment "straight from the desk of Donald J Trump."

US calls on Hong Kong to release Tiananmen vigil activists

US Secretary of State Antony Blinken called for the release Friday of four Hong Kong democracy activists who were jailed for taking part in a vigil for victims of Beijing's 1989 Tiananmen Square crackdown.

"The United States stands with the people of Hong Kong and rejects the sentencing of activists for attending a Tiananmen commemoration," Blinken wrote on Twitter.

Some are waiting for their arrival with trepidation, others are curious what they might taste like: Americans are swapping tips on how best to weather the storm when billions of cicadas soon emerge after 17 years underground.

Before invading parks and people's gardens, the insects have already conquered the airwaves, social media and newspapers, especially in parts of the eastern, central and southern United States where "Brood X" is due to emerge.

Rental cars becoming scarce and expensive for US travelers