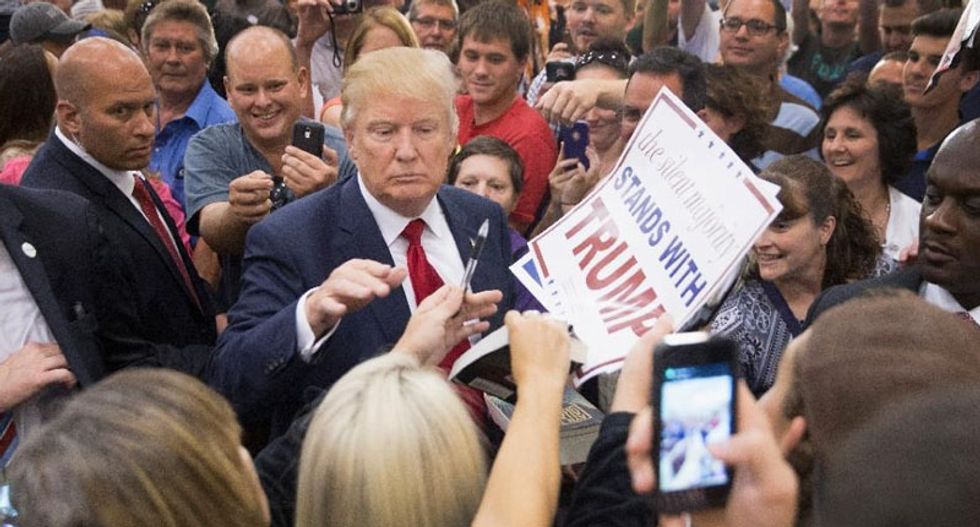 Trump, the combative real estate mogul, leads the 16 other Republican candidates with 28 percent support among registered voters nationwide, up from 20 percent in a similar July 30 survey by Quinnipiac University.

Thursday's lead marks the widest margin for any Republican so far in the election cycle, the survey said.

"Other GOP hopefuls seem to disappear. Trump proves you don't have to be loved to be the leader," said Quinnipiac poll assistant director Tim Malloy.

Trump's abrasive style, including his caustic criticism of rivals, has led some observers to say he does not have the temperament to be president, but he has dominated the race essentially since he declared his candidacy in June.

On the Democratic side, Clinton's support has shrunk, to 45 percent now compared with 55 percent on July 30, while her main rival Senator Bernie Sanders is polling at his highest level, 22 percent.

Biden, who is not a declared candidate but is mulling jumping into the race, earned 18 percent in the poll. Significantly, Biden "has the best appeal in general election matchups against top Republicans," Malloy said.

Clinton beats them too but by smaller numbers: four points, two points and one point respectively.

Despite Trump's Republican lead, he has the highest negative favorability numbers in the field, at 36 percent to 54 percent. Bush is underwater as well, at 32-41, while Clinton's negative 39-51 matches her worst favorability rating ever.

Trump and Clinton are also seen as the least honest and trustworthy of the field.

Trump also tops the "no way" list, with 26 percent of Republicans saying they definitely would not support him.

Clinton tops the "no way" list among Democrats, at 11 percent.

The August 20-25 poll has a margin of error of plus or minus 2.5 percentage points.