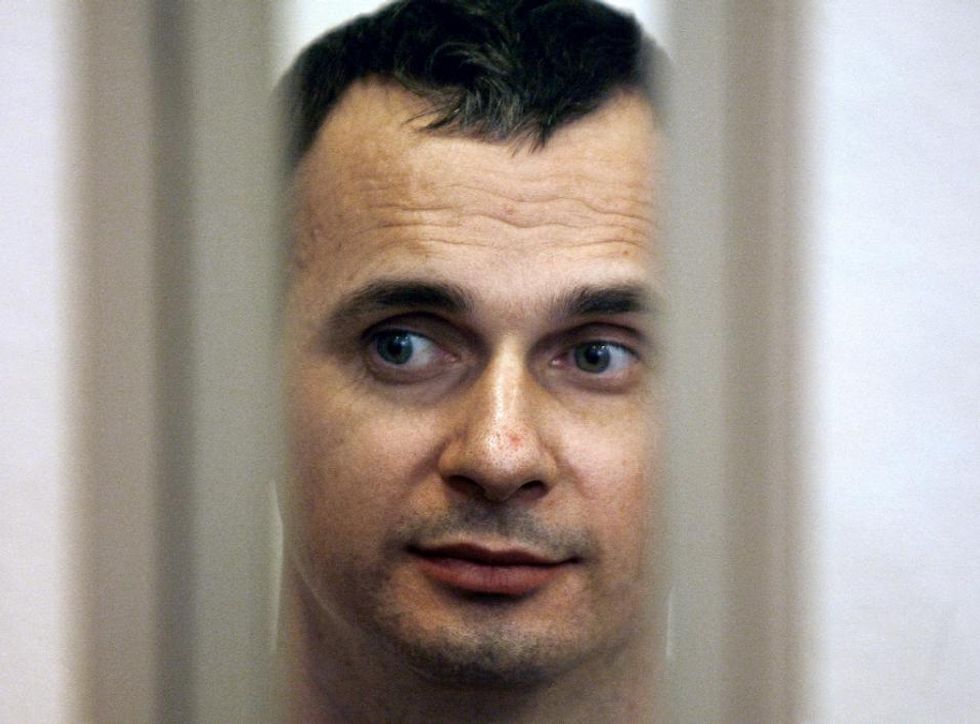 Image: Ukrainian film director Oleg Sentsov looks out from the defendant's cage in a military courtroom during a hearing in Rostov-on-Don, Russia, July 27, 2015 (AFP Photo/Sergey Venyavsky)

Ukrainians are snapping up the autobiography of film director Oleg Sentsov, who was last week sentenced by Russia to 20 years in prison in a shock ruling that sparked global condemnation.

All 2,000 copies of the book titled "Stories" flew off the shelves the day after Russia announced the verdict, and an additional print run is in the pipeline.

His countrymen are buying the collection of autobiographical stories in a poignant gesture of solidarity.

Half the proceeds from the book, which costs 50 hryvnias ($2.3) per copy, will be used to help pay for Sentsov's defence team and support his wife and two children.

"We still don't have time to process all the orders", Igor Skryl, a sales manager at the only Ukrainian store that sells the book, told AFP.

"People are writing and calling us non-stop. Sometimes it's five, ten, twenty books per customer. I've never seen such a craze before."

In excerpts released by the publisher, Sentsov tells how he rebelled against his high school teachers and took up sport despite polyarthritis and against medical advice.

It is a simple but elegant narrative also chronicling his passion for reading and cinema.

"I was born on a Monday the 13, maybe that's why my life has been fun," begins one of Sentsov's stories written long before his arrest.

Galyna Lyubchych, the project manager at the Laurus publishing house, insisted that printing Sentsov's book was not a charity project.

"It turned out to be high quality literature," she told AFP, adding that it got good reviews from established writers.

The publishers will keep printing the book as long as there is demand.

"The book has found its readers and people want more," said Lyubchych.

Sentsov, whose debut feature film "Gamer" was shown at the Rotterdam Film Festival in 2012, was arrested in his native Crimea two months after Russia seized the peninsula from Ukraine in March 2014.

He was convicted of masterminding arson attacks on pro-Kremlin party offices in Crimea and for plotting further attacks in what his supporters branded a show trial to intimidate Kremlin critics.

Sentsov's cousin said she decided to have his collection of short stories published soon after his arrest.

"He inspires many people, even from behind bars," Kaplan told AFP, expressing the hope that Sentsov would not be forgotten.

"Oblivion is the scariest thing that can happen to a political prisoner sentenced to such a long term," she said by phone from Moscow where she lives.

Many of those who bought the book said they would share copies with friends and family.

Olga Yakovleva, a 42-year-old economist from Kiev, ordered 10 copies to express her respect for Sentsov and support his loved ones.

Several copies will go to an organisation that supports children of the "Heavenly Hundred" activists who perished in an uprising that ousted Kremlin-backed leader Viktor Yanukovych last year.

Yakovleva's pro-Moscow relatives in Crimea would also get a copy. "I cut all contact with them but they recently re-appeared and asked me how I was doing. I thought I'd send them Sentsov's book. That will be my answer."

Lilya Abibulayeva, a Crimean Tatar from the annexed peninsula, also ordered a copy. There is no postal service between Ukraine and the Russian-controlled peninsula so she would rely on a friend to bring her the book.

"I want to support Oleg's family, kids and cousin," said the 31-year-old.

"And in doing so I want to express my solidarity with a man who is not afraid of political regimes, reprisals and the occupiers' revenge. I believe that everyone should make the same contribution."