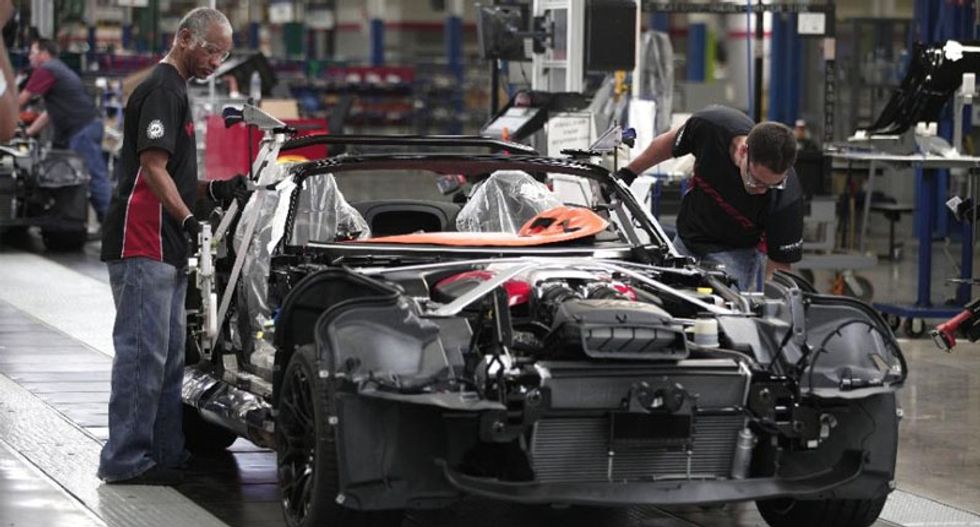 The US economy kept its jobs machine humming in July with solid growth that looked likely to leave the Federal Reserve on track for an interest rate increase this year.

US businesses have now added 13 million jobs over 65 months of growth—extending the longest streak on record.

That brought the average monthly jobs gains to an average of 235,000 over the past three months, heightening expectations that the Fed could raise its near-zero federal funds rate as early as next month.

The unemployment rate held steady at a seven-year low of 5.3 percent, as expected. That is close to the 5.0 to 5.2 percent range the Fed views as normal for maximum employment over the longer run.

"The understanding that the report was not decidedly weak is apt to keep the Federal Reserve on a desired track to raise the fed funds rate soon -- and most likely in September in our estimation," said Patrick O'Hare at Briefing.com.

The Fed has held the benchmark rate near zero since late 2008 in a bid to support the economy's recovery from the severe 2008-2009 recession, and has said it would move rates higher carefully so as not to derail growth.

In its late-July policy statement, the Federal Open Market Committee said it would consider it appropriate to raise the federal funds rate when it had seen "some further improvement" in the labor market and was "reasonably confident" that inflation will move back toward its 2.0 percent target.

"There can be no doubt in our view that today's employment report does indeed represent 'some further' improvement in the labor market -- if not more," said Harm Bandholz of UniCredit.

"It, therefore, further strengthens our view for the first rate hike in September."

The US private sector added 210,000 jobs, somewhat fewer than expected, while government payrolls increased by 5,000.

The robust US auto market encouraged dealerships to add 13,000 jobs, about a third of the total retail sector gains.

Construction added 6,000 jobs after none in June, while manufacturing bounced higher, by 15,000 jobs, after months of tepid gains.

Still, falling oil and other commodity prices continued to take a toll on employment in mining, which lost 5,000 jobs in July. Since the recent peak last December the sector has shed 78,000 jobs.

The average workweek ticked higher and the hourly wage, closely watched by the Fed for signs of tightening slack in the jobs market, edged up 0.2 percent to $24.99 after being flat in June. Year-on-year, wages were up 2.1 percent.

"Yearly earnings growth has been unable to break above 2.3 percent in the post-recession economy, a sign labor market slack may be greater than indicated by the unemployment rate," said Jay Morelock of FTN Financial.

The number of long-term unemployed -- those out of a job for at least 27 weeks -- barely budged at 2.2 million, and represented nearly 27 percent of the jobless.

The labor force participation rate was unchanged at 62.6 percent, the lowest level since 1977.

And those employed only part-time who wanted full-time jobs was little changed at 6.3 million.

Fed policymakers still have the August jobs report to digest just days before the September 16 to 17 FOMC meeting.

Fed Chair Janet Yellen has said the rate hike was likely in 2015, and the September meeting is one of three before the year ends.

"A labor force participation rate that remains at a 38-year low and wage gains that could be signaling more slack in the labor market don't make a September rate hike a slam dunk," said Nariman Behravesh, chief economist at IHS.