'US heroes' speak out after train attack: Don't ever just 'stand by and watch' 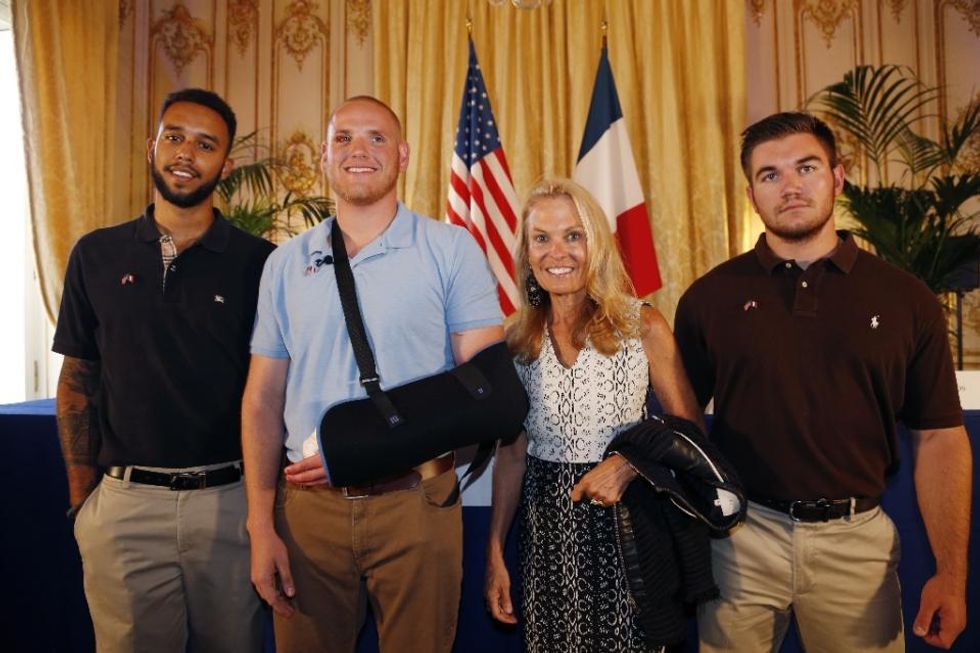 Three American friends who overpowered a heavily-armed gunman in a train poured cold water Sunday on his claim that he had no intention of waging a bloody attack and asked people never to stand by in these types of incidents.

Witnesses say he opened fire, injuring a man before being wrestled to the floor and overpowered by Spencer Stone, Alek Skarlatos and Anthony Sadler, who have been hailed as "heroes."

The trio, gathered at the US ambassador's residence in Paris for a press conference, said they had initially been sitting in another part of the train but later moved to the carriage that the gunman was targeting.

"We had first-class tickets to the carriage where the incident took place. We were sitting in a different carriage because we couldn't find it at first," said Sadler, a 23-year-old student.

Stone, who was injured by the gunman and discharged from hospital on Saturday, said he had just woken up from a deep sleep when the alleged attacker emerged.

"I turned around and I saw he had what looked to be an AK-47," said Stone, 23, his injured hand bandaged up and his right eye red.

"It looked jammed or it wasn't working and he was trying to charge the weapon," added Stone, who serves in the US Air Force.

"We tackled him and hit the ground and Alek grabbed the gun while I put him in a choke hold. He kept pulling more weapons left and right. He pulled out a hand gun and a box cutter and started jabbing at me with that."

Asked about the intentions of the gunman, who in custody has denied wanting to wage an attack and said he had merely wanted to rob passengers, Sadler said: "It doesn't take eight magazines to rob a train."

"The guy had a lot of ammo. His intentions were pretty clear," said Skarlatos, a 22-year-old member of the National Guard in Oregon who was on holiday in Europe with his friends after he had recently returned from Afghanistan, adding the gunman "never said a word."

For Sadler, "hiding or sitting back" was never going to accomplish anything.

"The gunman would have been successful if my friend Spencer had not gotten up. I want that lesson to be learned. In times of terror like that to please do something. Don't just stand by and watch."