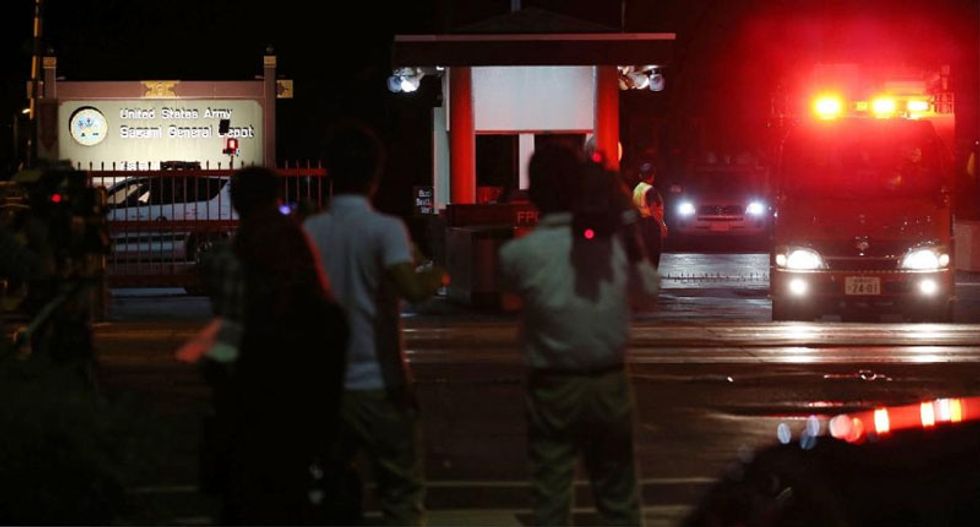 A fire engine leaves the US Army General Depot after a fire was extinguished in Sagamihara in Kanagawa prefecture, west of Tokyo on August 24, 2015 (AFP Photo/)

A blast ripped through a warehouse at a US military post on Monday and started a fire, while a blaze broke out at a steel plant, in separate accidents around the Japanese capital.

The explosion at the US Army's Sagami General Depot in the city of Sagamihara, some 25 miles (40 kilometres) southwest of Tokyo, sent sparks shooting into the sky and triggered a blaze that burned through the night, but there were no reports of injuries.

Japanese and US base firefighters delayed battling the fire while the contents of the building were assessed. Witnesses said they initially feared a bomb had gone off at the military installation.

The fire died out on its own about six hours after it started shortly before 1:00 am (1600 GMT), with firefighters standing by.

"We coordinated with US fire units, and did not spray water as we waited for information related to what was inside," an official at the Sagamihara fire bureau told AFP, adding that more than a dozen fire engines were sent to the scene.

The Kawasaki city fire department said the blaze at the plant, owned by a unit of giant steelmaker Nippon Steel & Sumitomo Metal, may have been caused by workers who were using gas burners to dismantle the site.

The fire was put out shortly after 1:30 pm local time.

"The plant had stopped operations in June, and there were not many workers in the facility at the time of the fire," a company official told AFP, adding that it was to be closed later this year.

A woman who saw the aftermath of the blast told public broadcaster NHK that she heard repeated thunderous explosions for 10 to 15 minutes.

"Orange sparks were rising quite high. I couldn't see smoke but smelled something like gunpowder," she told NHK.

The explosion at the depot -- which occupies about 200 hectares (two square kilometres) and employs nearly 600 people -- rattled the windows of nearby buildings.

The depot stores supplies and acts as a repair centre for military vehicles.

Earlier this month a series of explosions at a hazardous goods facility rocked the northern Chinese port city of Tianjin, killing at least 123 people.

Washington, which for 70 years has been the guarantor of Japan's security, has 47,000 troops and numerous bases in the country.

The Pentagon said the cause of the explosion was not immediately known, but the building did not store ammunition or "radiological materials". Nearby buildings were not damaged.

"The storage building is not designated as a hazardous material storage facility as some initial reports indicated," US Navy Commander Bill Urban, a spokesman, said in a statement.

"Inside the building that exploded were canisters of compressed gases: nitrogen, oxygen, freon and air.

"The cause of the explosion... is under investigation. There are no indications of injuries."

Aerial footage showed the one-storey building's roof had partially collapsed, while the US military said windows and doors were damaged on the concrete building.