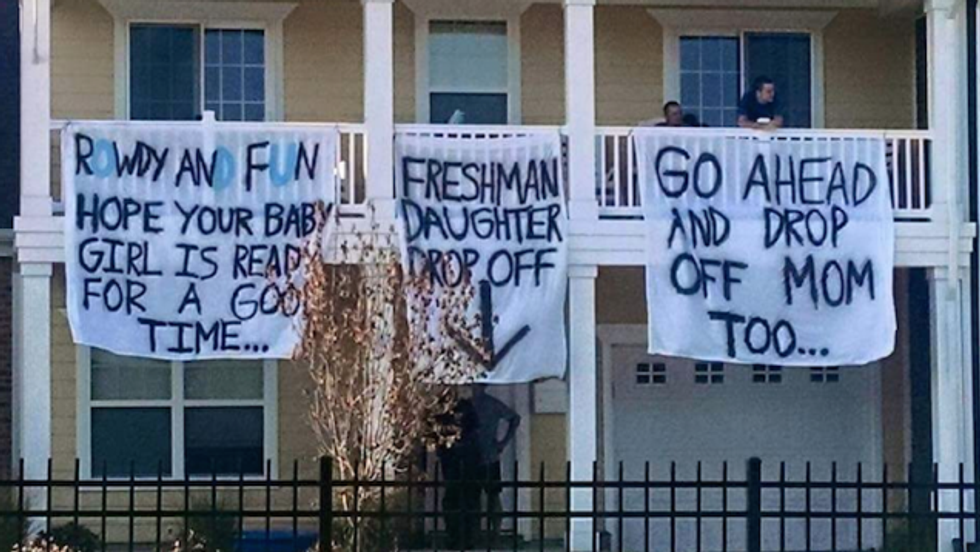 These are signs from Sigma Nu's house at Old Dominion University, signs that have, as you can imagine, been causing a lot of anger and rounds of condemnation amongst university leaders. Most of these condemnations focus on the problem of sexual abuse and violence. "Ours is a community that works actively to promote bystander intervention and takes a stand denouncing violence against women," read the ODU administration's statement.

"An incident occurred this weekend that does not reflect the University’s commitment to the prevention of Sexual Assault and Dating Violence," explained the student government statement. "Not only do these actions taken by a few individuals undermine the countless efforts at Old Dominion University to prevent sexual assault, they are also unwelcoming, offensive, and unacceptable."

And already the right wingers are defending these idiots, such a Daily Caller warning that the "PC Police" are the real problem here. And, of course, people using this as a pretext to claim that feminist insistence that it's not sex without consent somehow means that we're anti-sex. A typical comment from the Washington Post comment section:

The signs are crude and dumb, but this repulsive habit of charging "rape culture" every time a male mentions sex with a female is even more crude, more dumb, and far more dangerous. There is absolutely nothing in the signs (at least not the ones in the photo above) that even implies non-consensual sex. These lunatics throw around "rape" the way Joe McCarthy flung around "communist" and with just as much concern for truth and justice as he did.

While the banners do not overtly say "rape" on them, the implication is easy enough to see, even for people pretending they don't see it. The first sign that says "Hope your baby girl is ready for a good time" is about implying that the quote-unquote "good time" is coming for her whether she likes it or not. The other two reduce women to objects to be used. The implication is that one gets fucked by walking in the door---or being dropped off---regardless of how you feel about it. Women are rendered utterly passive objects, with no regard whatsoever for the idea that sex is supposed to be mutual.

That's why the "yes means yes" thing is so important. If you think of consent as something that is freely given and enthusiastic, the coercive element of these signs, which portray women as basically fuckholes who have no say in how they're used, is staring you right in the face.

This is particularly troubling in light of what we know about campus rape. The first six weeks of college, when you're a freshman, are known by sexual assault experts as the "red zone". The idea is that rapists zero in on freshmen girls, knowing that they are eager to please, wet behind the ears, probably don't have much of an alcohol tolerance, and particularly excited by the romantic possibilities that college offers. The combination means it's easy to get them really drunk and get them alone to rape them, often with the added assurance that these young women living their first days away from home might be especially afraid of fighting back. This sign, of course, endorses and celebrates such predation, singling out freshmen girls in particular as naive and immature and inexperienced and therefore easy prey. If you're a rapist and you see this sign, you will naturally and with good reason conclude that these guys think you are awesome and your raping habits make you a cool guy.

But, of course, that comment shows what rape apologists always do: They suddenly pretend they are aliens from another planet and only learned human language last week and therefore are incapable of picking up on humor, implication, non-verbal communication and nuanced language. They pretend to ascribe to a form of communication so literal that even the slightest bit of metaphor or implication, to hear them talk, sends them spinning into a state of confusion. It's a world where the only way to say "no" is to say it loudly and repeatedly, though even then the rape apologist will claim that they have heard that sometimes it means yes, and because of their alien brain, they simply can't tell the difference. Or, in this case, they'll play dumb about the obvious implications of rape in this joke. I'm happy to see that the school leadership is not letting the playing dumb act control how they react to this, and instead simply calling this behavior out for what it is.