Waist deep in the big bloody: It's the NRA's country -- we're just dying in it 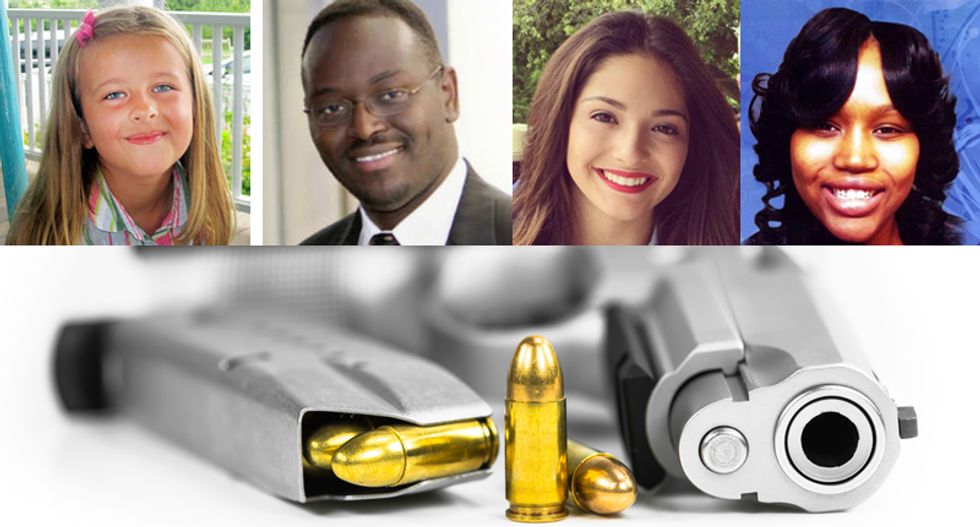 "I read the news today, oh boy" - The Beatles

Wednesday morning I woke up and -- as I do every morning -- immediately flipped open my iPad to see what fresh hell the day had already brought.

Just another hellish day in America where any disgruntled loser can freely exercise his 2nd Amendment rights to purchase a high powered weapon and kill people over an imaginary grievance. Exactly as the founders intended, I am led to believe.

So for the rest of the day I flat out gave up on the news and the Internet and the sickness that cannot be cut out of this country because of the tyranny of an unyielding gun-crazed minority who have turned America into an abattoir.

I shut my iPad and left the house and went and had breakfast and then went to the San Diego Zoo till closing time. While there I watched stunningly beautiful and graceful animals only to be reminded me that -- in the wild -- they also might be shot by some ostentatiously masculine asshole out to test his skills at a good safe distance with a high powered weapon.

Because there is no getting away from it. This American way of accepting killing as a way of life.

And I am sick to death of it.

Without even looking I knew that the conversation on Wednesday would immediately turn to anything besides the fact that we have too many guns in this country and that we will NEVER EVER do anything about it.

So I checked out for the day because life is too short --- not that being outside and in the wrong place at the wrong time when stray bullets are flying doesn't increase the odds of making it even shorter.

The shooting in Virginia wasn't about mental health or about race, sexuality, imagined slights, or #BlackLivesMatter. It was more proof that we live in an a culture of death by gunshot wound and the fact that these shooting tragedies keep happening because we always end up looking the other way. One or two news-cycles later we're already shrugging our shoulders and giving up until the next shooting after which we repeat the process of hopeless acceptance all over again. Why? Because there are no adults in this country willing to stand up to the cynical self-serving grifters who manipulate incredibly stupid people into a paranoid  Congressional-office-calling mob while, at the same time, emptying out their wallets in the name of  protecting "freedom."

By the way, freedom isn't "just another word for nothing left to lose" if you are a gun manufacturer. Congress made sure that  gun manufacturers can't lose when someone takes their products -- designed to kill -- and puts them to use.  There is no sweeter deal on Earth than that, I can guarantee you.

That's because a fat check (the carrot) or the the threat of being primaried (the stick) can make almost any politician roll over on their back and piddle on their belly on command. The death of someone else's child by a maniac or some buffoon "cleaning his gun" the next house over is a small price to pay when another two years in the House of Representatives is at stake. Better to issue a statement saying "my prayers are with the families" over this "tragedy" than initiate a search for your soul.

Make no mistake about it:  the NRA is a terrorist organization and they have blood on their hands for almost every one of the estimated 33,000 gun related deaths each year-- slightly less than the equivalent of having a 9/11 every month.

Try to rein in the sale of guns --even to people with mental illnesses of a history of stalking or domestic abuse -- and watch the NRA shoot it down, which is one of the many reasons why we are where we are today. It just so happens that I do have a proposal that won't stop the killings, but might save a few innocent lives.

In June, Dan Hodges tweeted this:

I suggest that we scrape off the words of Emma Lazarus on the Statue of Liberty that read:

"Give me your tired, your poor,

Send these, the homeless, tempest-tost to me,

I lift my lamp beside the golden door!"

... and replace them with

"America has decided killing children is bearable as long as we get to keep our guns. Enter at your own risk."

After all, we put warnings on packs of cigarettes. Why not provide a simple caveat about a different kind of cancer that afflicts us and for which we have no interest in seeking a cure?