Wastewater spill from Colorado gold mine triples in volume: EPA 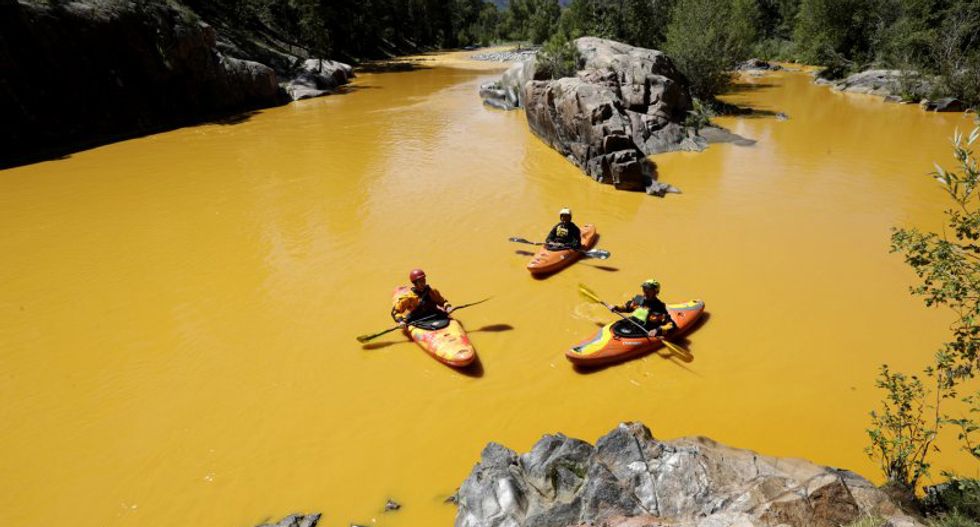 Image: Kayakers on contaminated water from the Gold King Mine spill

Some 3 million gallons of toxic wastewater, triple previous estimates, have poured from a defunct Colorado gold mine into local streams since a team of Environmental Protection Agency workers accidentally triggered the spill last week, EPA officials said on Sunday.

The discharge, containing high concentrations of heavy metals such as arsenic, mercury and lead, was continuing to flow at the rate of 500 gallons per minute on Sunday, four days after the spill began at the Gold King Mine, the EPA said.

An unspecified number of residents living downstream of the spill who draw their drinking supplies from their private wells have reported water discoloration, but there has been no immediate evidence of harm to human health, livestock or wildlife, EPA officials told reporters in a telephone conference call.

Still, residents were advised to avoid drinking or bathing in water drawn from wells in the vicinity, and the government was arranging to supply water to homes and businesses in need.

The spill began on Wednesday after an EPA inspection team was called to the abandoned mine near the town of Silverton in southwestern Colorado to examine previously existing wastewater seepage.

As workers excavated loose debris at the site, they inadvertently breached the wall of a mine tunnel, unleashing a flow of the orange-tinged slurry that cascaded into Cement Creek and then into the Animas River downstream.

The town of Durango, Colorado, roughly 50 miles south of the spill site, shut off its intakes of river water as a precaution, according to the EPA.

By Friday, the main plume of the spill had traveled some 75 miles south to the New Mexico border, prompting utilities in the towns of Aztec and Farmington to shut off their intakes from the Animas as well, local authorities said.

Agency officials said they were consulting with representatives of the Navajo Nation, whose sprawling reservation borders Farmington and the San Juan River, which is fed by the Animas River and has also been tainted by the spill.

EPA previously estimated 1 million gallons of wastewater had been released since Wednesday, but on Sunday the agency revised that up to 3 million gallons, based on measurements taken at a U.S. Geological Survey stream gauge.

In recent days, EPA has been diverting the ongoing release into two newly built settling ponds where the waste was being treated with chemicals to lower its acidity and to filter out dissolved solids before being discharged to Cement Creek.

The creek's water quality has already been badly degraded from a long history of acid mine drainage in the area, agency officials said.

Preliminary water sampling from the creek and Animas River showed that concentrations of heavy metals briefly spiked in areas reached by the wastewater plume but appeared to clear considerably once it had passed downstream, EPA regional Administrator Shaun McGrath said.

EPA officials said that by Sunday, a delineated "leading edge" of the contamination flow was no longer visible from aerial surveys, indicating concentrations of wastewater were diminishing.