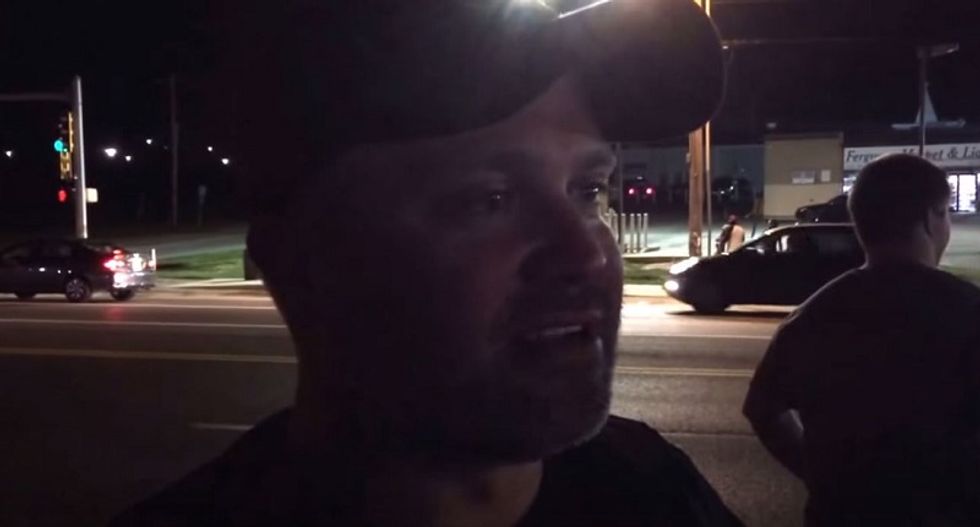 A black journalist questioned the privilege of Oath Keepers, who are armed, predominantly white men, and their presence in Ferguson amid mass protests against racism and police violence.

The journalist, who is not named, points out to InfoWars reporters Joe Biggs and Jakari Jackson that the visibly armed militia they are traveling with, the Oath Keepers, is mostly white. Black Americans couldn't hope for that kind of permissive treatment from law enforcement.

According to Reuters, the Oath Keepers are in Ferguson to protect an InfoWars "reporter." While police have condemned their presence, they haven't taken any actions against them.

The exchange was posted to Alex Jones YouTube channel. Jones heads InfoWars, which is dedicated to propagating conspiracy theories.

"The question is when you guys appeared, you guys came with several people that were armed -- had decent artillery on them. But amongst the people that were visibly carrying assault rifles and stuff like that, you didn't have any African-American troops or soldiers or whatever with you," the journalist says. "So what people are seeing, they're sort of getting this depiction that it's some sort of like white privilege... But if it was black folks that came down here with the same kind of armor on them..."

The conversation shows an apparent disconnect between the group and the black community.

"Remember when red, white and blue used to mean freedom and liberty?" Biggs asks. "Now when you see red white and blue, what is it, it's in the rear view mirror. You don't feel safe anymore."

He tells the journalist it’s his job as an American citizen to exercise his Second Amendment right to carry a gun.

Biggs then talks about "all these other countries where they bring the women, the children in the militias at a young age, you see women riding up and down the street on bicycles with AK-47s on their back. There's zero crime in those areas."

It is unclear what countries he's talking about.

Jackson, who is African-American, then mentions that the Black Panthers used to walk around with their guns "just like these men." But the Oath Keepers, unlike the Panthers, have demonstrated apparent immunity from government prosecution, hunkering down heavily armed at Bundy Ranch in Nevada and mines in Oregon and Montana and openly defying the government, with no consequences.

On the other hand, the government campaigned to destroy the Panthers, assassinated leaders and raided headquarters. Fred Hampton and Mark Clark, for example, were killed in a Chicago raid on Hampton's apartment in 1969. Hampton was only 21 years old. Days later, the Panthers' Los Angeles headquarters on 41st and Central was raided in a legendary shootout with the LAPD. The Root points out that the gun control movement started when conservatives wanted to disarm the Panthers.

The conversation was milder than when InfoWars was confronted last year by a black Ferguson resident who was angered by Oath Keepers calling protesters "terrorists" and the race rhetoric of Jones.

"You know, a lot of people say you a sell out because Alex [Jones] is using you," the protester tells Jackson. "You his stooge. Alex is a racist. And so is that other cat you down here with."

"You're in my hood," the man says. "You a visitor here. Remember that."

It's not the first time Alex Jones' crew has been passionately rebuked by locals. In 2013, InfoWars' Dan Bidondi was cursed out by a Boston native who was infuriated by the conspiracy theory group's claim that the FBI was behind the Boston Marathon bombing and that it was a "false flag" operation.

Oath Keeper talking to journalist in Ferguson this week:

Dan Bidondi confronted in Boston in 2013: