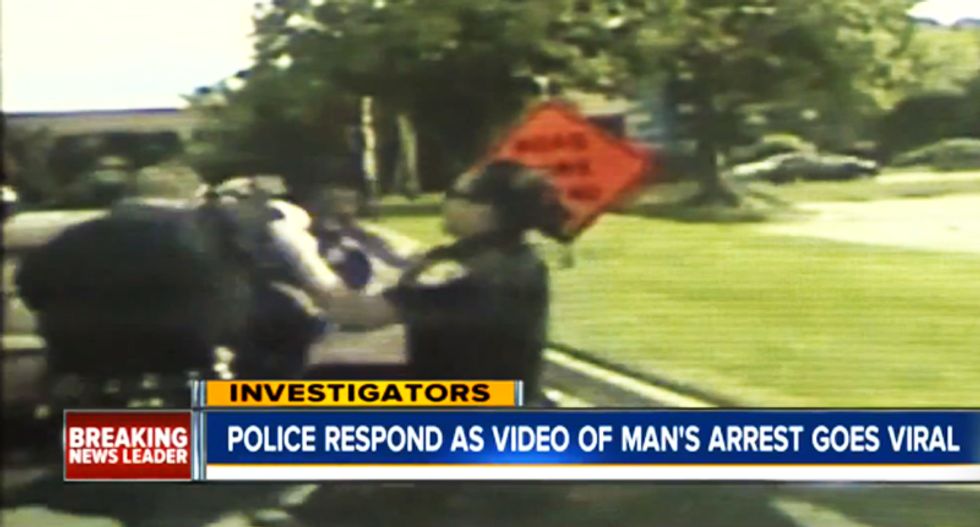 Police in Lenexa, Kansas are defending the actions of two police officers who were criticized for assaulting a black man during a traffic stop after a brief 30-second snippet on the incident was posted on Facebook and went viral.

According to KSHB, body cam and dash-cam video shows the two arresting officers wrestling the man -- identified as 30-year-old John Harrison --  to the ground only after he turned and attempted to throw a punch at them as he was being handcuffed.

"It's only a 30-second snapshot of what actually occurred," Layman said.

The 30-second snippet was recorded by John Sherman who was eating at a nearby restaurant and only shows the struggle, with Sherman admitting that he couldn't see clearly what preceded it.

"When they walked him around to the back of the car, I didn't really see him do anything that warranted being thrown to the ground," Sherman said.

After Sherman posted the clip to his Facebook page prompting outrage, the Lenexa police released the full video that shows a different story.

According to police, Harrison was pulled over for driving without a seat belt and, after saying he didn't have his license on him, police discovered that he was driving on a suspended license and had several warrants for his arrest outstanding.

According to Sherman who filmed the clip, officers at the scene asked him st stop recording the encounter, however Layman said the officers only asked him to step back from the scene.

"They need to realize, we don't know what you're doing there, or if you have a weapon," Layman said.

Harrison has been charged with assault on the officers in addition to the other charges pending against him.

Watch the video below from KSHB: