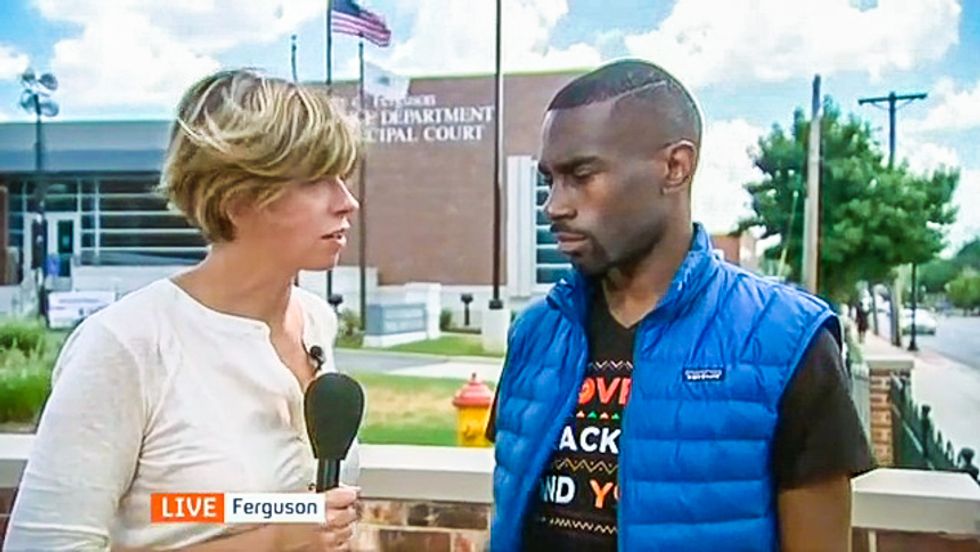 Kylie Morris of Channel 4 in Britain visited Ferguson on Tuesday and tried to explain to the British people why white "Oath Keepers" were allowed to openly carry firearms on the street while peaceful black protesters were arrested.

"The men, calling themselves Oath Keepers, only added to the already simmering tensions," a Channel 4 anchor noted before tossing to Morris for a live report from Ferguson.

Morris told her British audience that the commemoration of the one year anniversary of Michael Brown's death had been interrupted by armed Oath Keepers, who claimed that they were there to protect businesses and conservative journalists.

"But certainly their presence, their state of wearing uniforms, military-type uniforms -- some of them are ex-military, some of them are even serving police, we're told," she reported. "They were, you know, carrying weapons."

The Oath Keepers, however, "openly carry sidearms and semi-automatic weapons as is their right," she said.

"You and people who look like you, white males, have the sovereignty to walk around with assault rifles," one black protesters told a white Oath Keeper, "But we [black protesters] can't even like stand out here and assemble peacefully and exercise our constitutional right to do so without being gassed, maced and arrested."

"I don't have a perspective," the Oath Keeper replied flatly.

Morris said that she had a hard time understanding why police would arrest otherwise peaceful protesters.

"It's hard to know how this keeps the peace, putting civil rights leaders in handcuffs, including the prominent philosopher Cornel West and Black Lives Matter activist DeRay Mckesson during a peaceful sit-in outside the federal court," she remarked.

During an interview with Mckesson, she asked if the police appeared to be taking retribution on the protesters for all of the negative attention the Black Lives Matter movement had brought to the area.

"There is a long history of law enforcement targeting people who are fighting for their rights," Mckesson told Morris. "The reality is that the status quo didn't just happen overnight, the status quo [developed] over many years and people work hard to reinforce it, including the police."

Morris noted that there was a "right-wing push back" against the Black Live Matter movement, which she said "feels more and more vociferous every day."

"There are people whose bread and butter is sustaining racist oppressive systems like for-profit prisons," Mckesson said. "The right's response to us is a sign the movement is working."

As for the Oathkeepers, Mckesson said that they were a reminder that law enforcement in Ferguson "police based on race."

"If black people had come out with rifles like that, it would have been sheer pandemonium outside," he added. "But white people, there was no response by the police. They left, they didn't return."

"And that's real. Policing is racially coded in places like Missouri and places all over the country."