WATCH: Man shouts racial slurs and pulls knife on teens -- so they swipe his Confederate flag 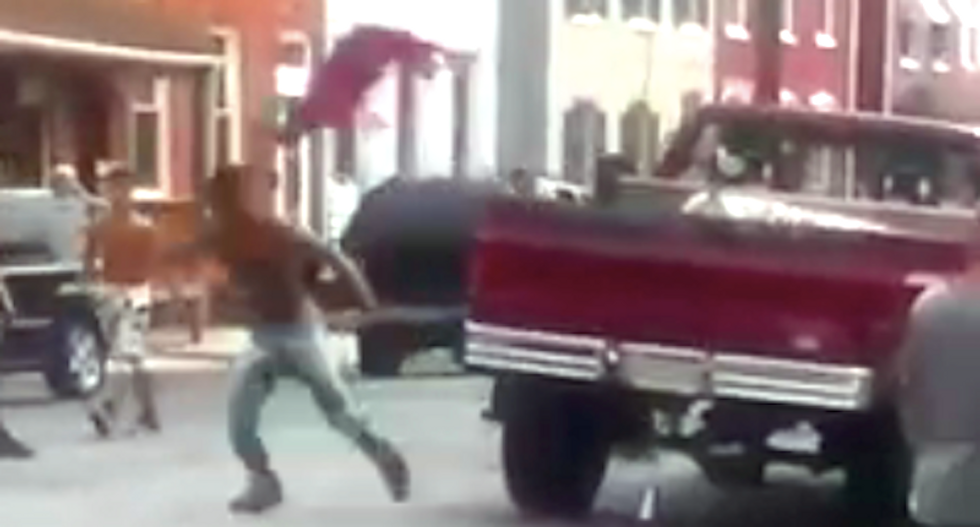 A Pennsylvania man known for driving around town flying a Confederate flag from his pickup and taunting passersby with racial slurs was charged after pulling a knife on a group of black and Hispanic teens.

The incident was caught on cell phone video recorded by several bystanders Monday in Columbia, where a group of teenagers took the Confederate flag from the pickup driven by David Chohany.

Chohany said some teens surrounded his truck after he stopped at a pharmacy and said they were offended by the flag, and Chohany told WPMT-TV he tried to drive away after the young men began "fiddling with my lights and stuff."

However, multiple witnesses told police that the confrontation began after Chohany stopped and shouted racial slurs at a group of teens, and he got out of his pickup armed with a knife after the teens reacted angrily to his insults.

A crowd gathered, and a 16-year-old visiting from New Jersey pulled the Confederate flag from the pickup, stomped on it and then tried to flush it down a toilet at a nearby laundromat, reported Lancaster Online.

Video of some of the columbia incident from yesterday

Posted by The Realest People of Lancaster on Tuesday, August 11, 2015

Chohany admitted that he brandished a knife during the confrontation, but he doesn't understand why he's the only person charged in the incident.

“They didn’t get anything, but I get charged with pulling my knife out, which doesn’t make any sense to me,” Chohany said. “I was defending myself, my family and my truck, and I got the short end of the stick.”

Police said they would also charge the teen who took the flag, but the boy's mother said she was not angry with her son.

"I know what my son did was wrong," the teen's mother said. "He should have never taken that flag, (but) I'm not mad at him, either, though. They see a crowd of blacks and Hispanics and keep yelling racial slurs."

Chohany's girlfriend insisted he did not use any racial slurs during the confrontation -- but each of six people interviewed Tuesday by Lancaster Online said Chohany is known in the town for taunting passersby with racial slurs and other insults as he drives around.

A white mailman said Chohany had insulted him as he delivered mail.

No injuries were reported during the confrontation, and police said no one in the crowd brandished any weapons.