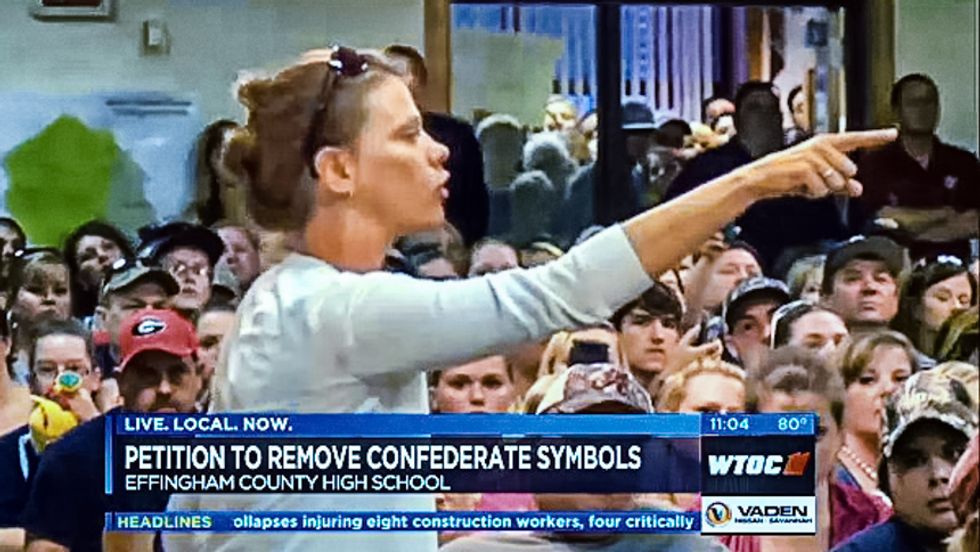 Members of the NAACP were booed and called "racist" by white residents on Tuesday as they tried to make their case for removing Confederate symbols at Effingham County High School in Georgia.

According the WTOC, over 500 people showed up at the Effingham County High School Board meeting on Tuesday to debate whether the school should stop using a Confederate soldier mascot and the pro-slavery anthem "Dixie" as a fight song.

"We have come to make a petition to right the wrong that should have been corrected 60 years ago,” Effingham NAACP President Leroy Lloyd announced in front of the rowdy crowd.

Also speaking on behalf of the NAACP, First Union Baptist Church Pastor Franklin Blanks, Jr. asked the school board to respect all citizens.

"We asked that you discontinue the use of Dixie as a school fight song," Blanks said, sending the crowd into an uproar.

"You try to erase my heritage, you try to erase anything that you think is racist," one supporter of the Confederate symbols told Blanks. "But the whole time you were over here, sir, I apologize, but everything you said was racist."

That sentiment earned a standing ovation from the mostly-white audience.

WTOC reported that some of attendees were nearly escorted from the meeting by law enforcement, but it was not clear which was causing the disturbance.

The school board said that a decision would be made at a later date.

Petitions both for and against the Confederate symbols are being hosted by the website Change.org.

Watch the video below from WTOC.