What's behind the conspiracy theory about "coerced" abortions 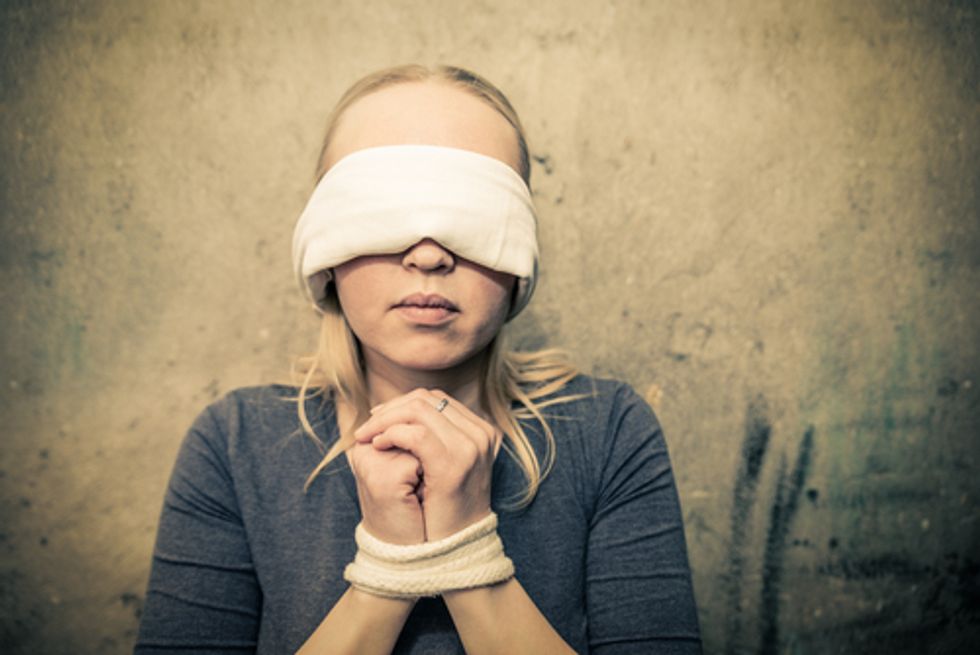 So the amount of conspiracy theorist bullshit around Planned Parenthood is growing dramatically, as Fox News is adding the anti-choice myth that women don't choose abortion, but are forced into it by an evil feminist/male pervert/gynecologist conspiracy to make women, uh, "sexually available":

Penny Nance of Concerned Women For America: "Planned Parenthood is not a safe place for vulnerable women. It is a place that exploits women. And now we know, coerces them into abortion and sells their baby parts."

She may be busting out the "now we know" language, but this conspiracy theory that holds that women don't choose abortion but are tricked into it by sex cultists has been popular in anti-choice circles for a long time. Yes, they really do believe that women who schedule abortions show up and are surprised when they doctor is like, "Tah-dah! You are no longer pregnant."

This claim that women do not choose abortion, but are coerced into it, was drafted for politically convenient reasons. Anti-choicers realize that by claiming that abortion is "murder", they are arguing that 3 out of 10 women in the United States should be in prison serving a life sentence---or even, by their own measure, be slated for a death sentence.

Now, to be clear, they don't really believe it's murder. That's just a typical right wing hyperbolic story that paints them as the good guys  to cover up for their true intentions, just like posturing about "voter fraud" is there to cover up for attempts to keep black people from voting and posturing about "traditional marriage" is there to cover up for attempts to oppress gay people and posturing about "religious freedom" is about trying to make birth control as hard to get for as many women as possible. But they find it a convenient cover, because claiming abortion is murder makes them more sympathetic than admitting that they don't like the idea that women can have sex without "consequences".

But that puts them in a bad spot, because, of course, if abortion is murder, then women are murderers. So they've concocted a rhetorical move to avoid having to argue that a third of women are killers: Deny that women actively choose abortion. Play off cultural beliefs that women are less intelligent than men, that women are hysterical and need a firm hand, usually that of an older man or a churchy lady, to guide them to what they "really" want, which some outsider knows better than they do, because you know how women are. It's gross and it's sexist, but it's a better rhetorical strategy than the alternatives, which are telling the truth---that they think women who have sex are naughty and need to be brought into line---or calling women murderers.

What is fascinating about this rhetorical move, however, is that it basically, without saying it, still conveys their usually unspoken ideas about women and sex: That women are (or should be, anyway) not interested in sex. Liking sex for its own sake is often euphemistically called "acting like men". In the conservative Christian ideology, women who like sex are seen as either unnatural or, more often, as lying about their desires, putting on a front to trick people into thinking they're "like men" because hipster-feminists-deluded-want-attention-fill-in-your-misogynist-stereotype. And that a woman's true desire is only for motherhood, and if women were honest with themselves, they would realize that they don't want  all that icky sex stuff anyway, but that it's just a trial you endure to please men and make babies.

So that's the ideology underpinning this claim that women are coerced into abortion. The standard anti-choice narrative goes like this: Women these days, eager for male attention, have all this sex they don't want in the vain hope that it will make some man like them. But, of course, as they believe, men cannot actually like women, who are icky. So women, being dumb as we know women are, foolishly don't realize that they need to withhold sex in order to blackmail a man into pretending you like you enough to marry you so he can get some sex.

Anyway, stupid women, unable to learn about the sex blackmail racket because feminism, end up having all this hook-up dirty sex and get pregnant. But, because of a liberal feminist conspiracy, men don't commit to women anymore and so said women, who just wanted babies and marriage (even if they don't know that), are left bereft and abandoned. So, in desperation, they go to the abortion clinic, where greedy doctors tell them that they have to have an abortion. They may even try to escape, the delicate maidens, but they will be held captive until they give those fetus killers their fix. But if those women only knew that if they just kept their babies, the caddish men they sleep with will suddenly morph into the princes of their dreams, turning them into loving mothers and wives and they never have to have sex again, except on his birthday. The end.

That's the narrative that Penny Nance is invoking with there "coerced" blather. A lot of conservatives also think this is some gotcha on feminists, because they have this idea that feminists think all sex is rape, so they can just tweak that to say that all non-procreative sex is rape. But that is, of course, not how things work. Most sex is consensual and women get raped not because they are dumb bimbos who don't know how to protect themselves, but because rapists choose to rape them. And abortion is, whether conservatives want to agree or not, a voluntary act. Women choose to pick up the phone. They ask for abortions. No one asks for rape. The attempts to confuse the issue speak more to the conservative inability to understand what consent is and what it is not than anything else.