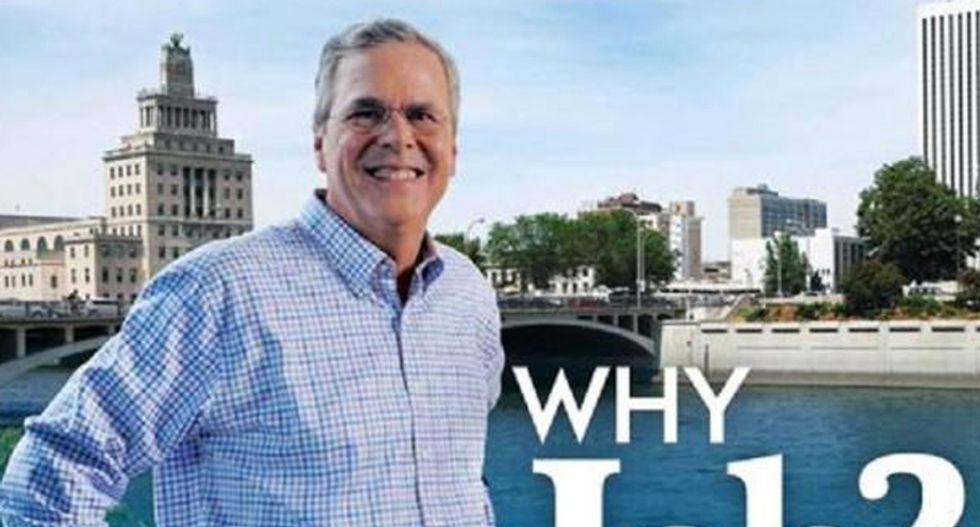 A Jeb Bush-supporting Super Pac has issued a campaign leaflet which appears to show the Republican presidential candidate with one white hand and one black.

“Why Jeb?” asks the mailer, which was sent to 86,000 early-voting Iowans and shows the former Florida governor standing before the Third Avenue Bridge in Cedar Rapids, city hall rising in the background.

As Bush, the establishment favourite, trails the real-estate mogul Donald Trump by double digits in most polls, the question may have seemed worth asking – and answering. But among the public, the image prompted only bemusement and ridicule.

Closer inspection of the mail, which was sent out by Right to Rise USA, prompted further questions.

What, for instance, is going on with the perspective? The leaflet shows Bush with a giant head, a political Godzilla to scale with city hall.

Why does Bush appear to hover somewhere over the Cedar River, neither level with the shrubbery nor in any clear relation to the water? Is he supposed to be floating, messianically, over the waves? Is he somewhere else, standing in the blue ether with his name?

More mundane explanations are also possible. Perhaps Right to Rise knew that Bush has never grinned with hands akimbo in the center of Cedar Rapids, and a staffer therefore superimposed him awkwardly on to an easily found stock photo of Iowa’s second-largest city.

Following that notion, other questions arise. Why does Bush’s shirt appear to glow in florescent tints of turquoise and purple? Is he making a statement as the candidate for bioluminescent conservatives?

And what’s with the question itself? It seems to cry out for a comma that would turn the two words into an expression of Americans’ apparent exhaustion with political dynasties : “Why, Jeb?”

Clearly, the Super Pac meant “why Jeb?” in the sense of “why should Iowans vote for Jeb?”. But the image and and text have no real context. This could be an ad for almost anything.

“Jeb” might be the name of a new cholesterol medicine; the bespectacled man in the distracting shirt could be the doctor you should consult before asking whether Jeb is right for you.

Then there’s that hand. It is several skin tones darker than any tan a son of George HW and Barbara Bush has ever managed – and much darker than the skin of man who once registered himself to vote as Hispanic and then tweeted: “My mistake! Don’t think I’ve fooled anyone!”

The leaflet and its many questions are not directly attributable to the Bush campaign – under federal law, Super Pacs are not allowed to co-ordinate with candidates. But it is doubtful it fooled anybody either. No mailer is going to introduce the son of one former president and the brother of another as a new political force. Millions of dollars cannot do the work of one good Photoshopper . Jeb Bush is still white.

Right to Rise USA did not immediately respond to a query about what happened to Bush’s left hand. 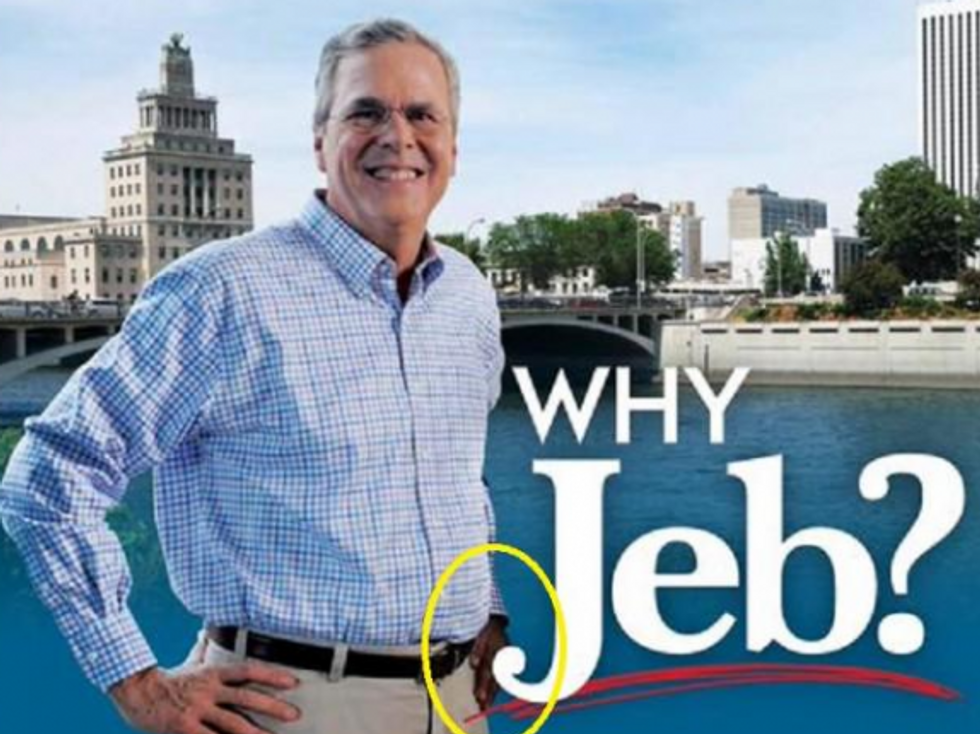