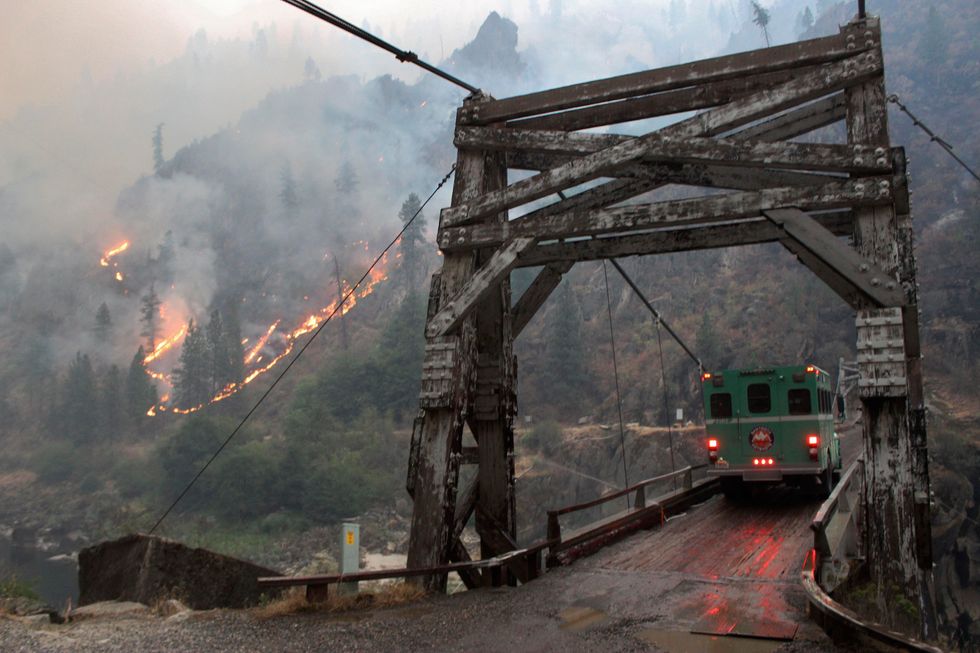 The TePee wildfire is seen burning at the Manning Bridge as it crosses the Salmon River near Riggins, Idaho, in this U.S. Forest Service picture taken August 29, 2015. REUTERS/US Forest Service/Don Jaques/Handout via Reuters

Rescue teams scrambled for a fourth day to evacuate dozens of rafters and campers from a popular stretch of Idaho's Lower Salmon River threatened by a massive wildfire on Monday, even as a cooling trend helped crews battling flames in the Pacific Northwest.

The evacuation began on Friday after an 18-mile (29-km)portion of the river east of the Oregon border was closed to boating and fishing due to the Tepee Springs fire, which has charred more than 78,000 acres (316 square km) of the Payette National Forest and surrounding timber.

Sheriff's deputies and federal land agents on jetboats swept the river in search of rafting parties and campers and on Friday hurriedly evacuated 70 individuals to safety as fire advanced on an area where they had initially taken shelter.

That spot was overrun by flames on Saturday as the blaze jumped the river, which fire managers hoped would serve as a natural fire break, said fire command spokesman Jose Acosta.

Another 72 people were safely escorted out of harm's way on Sunday, and 37 more were expected to be evacuated through Wednesday, Acosta said.

The same fire prompted authorities to place Riggins, Idaho, a town of several hundred people, on standby for evacuation, after flames burned to within a few miles of the community. Residents were already forced to flee from dozens of homes in the area, Acosta said.

Idaho is one of several Western states plagued by an outbreak of dozens of large wildfires since mid-August as a severe heat wave gripped the drought-stricken region.

Cooler, damp weather offered a respite to firefighters in Pacific Northwest over the weekend, with the cooling trend forecast to persist through Monday.

A second contingent of National Guard troops was dispatched on Monday to reinforce crews battling a lightning-sparked cluster of wildfires dubbed the Grizzly Bear Complex, which has destroyed five homes and scorched nearly 75,000 acres (304 square km) of wilderness in eastern Oregon. That fire was listed as 17 percent contained.

A much larger fire that has blackened 376,000 acres (1,522 square km) and leveled 43 homes in south-central Oregon near the town of John Day was nearly 50 percent contained by Monday.

Rain and cooler temperatures in central Washington also assisted crews fighting the Okanogon Complex, which killed three firefighters the week before last, and the North Star fire roaring through the Coleville Indian Reservation to the east. Those blazes were estimated to be 30 percent and 22 percent contained, respectively.