Wisconsin man asks neighbor to remove Confederate flag and fight breaks out: 'I called him the N-word' 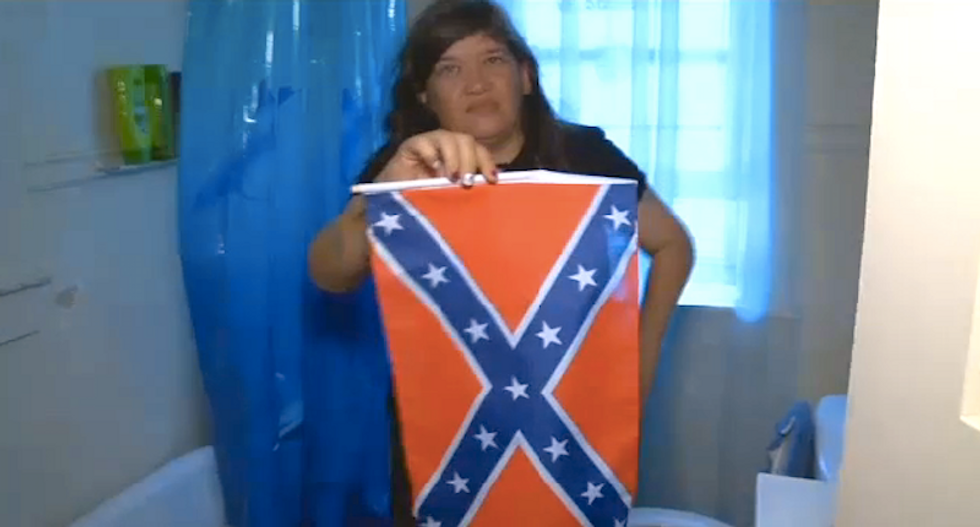 A fight broke out after a black Wisconsin man asked his white neighbor to remove a Confederate flag hanging in her kitchen window and she responded by calling him a racial slur.

Tajuan Boatner walked past Toni Barribeau's home Friday in Racine and spotted the flag, so he approached her door and knocked, reported WDJT-TV.

"He said, 'I know you're probably racist, (but) can you please take it down?'” Barribeau said. “I said, 'Fine, but I will probably put it in another window.'"

She said the 37-year-old Boatner came into her home, knocked her to the ground, took down the small Confederate flag and tried to destroy it, and the argument continued inside.

"I called him the N-word, but still that doesn't mean you can put your hands on anybody,” Barribeau said.

Police said Boatner, who was wanted on outstanding warrants, argued with officers and resisted arrest.

Barribeau, who said she suffered bruises during the altercation, was also arrested and received a citation because police said she had an opportunity to go inside her home, shut the door and call for help instead of escalating the confrontation.

"Because I argued with him,” she said. “It escalated and I got arrested."

Another black neighbor said Barribeau had asked her if the flag bothered her, and she told the woman she had no problems with her display.

Barribeau has kept the flag, but it's now taped to a wall inside her kitchen instead of displayed where it can be seen outside.

"I'm not going to say it's racist and it's not racist,” said Barribeau. “They have their own opinion and the education they have for the Confederate flag."

Barribeau said she plans to fight her citation for disorderly conduct.