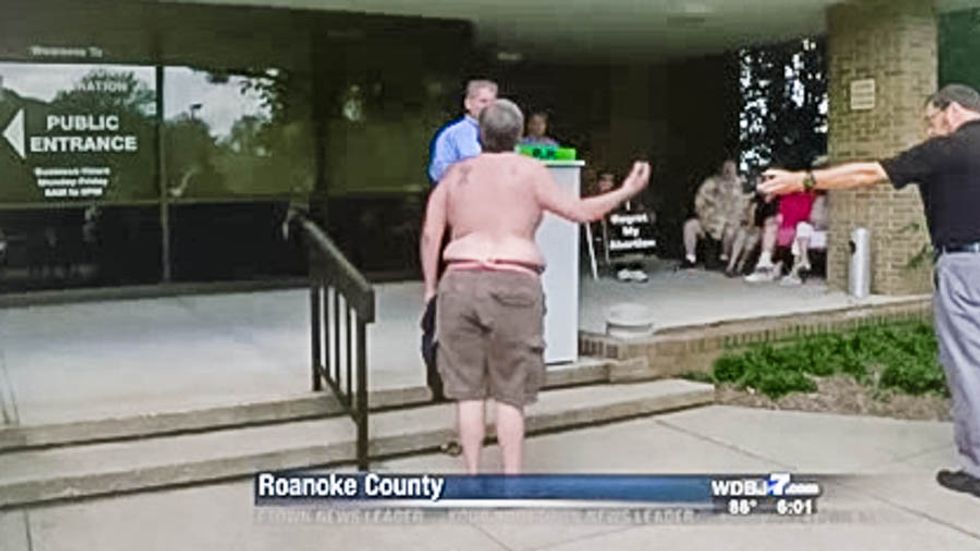 Roanoke County Supervisor Al Bedrosian was interrupted by a breast cancer survivor as he was pushing to defund Planned Parenthood at a recent press conference in Virginia.

According to The Roanoke Times, Bedrosian had been on a "crusade" to defund the United Way since a conservative group released deceptively edited videos of Planned Parenthood employees speaking about fetal tissue donations.

“Let’s make everybody happy,” Bedrosian told a group of anti-abortion activists in front of the county administration building. “Those that want to support Planned Parenthood, go for it. Do it. We’ll continue to pray on our side that we get out of this business of killing babies, but you can do it if you want. That’s freedom in America. But to actually enhance, facilitate or enable it through county government is where I have a problem.”

A woman who was identified as Leigh Anne Woods by WDBJ walked up the podium and took her shirt off as Bedrosian was speaking.

"You have a problem because they perform abortions, look at everything else they do, they save lives!" Woods said.

Woods told WDBJ that she wanted to show the county supervisor the scars from the mastectomy she had just weeks earlier, and she credited Planned Parenthood for saving her life.

This week, Bedrosian's colleagues accused him of orchestrating a "bullying" campaign by asking anti-abortion supporters to send angry emails to government officials until his demands were met.

Roanoke City Manager Chris Morrill said that some of the emails alleged that Planned Parenthood “is doing the work of Satan.”

Watch the video below from WDBJ.