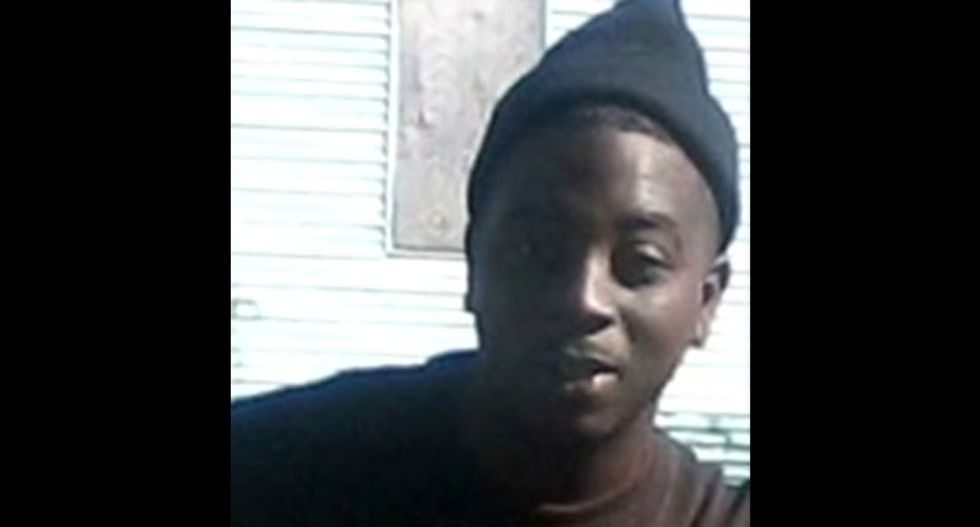 Image of Jamycheal Mitchell from a GoFundMe page (Screenshot)

A young black man arrested by police in Portsmouth, Virginia, on the same day that one of the city’s officers fatally shot an unarmed black 18-year-old, has been found dead in jail after spending almost four months behind bars without bail for stealing groceries worth $5.

Jamycheal Mitchell , who had mental health problems, was discovered lying on the floor of his cell by guards early last Wednesday, according to authorities. While his body is still awaiting an autopsy, senior prison officials said his death was not being treated as suspicious.

“As of right now it is deemed ‘natural causes’,” Natasha Perry, the master jail officer at the Hampton Roads regional jail in Portsmouth, said of his death in an interview. Perry said there were no obvious outward signs of injury to the 24-year-old’s body.

Mitchell’s family said they believed he starved to death after refusing meals and medication at the jail, where he was being held on misdemeanour charges of petty larceny and trespassing. A clerk at Portsmouth district court said Mitchell was accused of stealing a bottle of Mountain Dew, a Snickers bar and a Zebra Cake worth a total of $5 from a 7-Eleven.

“His body failed,” said Roxanne Adams, Mitchell’s aunt. “It is extraordinary. The person I saw deceased was not even the same person.” Adams, who is a registered nurse, said Mitchell had practically no muscle mass left by the time of his death.

A few hours after Mitchell was arrested on April 22 by Portsmouth police officer L Schaefer for the alleged theft, William Chapman was shot dead by officer Stephen Rankin outside a Walmart superstore about 2.5 miles away in the same city. State prosecutor Stephanie Morales said on Thursday she would pursue criminal charges over Chapman’s death.

Except for a brief item stating that an inmate had been found dead , the story of Mitchell’s death has not been covered by local media in Virginia, and is reported for the first time here.

Adams said in an interview that her nephew had bipolar disorder and schizophrenia for about five years. Nicknamed Weezy, he lived with his mother Sonia and had been unable to hold down work. “He just chain-smoked and made people laugh,” said Adams. “He never did anything serious, never harmed anybody.”

Officials said that after his arrest, Mitchell was taken to Portsmouth city jail, where he stayed for almost three weeks before being transferred across the city to the regional jail on 11 May.

Ten days after that, the court clerk said, Judge Morton Whitlow ruled Mitchell was not competent to stand trial and ordered that he be transferred to Eastern State hospital, a state-run mental health facility in Williamsburg, for treatment.

The clerk said that typically in such cases “we do an order to restore the defendant to competence, send it to the hospital, and when the hospital has a bed, we do a transportation order, and he’s taken to the hospital.” Whitlow reiterated the order on 31 July and was due to review the case again on 4 September, according to the clerk.

But the hospital said it had no vacancy and the 24-year-old was therefore detained in jail until his death on 19 August, according to Adams, Mitchell’s aunt, who said she had tried to assist the hospitalisation process herself but was left frustrated.

“He was just deteriorating so fast,” she said. “I kept calling the jail, but they said they couldn’t transfer him because there were no available beds. So I called Eastern State, too, and people there said they didn’t know anything about the request or not having bed availability.”

When asked which state agency was ultimately responsible for ensuring Mitchell was transferred to the hospital, the court clerk said: “It’s hard to tell who’s responsible for it.”

Officials from the court, the police department and the jail could not explain why Mitchell was not given the opportunity to be released on bail.

Mitchell previously spent four months in the jail from April 2010, also on charges of petty larceny and trespassing, before being ordered released by the courts, according to Perry, the prison official.

She said Mitchell returned to the jail in January 2012, again on a petty larceny charge, before being released in May 2012 having spent a month in a state hospital.

Adams said medics at the jail told her Mitchell refused to take medication for his conditions. Before his arrest her nephew was on prescriptions for the antipsychotic drugs Prolixin and Zyprexin, and the mood stabiliser Depakote, according to Adams. She said prison officials then prescribed him the antipsychotic drug Haldol and Cogentin, which is intended to reduce the side effects of the other medication, but he refused to take the drugs.

Adams said prison officials said her nephew had also been declining to eat. She said she saw Mitchell in court in recent weeks and estimated that he had lost 65 pounds since being detained. “He was extremely emaciated,” said Adams.

The aunt said relatives had not been able to visit Mitchell because he had not given jail officials their names as approved visitors. “His mind was gone because he wasn’t taking his meds, so he didn’t have a list for anyone to see him,” she said.

Perry could not be reached for comment on the family’s claims about Mitchell. In the earlier interview, she said the 24-year-old had been housed alone in a regular jail cell comprising a bunk with a mattress, a toilet, a sink, a shelf and a slit-like window. She said she did not know the size of the cell and declined to estimate.