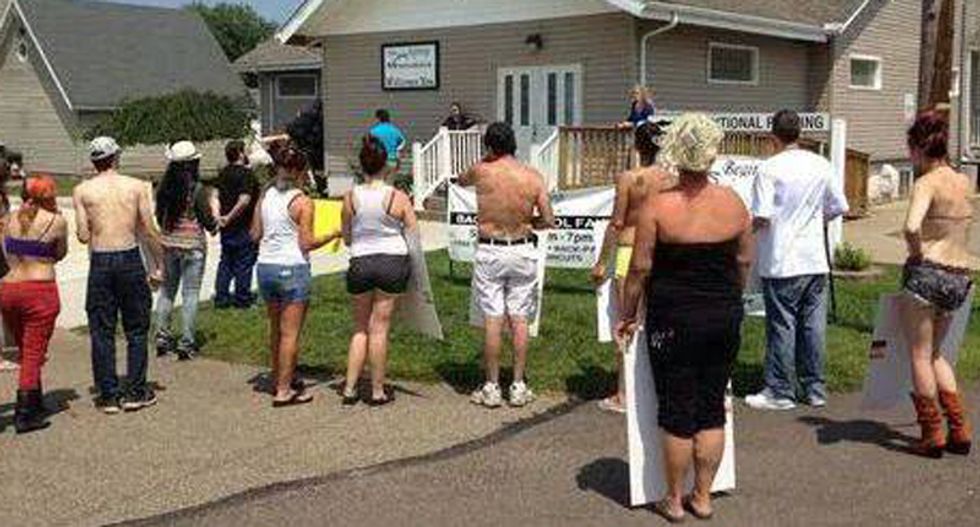 A years long war between an Ohio church and local strip club has taken a turn for the litigious as the church pastor filed a lawsuit against the club's owner and his employees over what he considers harassment, reports the Columbus Dispatch.

New Beginnings Ministries in Coshocton County has filed suit against Thomas George, owner of the Foxhole, using multiple legal arguments including one that protects women's health clinics from anti-abortion protesters.

According to the suit, protesters have been threatening church members, blocking church entrances and exits, and violating the First Amendment right to religious freedom and the federal Freedom of Access to Clinic Entrances Act, which also applies to churches.

The war between New Beginnings and the Foxhole began nine years ago when church members protested outside the club, taking down patron's license plate numbers and imploring them to repent. The owner and employees retaliated by staging their own protests outside the church on Sunday mornings with some of the dancers appearing topless while holding up signs accusing parishioners who called them "whores" of being judgmental.

According to William Dunfee, the pastor of New Beginnings, the strippers have now gone too far and are threatening the churchgoers while exposing parishioner's children to their uncovered breasts.

The lawsuit states that protesters traumatized and intimidated children at the church with “ sexual slurs, nudity and obscene language” as well as scaring one family off.

“Young children were forced to be exposed to multiple female topless defendants protesting at the entrances and exits to the church,” the lawsuit states.

George denied the accusation of threats saying Dunfee “just don’t like a dose of his own medicine,” before adding that the pastor told him nine years ago, "I am here to run you out of business.”

The lawsuit asks for a permanent injunction ordering the protesters not to block church entrances, stay off of the church property, and cease intimidating its members and guests.