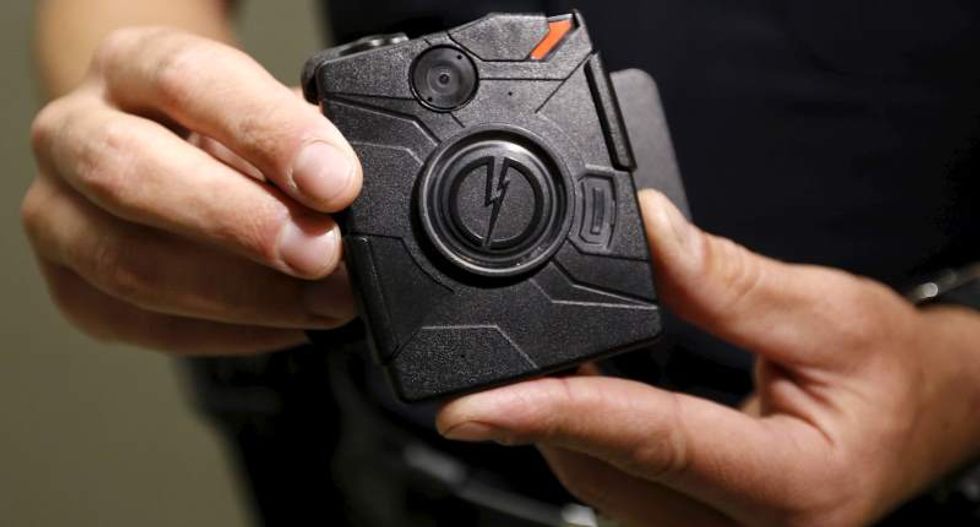 LAPD information technology bureau officer Jim Stover demonstrates the use of the body camera during a media event displaying the new body cameras to be used by the Los Angeles Police Department in Los Angeles, California on Aug. 31, 2015. REUTERS/Al Seib/Pool

A civil rights group asked the U.S. government on Thursday to deny Los Angeles police the funding they sought for body cameras for patrol officers, objecting to a policy that would allow the police chief to withhold video footage from the public.

The nearly 9,900-member Los Angeles Police Department is the nation's third-largest metropolitan police force and the biggest to commit to equipping all its patrol officers, numbering about 7,000, with so-called bodycams.

City officials say the cameras will build public trust after a series of racially charged police shootings and other encounters sparked protests and unrest in the United States.

The American Civil Liberties Union of Southern California agrees that bodycams are a potentially useful tool, but objects to a policy that would allow the city's police chief to withhold a video from the public unless a court orders it released.

ACLU officials also oppose an LAPD policy that would allow an officer who has used force against a person to review bodycam footage before talking to investigators.

"Appropriate policies are vitally important for ensuring that body-worn camera programs serve their intended goals of improving transparency, accountability and public trust in law enforcement, and do not do more harm than good," the chapter's director of police practices, Peter Bibring, wrote in a letter to the U.S. Justice Department.

Bibring also raised questions about how bodycams could collect footage of demonstrators and asked the department's Bureau of Justice Assistance to withhold money sought by the city's police to pay for 700 cameras.

Steve Soboroff, president of the Los Angeles police commission, said he was surprised by the letter, which came three days after the LAPD began handing out bodycams to officers at a patrol division.

Providing all remaining patrol officers with bodycams will cost about $10 million, including storage of the video, with the federal government contributing $1 million, Soboroff said.

The bodycams will reduce police use of force and complaints against officers and ultimately save lives, Soboroff said. The ACLU was involved in discussions over the bodycams, and their letter crosses a line, he said.

"I would have trouble sleeping at night if I was keeping L.A. from getting cameras," Soboroff said.

Soboroff said the policies would be reviewed later and could be revised.