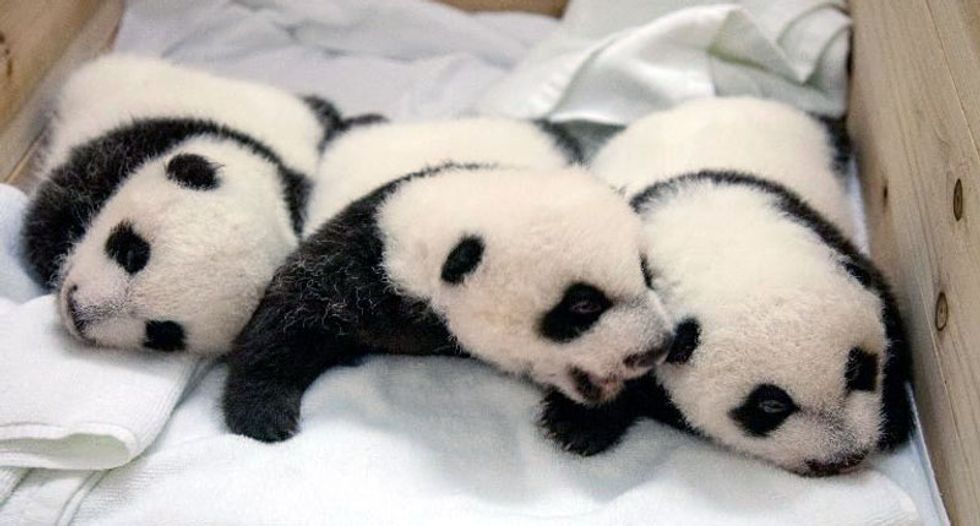 A set of giant panda triplets being shown to the public for the first time after they opened their eyes at Chimelong Safari Park in Guangzhou, south China's Guangdong province on September 18, 2014 (AFP)

The last time a newly born giant panda was named at the Smithsonian National Zoo, it took nearly three weeks and more than 100,000 online submissions. But when you are the first ladies of China and the United States, you get some perks.

On Friday, in front of dignitaries and more than a dozen third grade school children, Michelle Obama and Peng Liyuan announced that a male cub born on August 22 would be called Bei Bei, which means "precious treasure".

A shortlist of names had been drawn up by zoo keepers at the Washington zoo and the Wolong nature reserve in China. Bei Bei was a Chinese suggestion.

Bei Bei was one of two cubs born to the zoo's female giant panda Mei Xiang and sired by Tian Tian. Bao Bao, a female born in 2013, also lives in the panda enclosure.

Tian Tian and Mei Xiang have been in Washington since 2001 when they were loaned by the China Wildlife Conservation Association. Although the cubs were born here, they will be sent to China at around age four, according to zoo officials. A previous cub, Tai Shan, went to China in 2010.

The first ladies visited the zoo while Presidents Barack Obama and Xi Jinping met at the White House.

Standing in front of the panda enclosure Liyuan said the pandas were symbolic of relations between the two countries.

“Michelle (Obama) had said that the giant panda exemplifies the common bond between China and the United States,” she said through a translator. “That's a lot of responsibility for a cute animal like the giant panda… Well, I agree with her very much."

The giant pandas have become favorites with visitors to the zoo and have an online live stream of their activities, frequent pictures on Instagram, and a popular Twitter hashtag.

When Michelle Obama went to China last year, she visited a reserve for 80 giant pandas and pictures of her feeding apples to the pandas went viral.

While many political leaders on both sides agree that the Russian invasion necessitated an international response, there are many in the Republican Party who are ready for a fight over a defense sending bill that would provide aid to Ukraine.

Politico reported that the debate has become yet another one in the fractured Republican Party where the establishment is being opposed by the increasing ranks of far-right "America First" caucus. Even Donald Trump has come out against sending money to Ukraine, although he previously held up aid to them after Russia invaded Crimea and the House and Senate approved aid.

A video recently posted online shows a California woman having a racist public meltdown at the Boathouse Restaurant at Hendry's Beach.

"The video shows a local woman arguing with an employee of the Boathouse at its entrance near the walkway to the public beach, seemingly over an unpaid bill. Soleimani starts filming as the interaction gets more heated. The woman then turns to him and begins a slew of racist rants," local news site Ed Hat reports.