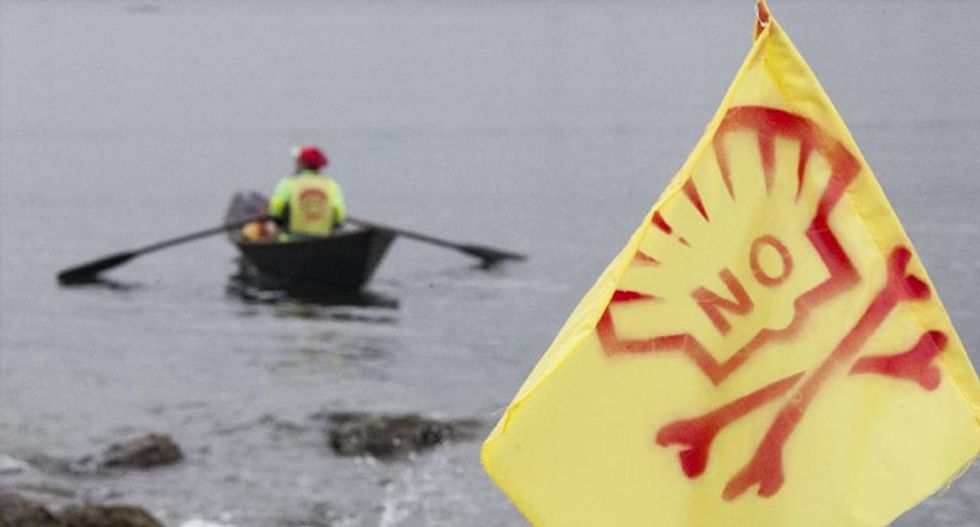 Royal Dutch Shell is ending its controversial offshore exploration in Alaska after failing to find sufficient amounts of oil and gas, the energy giant said Monday.

It comes as the world's biggest energy companies slash investment while grappling with tumbling oil prices.

Shell said in a statement that its Burger J well in the Chukchi Sea, off the northwest coast of Alaska, did not warrant further exploration, and that it would now stop its activities in Alaskan waters.

Environmental groups that fiercely oppose offshore drilling in the Arctic welcomed the move.

Shell, which is also slashing its headcount by 6,500 this year owing to sliding oil prices, described its decision to pull out of Alaska as "disappointing" and said it would take a major financial hit.

"Shell has found indications of oil and gas in the Burger J well, but these are not sufficient to warrant further exploration in the Burger prospect," the London-listed energy major said in the statement.

"The well will be sealed and abandoned in accordance with US regulations," the statement said, adding: "Shell will now cease further exploration activity in offshore Alaska for the foreseeable future."

Shell cited "the high costs associated with the project" and the "challenging and unpredictable federal regulatory environment in offshore Alaska" among the other factors behind its decision.

"For an area equivalent to half the size of the Gulf of Mexico, this basin remains substantially under-explored," it added.

Obama, justifying his move to allow Shell to drill in the area, had described US oil production as an "important" source of energy.

But environmental groups oppose drilling in the Arctic owing to the vulnerability of animals already struggling to survive because of melting sea ice, as well as the risk that a spill could pose to the region.

Shell had put its Alaskan drilling plans on hold in 2013 after a series of embarrassing problems with two rigs.

One, the Kulluk, washed ashore after breaking loose from towing vessels in stormy seas in southern Alaska in January that year.

Another, the Noble Discoverer, was recently cited by the US Coast Guard for numerous safety and operational deficiencies.

In 2010, the explosion of the BP-leased Deepwater Horizon rig in the Gulf of Mexico killed 11 people and spewed 4.9 million barrels of oil into the ocean.

The US Geological Survey said in 2008 that within the Arctic circle there are 90 billion barrels of oil and vast quantities of natural gas waiting to be tapped, most of it offshore.

Shell, which said Alaska remained an area of major importance for US energy supply, added that its withdrawal represented a hit of about $3.0 billion (2.7 billion euros) on its balance sheet plus $1.1 billion of future contractual commitments.

Earlier this year, Shell unveiled a mega-takeover of British rival BG Group worth Â£47 billion ($73 billion, 67 billion euros), as the two firms consolidate their positions in a sector slammed by the oil price slump.

In July the group reported second-quarter net profits of $3.986 billion, down about 25 percent from the equivalent period of 2014.