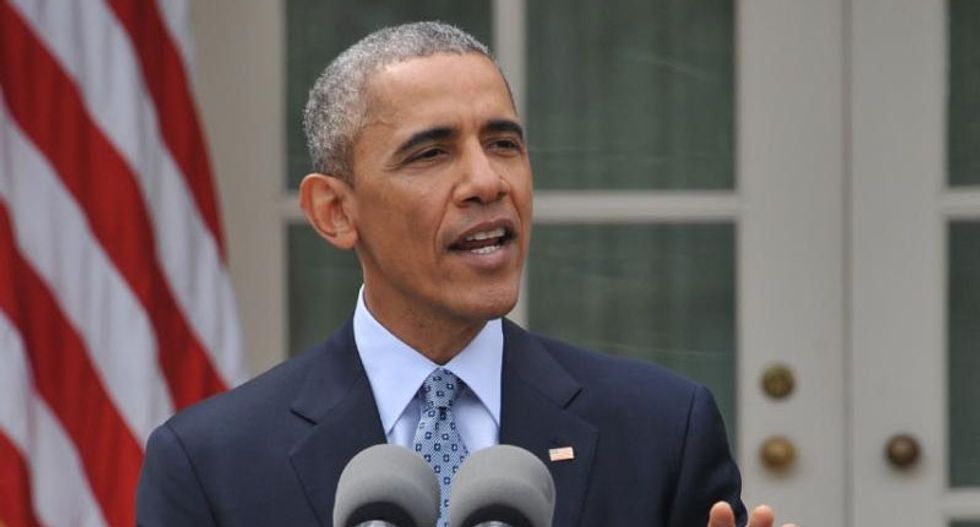 US President Bararck Obama makes a statement at the White House in Washington, DC, on April 2, 2015 (AFP Photo/Nicholas Kamm)

"This whole anti-immigrant sentiment that's out there in our politics right now is contrary to who we are," Obama said during a town hall meeting at an Iowa high school.

"Because unless you are a Native American, your family came from some place else."

The president had come to Iowa to discuss new education policy proposals, but the question and answer session with residents focused on the 2016 election. Iowa has the first say in determining who will become the presidential nominees of the major parties.

Real estate magnate Donald Trump, leading in the polls among Republicans vying to be their party's presidential nominee, has triggered criticism -- and headlines -- for his inflammatory comments about immigrants since the very start of his campaign, when he said Mexico was "sending" criminals including "rapists" across the border.

He has kept up that theme since, calling for illegal immigrants to be deported and for the constitutional right through which those born on US soil are automatically US citizens to be eliminated.

Many of the Republican candidates trailing him in the polls have picked up on his rhetoric.

Without naming Trump or his rivals, Obama denounced that on Monday. "We can have a legitimate debate about how to set up an immigration system that is fair and orderly and lawful," Obama told the crowd.

"But, when I hear folks talking as if somehow these kids are different from my kids, or less worthy in the eyes of God, that somehow they are less worthy of our respect and consideration and care -- I think that's un-American. I do not believe that. I think it is wrong."

Obama had made immigration reform a campaign promise in 2008, but he focused on other priorities early on in his administration and his recent efforts have been hampered by a Republican-dominated Congress.

Since the end of last year, he has resorted to signing a number of executive orders on immigration, giving approximately five million immigrants in the country illegally a path to legal status. Those measures include allowing parents of US citizens or permanent residents to seek a three-year work permit if they have been in the country since the start of 2010.

Some 11 million people, mostly from Mexico, are thought to live and work in the Unites States illegally.